These artifacts are "commentaries by themselves". They provide keys to the understanding of creativity and identity that prevailed at the time of their creation.

While abundant documentation exists concerning the history of the Kingdom of Kongo, the Kingdom of Loango is much less documented by the written sources.

The Vili have very early maintained relations of equal to equal with the Westerners, especially in trade. However, this contact with the west and engagement in the slave trade enriched a tiny minority at the cost of upsetting the societal structure of the Vili. The epidemics of trypanosomiasis and smallpox further drastically decreased the population of this people.

Depending on the source and context, there are several forms: Bavili, Bavilis, Fiote, Ivili, Loango, Vilis. The term fiote ("black"), used by Portuguese settlers, is now considered pejorative. The term of Vili also refers to their cultures, and traditions.

They speak the Vili, a Bantu language whose number of speakers was estimated at 50 000 in 2010. Approximately 45 000 were counted in the Republic of Congo and 5 000 in Gabon. The other known names and dialect names are : Civili, Civili ci Loango, Civili ci Moongo, Civili ci Waanda, Civili ci Yombe, Fiot, Fiote, Tshivili, Tsivili. The close ethnic group are: Kotchi, Lindji, Ciyoombe, Woyo, Yombe, Yoombe.

In 1957, the anthropologist Maurice Chabeuf estimated at 36 000, the number of Vili nationals and wondered how this people had not yet disappeared despite all these endured scourges.

Nowadays, most of the villages are located along the routes of communication (roads, CFCO).

Outside Pointe-Noire, the economic capital, the population density of the Kouilou is generally very low. From 1.7 hab./km2 to 1984, it rose to 6.8 hab./km2 in 2017. however, there are areas of tension for access to natural resources (hunting and fisheries) and land control, such as the Conkouati Lagoon.

Although spared during the civil wars of 1993 and 1997, Pointe-Noire and its hinterland will see a mass flock of migrants from the Pool Department and the countries of the Niari. The unsuitable infrastructure still does not allow to this day to absorb this overflow of population. which accentuates land pressure.

Si in Vili language or Tsi in Yombe language refers to inclusive land and its resources, the territory, the country. Members of the matriclan (likanda) have in community land, goods and interests visible and invisible. Clan territory (Si likanda) limits are set by the geniuses, force spirits of the ancestors of the clan (nkisi in singular and bakisi if plural) and not by men. These limits may be rivers, hills, edges of forests...

The ministering spirits prefer quiet places and migrate to more peaceful places, when they are disturbed, thus causing the migration of the clan. The places of residence of the geniuses (tchibila) or sanctuaries are sources, rivers, mountains (Mount Bamba in the Mayombe), circuses (Diosso Gorge), the gorges of Sunda, isolated trees or groves.

The State grants operating permits to the oil companies (Total, ENI)... and other industrial companies like EFC (Eucalyptus fiber Congo) formerly UAIC (Unit of industrial afforestation of the Congo). Thus, concessions were granted to plant 10,000 ha of eucalyptus around Pointe-Noire, Hinda, Loango Bay and North Bas-Kouilou .

The State also guarantees every Congolese citizen the possibility to settle anywhere. The motto of the Congolese Party of Labor (PCT), the former single party "everything for the people and for the people" served to bail from populations of other regions to settle in the Kouilou. However, authoritarianism and the predominance of the populations of the North to power was favored them in this land game at the expense of the people of the South (Vili and Yombe in mind).

With the sovereign national conference of 1991, the restoration of the kingdoms of Loango and Anziku (Teke) was followed by a claim of the restoration of the "ancestral custom". The holding of this line was none other than François-Xavier Tchitembo, better known under his title of Ma Mboma Si Loango (Prime Minister of the Kingdom of Loango), Mayor of Bwali (Diosso) even Chief Tchitembo. This last undertook a restoration of the lineal power campaign, including the meeting of 6 July 1994 at Matombi (fishing village). He said that the return to the clan land tenure is a way to regulate the scarcity of game, the decline in the fishery and agricultural resources.

To weigh against the State developer and industrial operators, some people that are part of the regional elite are organized around the regional Association of the earthlings of the Kouilou (ARTK) established in 1992. This institution has allowed clans owners of the land on which the UAIC (plant of industrial afforestation of the Congo) had planted eucalyptus trees, to conduct illicit cut of wood, to get their land back and highlight. Indeed, without consultation with the heads of land, nor farmers who worked there, the administrative authorities have conceded these lands at the UAIC, considering them as unoccupied, while they were left fallow for 5 or 6 years.

With rampant expansion of the city of Pointe-Noire, the landowners, failing to highlight the territory in a concerted way, just sometimes practice that real estate speculation by selling plots of land to the highest bidder. So on the periphery of the economic capital, the satisfaction of immediate and individual needs takes precedence over the preservation of the heritage of the future and the collective interest.

The natural resources of the Congolese coastal plain and the outlet is Pointe-Noire, the economic capital, attract immigrants from the four corners of Congolese territory, including the inhabitants of other areas of the Kouloiu.

Thus, in the absence of a job employee at Pointe-Noire, migrants engaged in the areas of fishing, agriculture or hunting. Thus, since the sixties, Teke from Ewo and Okoyo District in the Congolese basin (the basin of the Alima), settled in the marshes of the Ntombo and on the shores of lakes and lagoons crossed by the Loeme river to process fishing.

Moreover, the Teke and the Mbamba (Group Kota) from the Massif of the North, in the Lékoumou Department, engaged in hunting in the Massif of the Mayombe where they settled and in the park of Conkouati-Douli. Finally, around and near the pontenegrine settlement, some people from Pool department practice agricultural activities in rural areas.

In the Kouilou region, who do not have the attributes of sovereignty in the village where he was welcomed, is simply a resident and is called in Vili language Nthundji.

One can be surprised that a civilization as rich as vili culture cannot leave monuments or ruins, testimony of the events of the distant past. This is to forget that in Loango country, you do not build homes or other sustainable buildings using materials. The traditional cabins were made in panels of Papyrus or Aframomum.

The typology of the villages is indicative of traditional rural life in its historical, socio-cultural and environmental development.

General speaking, the villages are linear and so-called "villages-routes", because of their location along the roads. Habitat within the village is more often split or subdivided in the middle of savannah. However, the habitat becomes more consolidated near sites of the rivers, forests and roads.

According to beliefs, anyone building a hut with long life materials, is irremediably condemned (death, misfortune, bad spells, fires, diseases...). These beliefs and the fetish so accentuate the fragmentation of the Vili rural landscape, the plots inhabited being continually on the move.

The dispersion and the movement of Vili rural habitat tell us about the individualistic or independent behaviour of Vili people.

The tremendous mango trees and groves across the savannas are the witnesses of this permanent transhumance of villages. Their size (height) give an indication of the age of the village.

This traditional custom may explain why the Vili are so badly housed, fearing by supertition, to be accused of witchcraft in compensation for the construction of a lavish home. This also explains the propensity of the Vili, unlike their neighbors, Yombe, to not be attached to their land.

In addition to the housing cabins (shelters for the night) and the kitchen huts (places of women), the "Moandza" or palaver hut, is the privileged place of meetings, exchanges, rest and craft activities of the masculine. Indeed, this place in which men spend most of their time, is an excellent observation post thanks to its close positioning to the road.

At the same time, the modest home of Moe Poaty III (crowned Maloango 18 March 1931 until his death on 3 May 1975), built in 1952 by the colonial administration and which he used as his residential Palace, was abandoned for six years. Indeed, none of these successors wanted to settle there. Under pressure from the Government, the Royal residence then turned museum that opened, on 10 April 1982, Jean-Baptiste Tati Loutard, Minister of High education and, Minister of culture and arts.

In Pointe-Noire, the second area said illegal out of the ground in the 1950s after the ward "4 Km" is called also "Quartier planches" ("Plank ward"). The Catholic Church of St. Christopher of Mvoumvou, nearby was originally entirely built in white wooden planks. Which sometimes causes the laughingstock of newcomers on Pointe-Noire to the Vili, because they are not aware of this aspect of their culture.

The Vili traditional society as well as all the ethnic groups of the Kongo group, is characterized by a main structure called Likanda. This is the clan whose members possess in community and in common the goods and interests visible and invisible. Within this matrilineal society, the territory of the clan (si likanda) as well as its limits are managed by the elder of the maternal uncles (ma Nkashi or Fumu si). The word SI in expressions si likanda or Fumu si designates both the land on which the clan is established, but also all the resources therein.

Some groups lead initiation rites (tchikumbi) for girls that were apparently part of engagement. The tchikumbi takes place after the marriage proposal has been made. In one rite, the young girls, with their ladies painted and adorned with necklaces and bracelets, lived together in a special house. At night they held dances for the purpose of meeting with their possible future husbands. After two or three months the girls resumed their normal way of life. 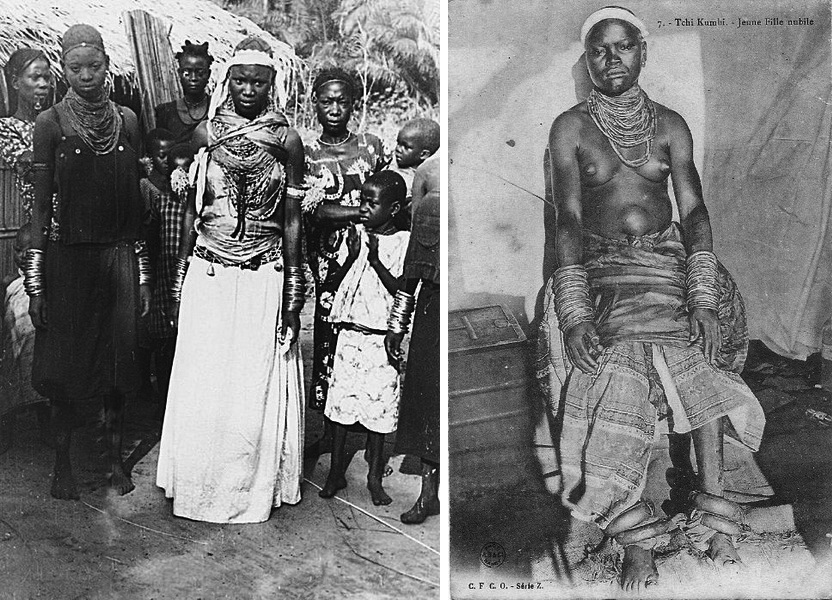 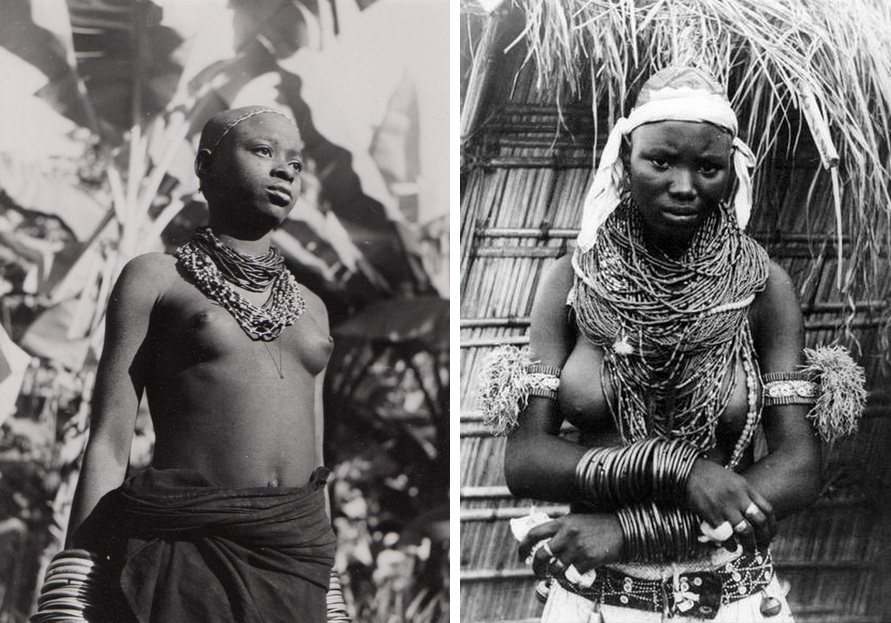 Stretching across the Atlantic coast of Gabon, Cabinda and the People’s Republic of the Congo, the matrilinear people Vili are famous for their artistic diversity. Vili artists carved with naturalistic features maternity figures, nail fetishes, figures of dogs and monkeys often carrying mirrors, nkissi (magical objects) or nails.

The face masks of the Vili are characterized by a realistic design and a striking color scheme. The Vili give their masks a veritable expression of pathos by painting them black, white and red, and leaving the mouth slightly open. The two-faced ndungu mask in a massive attire of plumage, is worn by the medicine-man at the coronation of a prince, when invoking the gods to send rain, or pronouncing divine judgment. Other masks, by contrast, which have a symmetrical painted design in white and black, are employed in ritual by Basundi of the Bakhimba sect, which runs the bush school.
Each masquerade has a name that is revealed not by the wooden mask itself but by some other object that is part of the costume; the name refers to a proverb that conveys a moral message. The masks appear in groups to dance at important funerals and other occasions of potential disorder, serving as a kind of police force.