The Koro, Jijili or Megili of Nigeria are numbering 111,000 (Peoplegroups.org 2022). This people group is only found in Nigeria. Their primary language is Lijili.

The Jijili of the region of Kafin Koro were known in colonial sources as the ‘Koro Huntu’, literally ‘naked Koro’. This is an offensive term and should be expunged from all further writing. The correct term is ùJíjìlì for one person and aJílílí for the people, suggesting that Jijili is an appropriate reference name.
These Kafin-Koro people further claim that the tribal name Koro came from a Hausa corruption of the term Ofro which is a type of bag they still make. But other sources say the term Koro is the Hausa for "drive away" and was given this group of people because they had suffered continuous raids as a result of which they were always driven away to new places. 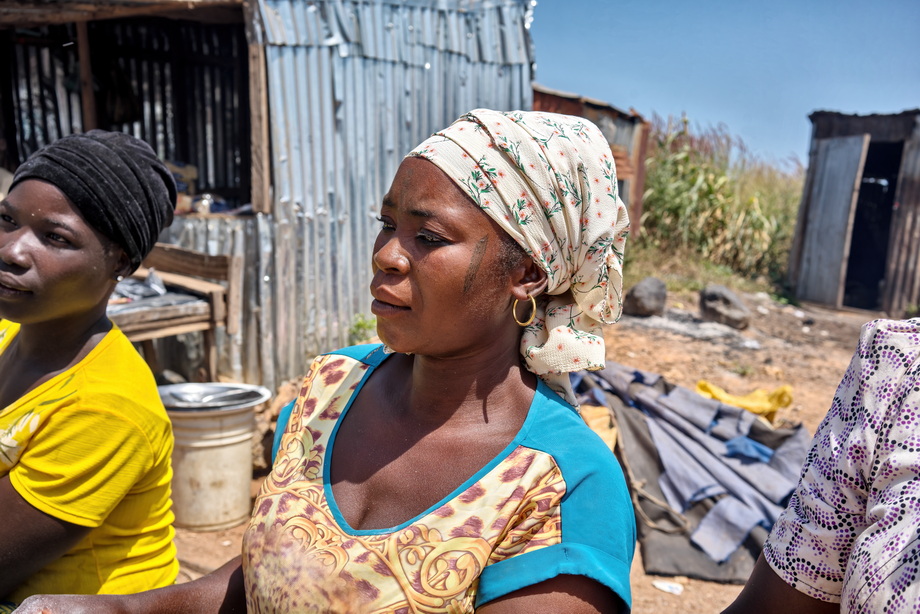 The main settlements of the Jijili are Kakuri, Abolu, Kwagana, Sikiti, Aboroson, Kudami, Pini, Naniti and a number of others. These are all situated between the main road from Suleja to Minna and Adunnu. The Jijili of Kafin Koro recognise related subgroups as follows: Ojijili-o-Lafia (around Lafia in Plateau State), Ojijili-o-Kaduna, Ojijili-o-Zuba (near Suleja), Ojijili-Saako, and Ojijili-Bekase. They say that though there are differences in the way the groups speak, they understand one another.

Jijili in small towns such as Kafin Koro and Adunnu are tending to lose their language in favour of Hausa, but in most villages Jijili is still apparently healthy. To judge by the number of villages, there must be at least 7-8000 Jijili.

Temple (1922) uses the names Zuba, Nja and Funtu. The Koro are a widespread group of people found in Plateau, Niger and Kaduna States of Nigeria. Those in Plateau are called Jili while the rest are called Jijili.
Grimes (1992) gives their population as 299,447 (in 1990). Her figure is doubtful owing to the fact that she locates the Koro only in Kaduna State. She also gives 50,000 for Lijili, obviously Koro of Lafia, making the total 349,447. But other writers give many more: Koron-Ache, Koron-Agweshi, Koron-Ala, Koro-Funtu, Koro-Zane, Koron-Lafia (Jili), Koron-Gwandara, Koro-Phoware (or Phonare), Koro-Ganagana (Koro-Ndulu or Afiki), Koron-Ija, Koron-Zuba, Koron-Kenyi (Jaba) and also Lungu "closely associated with, if not an actual segment of
Koro of Zaria province" (Wente-Lukas, 1985). In this research, however, treat many of these as separate tribes.
Their language is closely related to Gbagyi (Gwari) and Gwandara. As can be seen above, many previous writers present the Koro as rather a combination of several groups under one name and say that the term Koro is used as a cover term for several languages. It is not clear, however, to what extent these "several languages" are lexically similar or otherwise.
Koro people are quite modernised but those in Plateau State place higher in terms of exposure to education than the rest of the Koro groups. Generally, they have a positive attitude towards schooling and health care, but they prefer traditional farming methods. Being farmers, they grow yam, maize, guinea-corn, ginger and rice. They are warm to strangers. 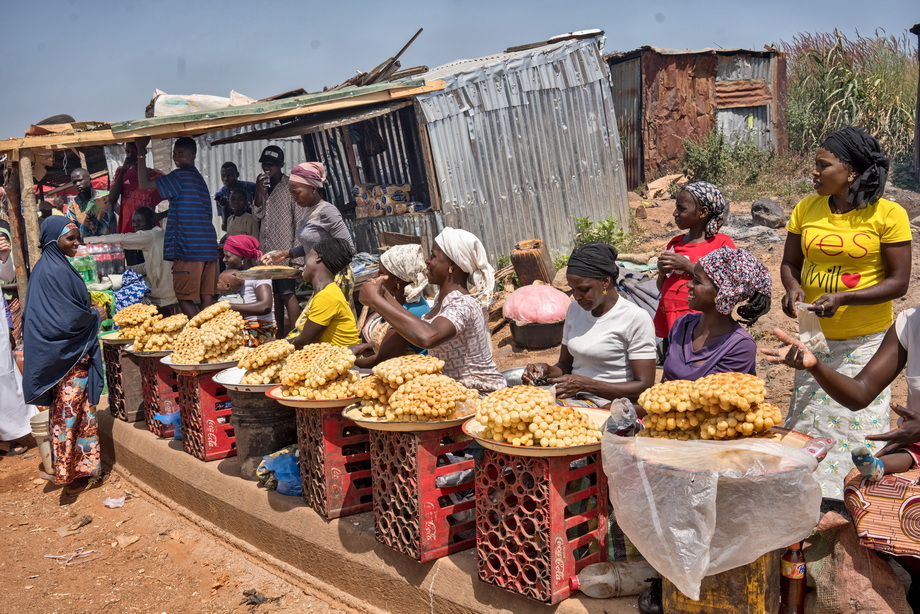 Many Koro claim they originated in the Borno area. Some say they were living at Kano under Hausa rulership.
But the Hausa could not really control them, so they asked the Kanuri to help them against the Koro. In this way, the Koro were driven away from Kano, and as they escaped, some went towards Lafia (Plateau State), some to Kubacha (Kaduna State) and others went to the Suleja and Kafin-Koro areas. At Suleja they were again under a Hausa ruler who used them to fight against their own brothers (from Kafin-Koro). They got to know this only when they saw an arrow left behind by the Kafin-Koro people and they recognised it as the work of Koro craftmanship. So they stopped fighting their brothers. Those who came to Kubacha had earlier settled at Zaria but queen Amina's forces drove them away so they fled to Kubacha. They claim that the first wife of the Emir of Kano (grandfather of Ado Bayero) was a Koro and the first wife of the Emir of Suleja was also a Koro. But this is disputed by others.
Temple (1965) wrote "They all claim to have come from Bornu . . . The Zuba were the first to come and settle at Chachi . . . They were followed at the end of the 18th century by another section of Koro, Muhammedans . . . to Zuba."

Women about four months pregnant begin to receive special treatment. They are given some locally made medicines which they drink and also use when bathing. If a woman in labour is having problems, she is treated with a certain concoction and elderly women attend to her. Infants remain indoors for about three days or until the umblical cord falls off. On the day the child is taken out, the grandfather pronounces his name. The child is taken through some religious ceremonies so as to provide spiritual protection for him.

When boys reached the age of three or four years, they were circumcised by a specialist. Following circumcision, the boy would not eat any draw-soup like okro but only leafy vegetables like spinach. After the wound was healed, wild game was gotten from the bush, and a day long feast held for the boy in which much food was available but no beer. Nowadays, only few practise this. Boys are taken to the Okpili shrine after circumcision and initiated to the cult but as they grow up, they are told the secrets of the cult in detail.

Parents of two families arrange between when both mothers are pregnant, that their children, if opposite sexes, will become husband and wife. Following delivery of the girl, the parents of the boy bring a log of wood and a bundle of stubble (dried stems of guinea-grass) to the mother. A measure of guinea-corn is also brought in the first year but in each succeeding year, they increase it by one measure. One other responsibility during the courtship period is for the parents of the boy to build houses for those of the girl. Not too many people still do this. After the courtship has been successfully done, a day is fixed for some female relations of the boy to go and collect the bride from her parent's house. But she is kept in the house of one of the friends of the groom till the wedding day. On the wedding day, elders and people gather at the groom's compound; the ladies again go and escort the bride to the groom's house. The ladies also bring plenty of firewood which is used for cooking during the wedding feast and the rest is shared among the elders. After eating food and rejoicing with the bride and groom, all the people disperse. The bride does not commence cooking food until after about three months when her parents have brought to her all her kitchen utensils. She may, in the meanwhile, cook in her mother-in-law's kitchen.

A young person is buried immediately while an elder is buried on the following day, after a festival involving dancing and feasting. A bigger festival follows after a year. They used to bury several persons in one grave which was dug with one opening but two spaces in the ground so that another body could be laid in the second space later. Whenever they were sure that the other body had decayed, they could use the same grave for another body. The specialists in burying the dead used a powder called Awonorebei to stop the smell.

The various Koro people are under various traditional heads. There is no single head over all the Koro people.
Most of their chiefs (Choazie) are either second class or third class, except that of Lafia who is a first class chief.
The former traditional system is giving way to the new traditional arrangement which is externally imposed on the people. The government plays a strong role nowadays in selecting the chief and he may not be the popular choice. But they are not under any form of political oppression. They respect their rulership which is according to tradition more than the Hausa style of rulership.

A person coming to a group of people says Vei sawah - (Good morning) and the people respond Maa vuwa or Maabewah (Welcome). If they are inside the compound or a house, he enters and takes permission to greet them.
Being permitted, he squats and asks a series of questions after their well-being, and answers that it is well with him. If the people he is greeting are elders, he rubs his palms against each other as a sign of respect. For women, mere welcome is sufficient.

Osi is the name for the Creator God who lives in heaven and is not involved in human affairs. Okpili is the deity that is directly involved with men. Okpili, represented by a masquerade, is considered stronger than both Osi and Osi's priest, Uvwechi. Okpili has the power to heal sick people and to protect from harm. The function of Uvwechi is to collect offerings brought to Osi and Okpili. He also treats sick people.
Ile is the diety for rain making and can also cause excessive rain to stop. When the people are in need of rain, the priest or elders make a paste of ashes and pour it into a pot inside the Ile shrine. The priest can do the same rites for rain making in order to cause rain to stop. But he must not drink water within three or four days after the sacrifice to stop rain has been made. If he does, rain will commence again.
Ogatugba is an object that is consulted for solutions to a variety of problems. The consultation is done through an Ozekpiliaga (priest).
Onyotugba is a deity that can cause disability to both humans and animals; so it needs to be pacified with sacrifices.
Festivals of the various gods are held at various times of the year but all have the same features which are: much eating of food and meat, sacrifices and no dancing. Strangers are not allowed to participate. There is no festival involving all Koro groups together. Each group has its own separate festivals.
Some 35% of Koro are Christians and 30% are nominal Muslims.

Despite their appearance in ethnographic works, no linguistic data on Jijili has ever been published or circulated. On the basis of a short list collected by Roger Blench in 1982, Jijili was classified together with Jili [Jili], the Koro of Lafia, a language substantially better know through the publications of Stoffberg (1975). This was circulated as a comment and published in Gerhardt (1989) and Crozier and Blench (1992).
Discussions with Jijili speakers suggested that they are aware of the Jili people and of the connection between their languages.
The term ‘Koro’ is widespread as an ethnonym in Central Nigeria and Gerhardt (19xx) has published data on the Koro spoken in the Kadarko area. Following unpublished work by Blench, this Koro is now subdivided into Begbere, Ashe and Myamya. However, neither Jili nor Jijili show any particular relationship with these languages and this seems to be a case of a floating outsiders’ name applied to quite distinct peoples.
However, there are two more groups of Koro, the Koro-Ija and Koro Zuba reported initially in Crozier and Blench (1992). These are spoken near Lambatta on the Suleja-Minna road and near Zuba rock on the main Kaduna-Abuja highway. No data was available for these languages, then as now, but discussions in Adunnu suggest that they are related to Jijili. It is likely that ‘Jili’ is the base ethnonym of these peoples and it is here used to refer to the group. The following proposal is therefore made:

The historical scattering of these languages is something of a puzzle, as Lafia is quite geographically remote from Kafin Koro. The explanation may lie in the precolonial slave trade which was apparently responsible for the similar dispersal of the Basa peoples.