The Karoninka people (also called Karone) are an ethnic group in West Africa related to the Jola. They live mainly in Casamance, Senegal, on the right bank of the Casamance River and the islands in the mouth, but also in The Gambia.

Tradition and Rites of Passage

In their tradition story tellers are known as a "griot". They are considered to be historians, poets, musicians and entertainers all in one. They use props, flutes, harps and make songs as they perform each region has a traditional feasts according to its own calendar. In the Casamance region the own Oussouye hosts an annual royal feast day. It is held at the end of agricultural seasons and before the beginning they follow Islamic custom in their rites of Passage.

Intiation rites among Karoninkas is to build courage and endurance, communicate traditional and pratical knowledge of life,  and transfer responsibility to a younger generation and some of the knowledge it is believed it cannot be shared. 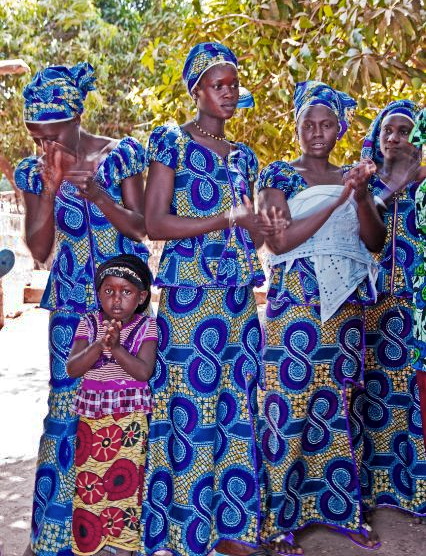 In Karoninka Culture the food is rice with a spicy sauce and vegetables,  tomato sauce with  fish,  vegetables such as carrot, cabbage, green peppers. Yassa is a dish from Cassamance with chicken or fish marinated in lemon juice, pepper and onions,  and accompanied by plain rice including sauce known as máfe domafa and soupe. Kandja which is made from Okra,  fish and palm oil,  meals include roasted or grilled meat with beans, steamed millet with vegetables, mutton and gravy is a ceremonial dish.

Drums also play an Important role in Karoninka Culture,  the tradition rhytms of Sabar and tama drums still from the back drop to one of the popular types of music there is a mixture of the African and Cuban sound.  It is believed Bainuk,  Manjack, Jola, Karoninka and Bandia lead lifestyles which is similar both music and dance play an integral role,  and distinctive traditional music such as Yela, the rhythm of which mimic the sound of grain being pounded by women is still praticed many people in present day Senegal,  their musical instruments such as Kora and hoddu are still played during ceremony.