The Harari people ("People of the City") are Semitic-speaking ethnic group inhabiting the Horn of Africa. Members traditionally reside in the walled city of Harar, called simply Gēy "the City" in Harari, situated in the Harari Region of eastern Ethiopia. They speak the Harari language, a member of the South Ethiopic grouping within the Semitic subfamily of the Afroasiatic languages.

The Harari are the small remnants of a unique, pre-industrial urban culture that has existed since the 1500s. Until 1974, the Harari, lived exclusively inside the stone walls of Harar, an ancient Muslim city, where they specialized in trade. Over the centuries, Harar, which is located on a highland ridge between the Red Sea and the Ethiopian highlands, has been the dominant center of Islam for northeast Africa. Although recent political and economic changes have dispersed the Harari, they have continued trading in the region.

The Harari are the only Ethiopians whose trade is based in a single, large urban center. Daily the Harari have contacts with four other competitive ethnic groups who frequent the markets of Harar. However, they have maintained their distinctive qualities. To help preserve their unique culture they limit the use of their native language, Adare, to their own people. They also strongly discourage marriage to non-Harari. 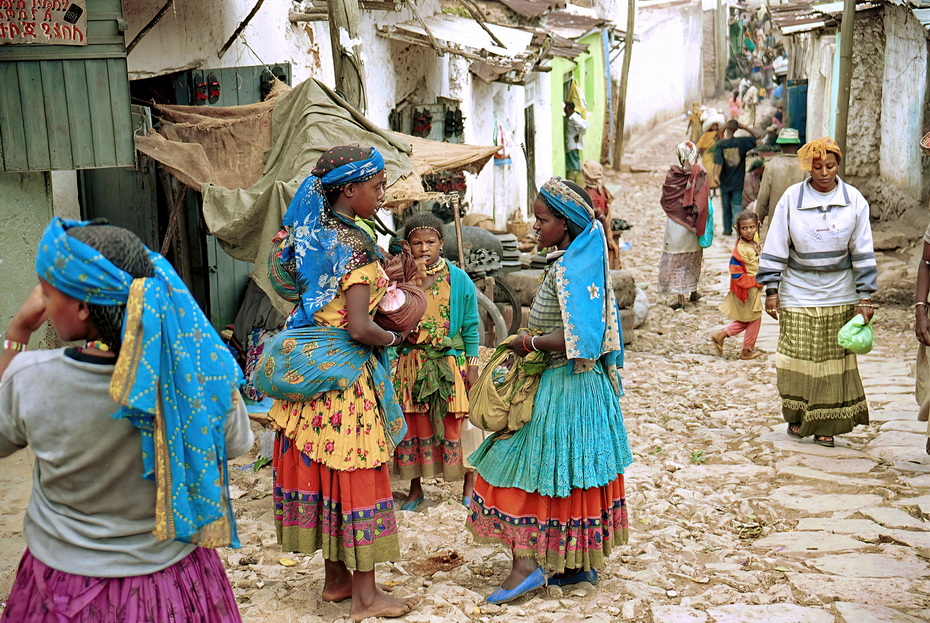 While the Harari are called Adere by their ethnic neighbors (the Somali, the Oromo, the Argobba, and the Amhara), they refer to themselves as ge usu, or "the people of the city." They call their way of life ge 'ada ("the etiquette of the city") and their language ge sinan ("the city language"). Harari society is characterized by a complex set of obligations and ties, which provides a strong sense of social solidarity and excludes outsiders. The core of Harari society is built around kinship, friendship, and afocha, or community organizations. In regard to kinship, the Harari do not marry non-Harari. Friendship provides the Harari with a small group of trusted equals who remain friends throughout their lives. Characteristically, a boy forms a core of close friends from other neighborhood boys his own age. A girl becomes friends with the daughters of women who visit her mother. The afocha provides the Harari with social, ceremonial, and economic support for such occasions as weddings and funerals. Community organizations range in size from 50 to 75 members, and usually include aunts, uncles, and cousins.

Women make up a solid force in Harari culture. Unlike the women of many other Muslims cultures, the Harari women lead vigorous and visible-although separate-social lives. They are not required to wear the traditional Muslim veil. They contribute to their families' incomes by selling produce from their husbands' farms or raising and selling tobacco. One very important industry among the Harari women is basket weaving. In fact, Harar has become famous for its elaborate baskets.

Most Harari live in rectangular-shaped houses. The walls are made of twigs overlaid with clay and the roofs are made of thatch. The region surrounding Harar receives up to 40 inches of rain per year. This enables the farmers to produce enough grain to satisfy the city's needs. Various citrus fruits, mangoes, papayas, bananas, and other fruits are also raised. The cash crops are coffee and qat, a mildly hallucinogenic stimulant. The staple dish of the Harari is a spicy stew made with meat, potatoes, and vegetables, and eaten with sourdough bread. 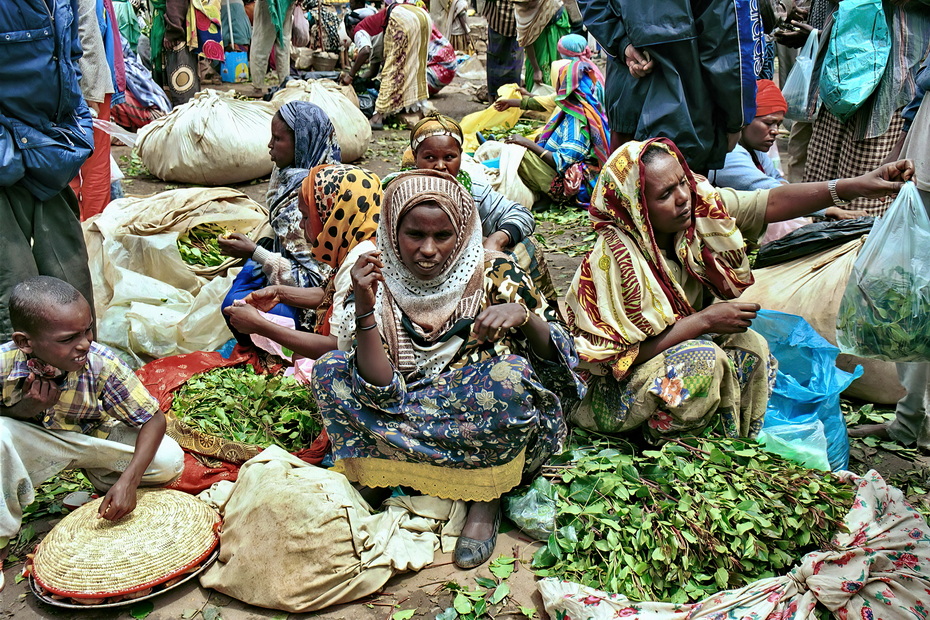 The Harari are virtually all Sunni Muslims. Despite pressures to change, the Islamic religion is strong among the Harari. The city of Harar is well known as a center of Islamic learning. The twin-towered Jami mosque is the focus of the community, although nearly every neighborhood has its own small mosque. The people attend the mosques regularly. Because Harar has over 150 shrines of Muslim saints, it is referred to as the "city of saints." Almost all of the adults in Harar fast during Ramadan, the ninth month of the Islamic year. Very few people drink alcoholic beverages. 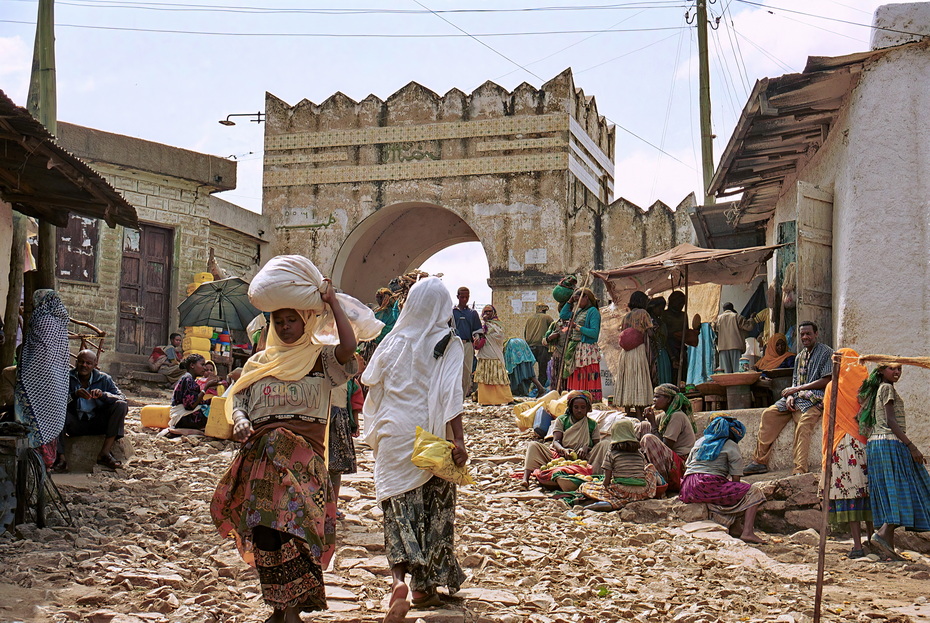 The Harari people speak the Harari language, an Ethiosemitic language referred to as Gey Ritma or Gey Sinan ("Language of the City"). It is closely related to the eastern Gurage languages and similar to Zay and Silt'e, all of whom are linked to the Semitisized Harla language. Old Harari already had many Arabic loanwords, proven by the ancient texts. Northern Somali dialects use Harari loanwords. The Zeila songs of thirteenth century origin, popular in Somaliland are considered to be using Old Harari. Historians states the language spoken by the Imams and Sultans of Adal would closely resemble contemporary Harari language.

Modern Harari is influenced more by Oromo than Somali and the presence of Arabic is still there. After the eighteenth century Egyptian conquest of Harar, numerous loanwords were additionally borrowed from Egyptian Arabic.

Gafat language, now extinct, was once spoken in the Blue Nile was related to a Harari dialect. Harari language has some form of correlation with Swahili and Maghrebi Arabic. Prior to Oromo encircling the Harar region, its postulated Harari speakers were in direct contact with Sidama, Afar and Somali.

The Harari language was historically written using the Arabic script and in characters known as "Harari secret script" of unknown origin. More recently in the 1990s, it has been transcribed with the Ge'ez script. Harari is also commonly written in Latin outside of Ethiopia.

The 1994 Ethiopian census indicates that there were 21,757 Harari speakers. About 20,000 of these individuals were concentrated outside Harar, in Ethiopia's capital Addis Ababa.

Most Harari people are bilingual in Amharic and Oromo, both of which are also Afro-Asiatic languages. According to the 1994 Ethiopian census, about 2,351 are monolingual, speaking only Harari.