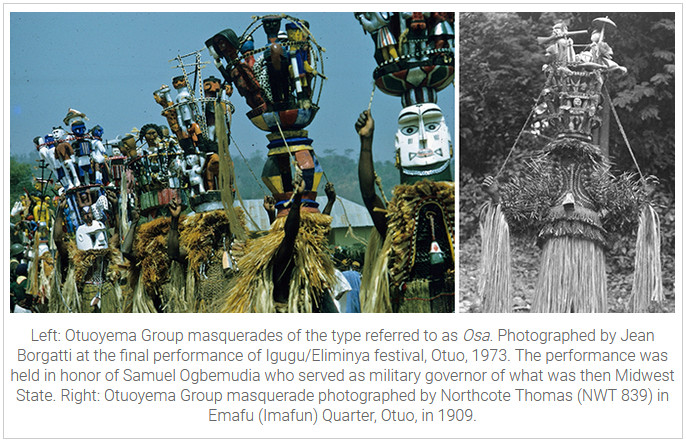 Otuo community life is based on the principle of age-grading. Community member and teacher, I. Igbafe, described a series of 13 grades through which passed age sets formed every 5 years. (The anthropologist, R. E. Bradbury, described 11 such grades). Each grade bears a name and has specific tasks associated with it as well as specific ritual duties and roles. Masquerade and dance regalia characterize each group through the Otuoyema, or first title grade – the group moving upward in the Eliminya/Igugu festival. Igugu is a cognate with the Yoruba language term Egungun that refers to ancestors and ancestral masquerades, and was the name used by my informants in 1972-3. (Yoruba is spoken widely in Otuo as well as throughout northwest Edo communities.) Eliminya is cognate with the Edo term Erivi meaning the world of the dead and unborn, residence of the gods, the ancestors and masquerade-dancers (Melzian 1937: 55-6). 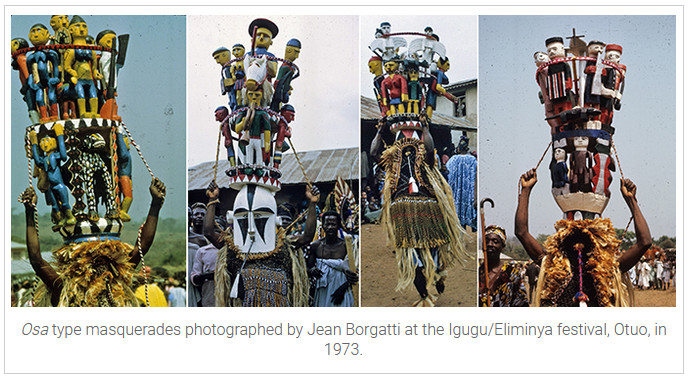 In Otuo, men between the ages of 45 and 50 both sponsor and wear masks and headdresses in festivals held to mark their entry into the group of community leaders. The sponsoring age group wears only two of the seven or eight mask types that appear, the others being worn by the age company above them. These masks are used for a season lasting 5-7 years and are thereafter destroyed. Consequently, they are almost unknown to the outside world. The masks incorporate a vast array of images that refer to ideas of power and leadership: leopards, equestrian figures, colonial officers, the Nigerian Army, heraldic angels and airplanes. The names of the masquerades belong to the esoteric lore associated with each age company, although the masks I refer to as ‘bowler hats’ are called by the popular names ‘umbrella’ or ‘helmet’ – names that suggest kingship or the military but in either case, authority.  These and the ‘whipping masquerades’ are those costumes carried by the sponsoring age company. The symbolism and significance of these masks also belongs to the esoteric lore of the association. However it is said that while the activity of whipping masquerades purifies the community, the ‘umbrella’ masquerades are enjoyed for their dancing.

All the masquerade headdresses are worn with a costume of woven raffia covering the performer’s head and torso, following the shape of his body. A fringed panel falls over his chest and shoulders. The section covering his head is embellished with a nose-like tassel. The lower hem of the costume terminates in long strands of fiber. The performer’s arms and legs, painted with linear designs, are partially visible through the fringe as is his cloth applique apron. (Today, shorts are worn rather than the backless apron worn in the past that left the buttocks exposed and visible as the fringe swayed.) Each headdress appears to give a distinctive name to the masquerade. In the parade of masked figures I witnessed in 1973, where the photographs that accompany this blog were taken, costumes worn with a towering feather headdress (Obagege), a central crest of straws bound together, and small wooden caps resembling women’s plaited hairstyles (Ogbigbia) precede the whipping masquerades (Olu), a type far outnumbering the rest since each member of the age group moving upward must wear this one. The wooden capped masqueraders are said to be for maintaining order during the public displays.

The ‘whipping masqueraders’ perform to disperse malevolent spiritual forces, each cracking  his whip in an attempt to achieve a sound approximating a gunshot. (Those who succeeded were greeted with a resounding cheer.) These are followed by the ‘umbrellas’ (Ugbokpa) and the wooden helmet masks (Ogbogbomudu). These characters are said to be linked to the rains, and perform humorous skits in the playing ground. The most elaborate masks and headdresses featuring figural superstructures (Osa) come a stately last. 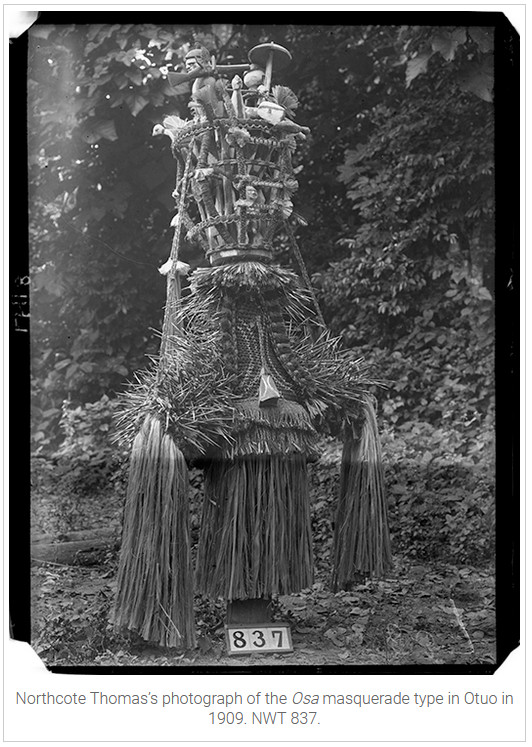 That each company moving upwards in the system must provide a new set of headdresses provides for the incorporation of new motifs into the compositions and new materials into their construction. Northcote Thomas photographed only three of these masquerade types in Otuo: the whipping masquerade (Olu) and the umbrella masquerade (Ugbokpa), whose later 20th- and 21st-century counterparts are dramatically similar, and one towering Osa masquerade that appears to have a canework superstructure into which are pegged multiple small figures. The final two types of masquerade I witnessed in the 1973 parade consisted of a helmet, usually janus-faced, surmounted by a superstructure containing multiple figures or simply a multi-tiered headdress with carved figures and animals attached to the basic structure, evoking the complex example photographed by Thomas.

My research in Nigeria was carried out between 1971 and 1974 under the auspices of the Federal Department of Antiquities and was partially funded by the following: UCLA Museum of Cultural History-Ralph Altman Fund and NDEA Title VI fellowships via the African Studies Center, UCLA.  Research in 2002-04 and in 2014-16 was carried out under a Fulbright-Hays teaching and research fellowship at the University of Benin in Benin City. I would like to thank the people of Otuo for sharing information and experiences with me, particularly Chief Erukpe Omokhudu, Mr Isaac Adokhai Afekhai, and Teacher Igbafe of Otuo for their personal assistance in 1973. In 2003, his Highness, Julius Elugbe, the Ovie of Otuo, was instrumental in facilitating my documentation of the festival. In 2016, his nephew, Professor Ben Elugbe, was my host during the masquerades’ morning walk-about.

This is the first in an occasional series of guest blogs for the [Re:]Entanglements project by Jean Borgatti. Jean received a PhD in Art History from UCLA in 1976. She has carried out research in Nigeria among Edo-speaking people north of Benin for over 40 years, beginning in the 1970s, returning in 2003-04 and 2014-16 on Fulbright-Hays teaching/research fellowships with a base at the University of Benin, Benin City. She has carried out research among a number of small ethnic groups with which N. W. Thomas interacted, notably the Okpella (Ukpila), Ekperi, Weppa-Wano, Avianwu, Uzairue, Otuo (Otwa), Ogbe and Ibillo, publishing on the Okpella, Ekperi and Otuo masquerade complexes in the journal African Arts. In this blog, Jean recalls her encounter with a photograph by Northcote Thomas reproduced uncredited in a 1935 publication entitled The Secret Museum of Mankind, and how this led to her own documentation of the same remarkable Otuo masquerade in the early 1970s. 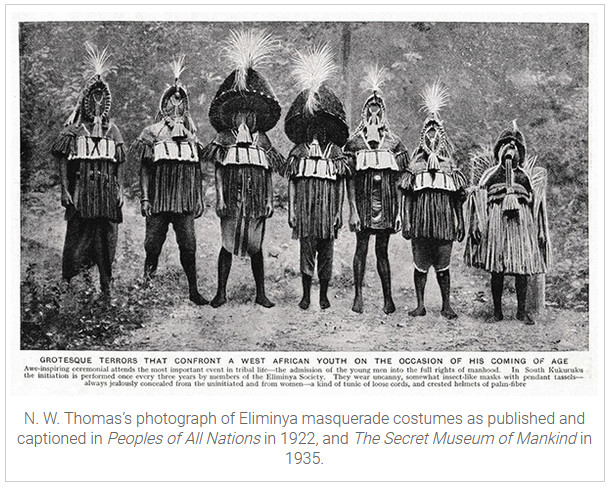 ‘Awe-inspiring ceremonial attends the most important event in tribal life — the admission of the young men into the full rights of manhood. In South Kukuruku the initiation is performed once every three years by members of the Eliminya Society. They wear uncanny, somewhat insect-like masks with pendant tassels — always jealously concealed from the uninitiated and from women — a kind of tunic of loose cords, and crested helmets of palm-fibre.’

So reads the caption to this heavily modified photograph, published in 1935 in The Secret Museum of Mankind – a work described on the website at which it has been digitized, as a ‘mystery book’, with ‘no author or credits, no copyright, no date, no page numbers, [and] no index’ (http://ian.macky.net/secretmuseum/). Advertised as ‘World’s Greatest Collection of Strange & Secret Photographs’, its accompanying texts ‘read like the patter of a carnival sideshow barker’, racist and sensational (ibid.). 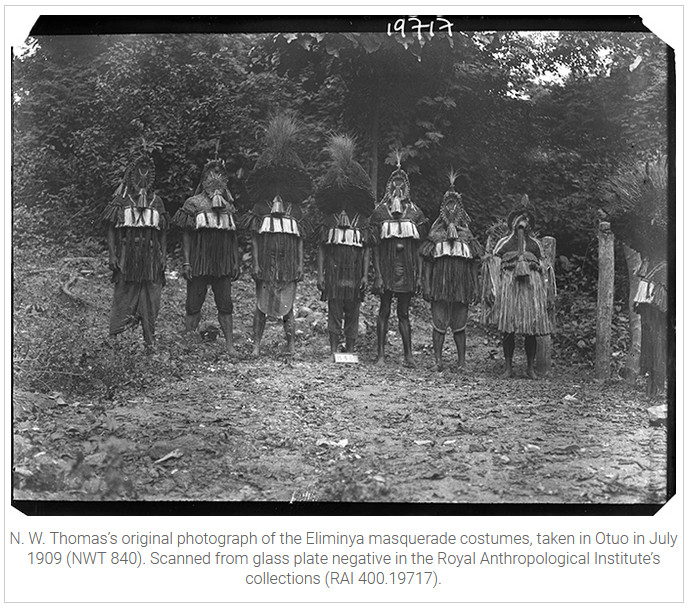 Like other images in the book, the photograph is not attributed in The Secret Museum of Mankind. We know, however, that it is one of Northcote W. Thomas’s photographs taken in Otuo (Otwa) in July 1909, in the north of Nigeria’s Edo State, of a festival he records as being called ‘Eliminya’. The photograph and the caption had previously been published in 1922 in a serialized illustrated encyclopaedia entitled Peoples of All Nations edited by J. A. Hammerton. N. W. Thomas provided numerous photographs to sections on the ‘British Empire in Africa’ and contributed an article on the ‘manners and customs of its native races’.

At this time two particular cultural arenas effectively disseminated knowledge of Africa to the European public: the displayed classification of material culture from Africa in ethnographic collections in local and national museums (such as the collections made by Northcote Thomas and now in the University of Cambridge Museum of Archaeology and Anthropology), and the spectacle of Africans themselves in a variety of large-scale national and regional exhibitions. The popular illustrated press and serialized encyclopaedias such as Peoples of All Nations were also part  of this dissemination, and, as mentioned above, this material was later republished in works such as The Secret Museum of Mankind.

I recognized the photographs when I obtained a second-hand copy of The Secret Museum of Mankind in the early 1970s, having earlier seen copies of some of Northcote Thomas’s photographs. These had been made from the album lodged in the National Museum in Lagos and provided by a colleague, since at that time I was considering whether to make an art historical field study in the Edo North area (known in Thomas’s time as Kukuruku). I spent some time in the UK at the Cambridge Museum of Archaeology and Anthropology, where I was given access to Thomas’s collection – although it was not well catalogued, stored or described at that time. I pursued a field enquiry in Edo North between 1971 and 1974, witnessing the festival described by Thomas as Eliminya in Otuo (Otwa) in 1973. (When I visited the festival was called Igugu.) Although this was not my primary research, after witnessing this extraordinary masquerade spectacle I did some follow up work and wrote an article on Otuo’s age grade masquerades, published in African Arts (Borgatti 1982). 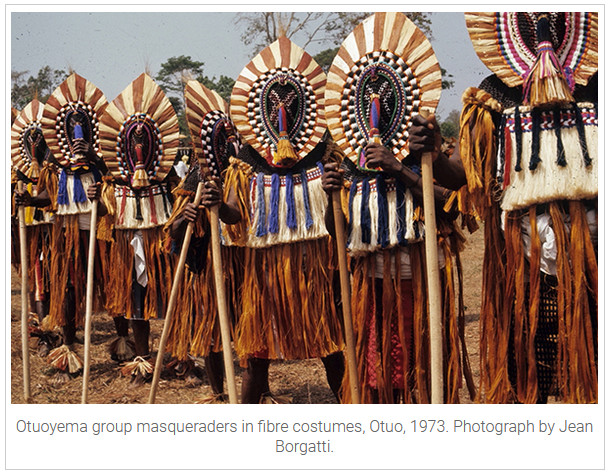 I had been fortunate in 1973 to document a particularly important group of men who served as sponsors for the masquerades as they moved into what was described as the lower levels of leadership. They were men between 40 and 50 years of age in the Otuoyema age group. Otuo requires that its citizens participate in the age-grade system, even if that participation is by proxy, moving up systematically through the ranks. If a man does not participate, he may never become a chief in Otuo – no matter how successful he has been in the outside world. This seems to have provided considerable incentive for people to support the age-grade institution. 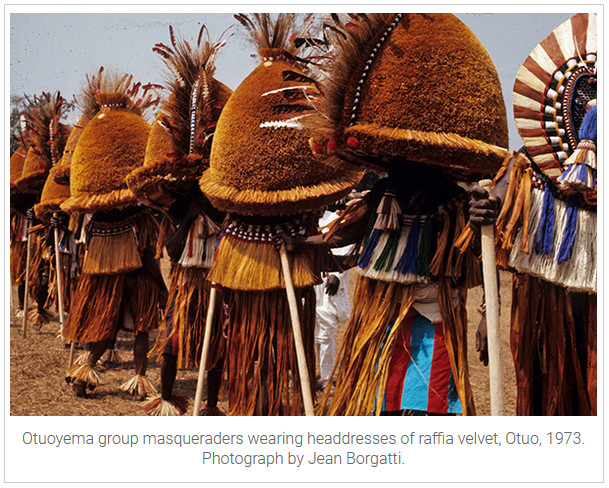 I returned to Nigeria in 2002-03 on a Fulbright-Hays Research and Teaching fellowship that enabled me to follow up on the Otuo (and neigbouring Ikao) festival. During the festival, I was the guest of the paramount chief of Otuo, Ovie Julius Elugbe, who had been one of the initiates in 1973. 2003 was a year during which age sets moved up, so new masquerades had to be made and the displays were elaborate, though not as elaborate as in 1973. 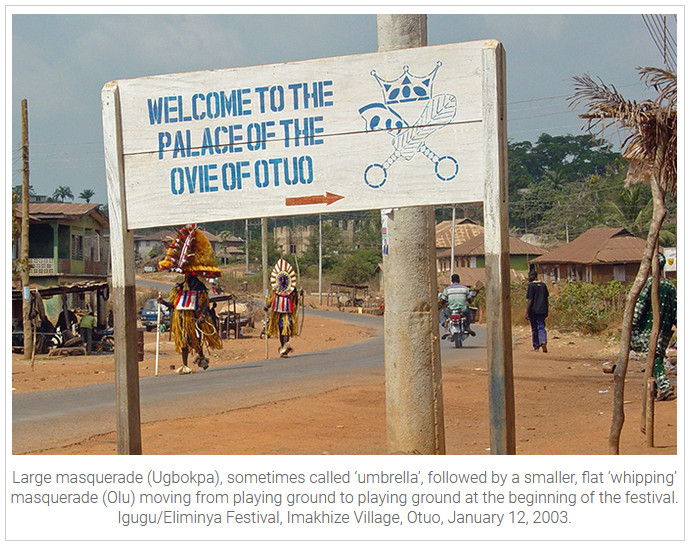 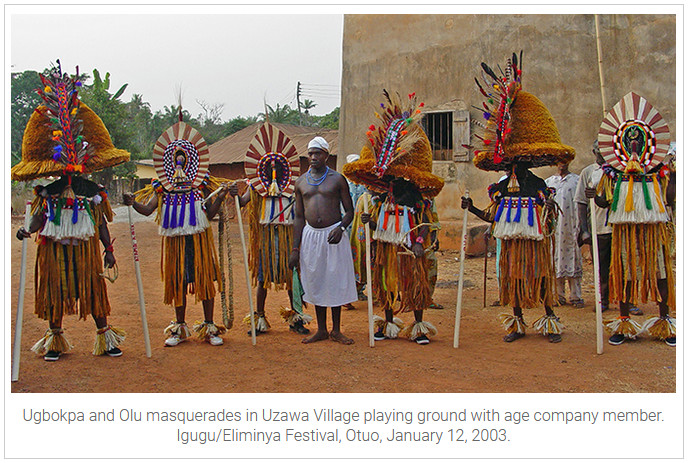 Subsequently, in 2016, I photographed the festival again, this time in the company of the linguist, Professor Ben Elugbe, the late Ovie’s nephew. 2016 was not a year for age-grade formation, since this occurs only once every five years when the new masquerades are introduced (in contrast to Thomas’s assertion that it occurred every three years). In between times, the fibre masquerades, if not those with carved wooden headdresses, come out annually in their respective quarters, going to each village square or playing ground to dance. According to Professor Elugbe, there are eighteen distinct playing grounds today. If no one is there to beat the drums for the masquerades when the arrive, they may just walk around and go on to the next playing ground. 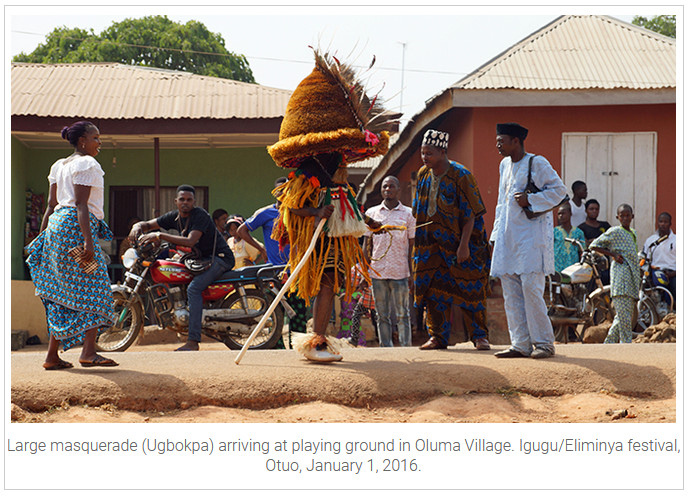 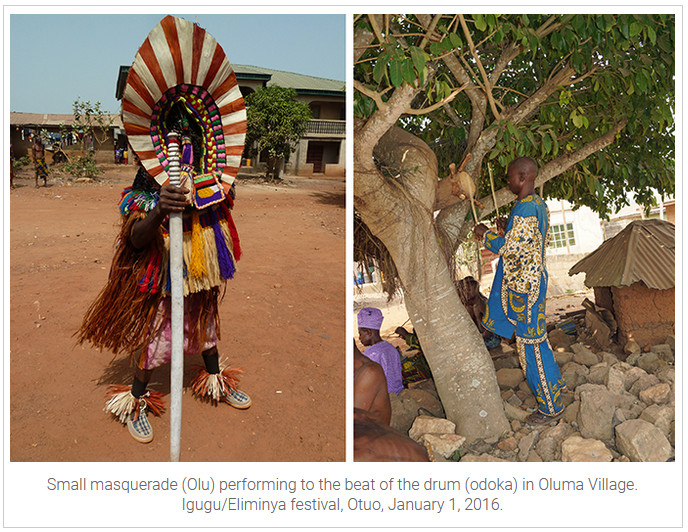 Even though Thomas’s photographs provide an important visual baseline for Otuo’s cultural practices, much work remains to be done in these northern Edo communities that are struggling to conserve their remarkable heritage.