At least two groups of people in Africa are described as the Yombe people. They reside primarily in Zambia, Republic of the Congo, the Democratic Republic of the Congo and Angola. Adept at crafts and art, the men are involved in weaving, carving, and smelting, and the women make clay pots. Popular figures include the Nkisi nkonde and female phemba statues.

In 1981 there was an estimated 15,000 people of the Yombe, living in an area of 625 square miles (1,620 km2). This group refers to people among the tumbuka of Zambia. Yombe is one of the six foreign groups who invaded Tumbuka people after 1760. Another group, also referred to as the Yombe people, live in the south-western part of the Republic of the Congo, with others living in the Democratic Republic of the Congo and Angola. This group refers to people among the Kongo.

Yombe history indicates a southward migration of the Mbenza clan from present day Gabon sometime before the 15th century. Oral and written accounts connect them with the historical Mayomba Kingdom, which flourished in the 16th century. During the 16th and 17th centuries migrations of Manyanga and then Bwende peoples arrived in the area. Both groups eventually assimilated into Yombe communities. The Kongo and Solongo expansions at the end of the 17th century forced the Yombe to withdraw from the banks of the Congo River. Although European contact was limited until the end of the 19th century, depictions of Portuguese people in Yombe art reflect 16th century Portuguese styles, indicating a moderate degree of European influence in this region at quite an early date.

The Yombe are primarily involved in agricultural production, growing crops such as plantains, maize, beans, manioc, peanuts, and yams. Though they grow primarily for food supply, they also sell their crops at the market. Goats, pigs and chickens are raised and fishing is practised on the Congo River. Adept at crafts and art, the men are involved in weaving, carving, and smelting, and the women make clay pots.

Due to the thick forests surrounding Yombe territory the land must be cleared through slash and burn techniques before crops can be planted. The land is usually cleared by men, leaving the task of farming to the women. Plantains, manioc, maize, beans, peanuts, and yams are among the primary crops grown. These are primarily used for local consumption, but surplus is also sold in regional markets to obtain cash. Goats, pigs, chickens, and dogs are also raised. Fishing on the Congo River and its surrounding tributaries provides an important source of dietary protein. Men are also responsible for hunting, weaving, carving, smithing, and smelting. Women create clay pots for domestic use.

Primary Yombe social divisions are based on membership in one of nine clans. All clans trace their heritage to Mbaangala who had nine daughters whose names are the same as the clan that each founded. Yombe peoples more readily affiliate with fellow clan members, and each clan has its own set of social and moral rules. Historically the Yombe recognized a supreme chief, but today there are instead localized land chiefs who act as supreme judges and maintain a great deal of religious power. Descent is traced matrilinealy and each clan has a mfumu makanda (supreme leader), who is elected by his fellow clan members based on his wealth and oratory skills.

The artistry of Yombe figurines and statues is well known, usually objects of prestige, kings seated on the throne, or female phemba (maternity) statues. Nkisi nkonde figurines, masks and drums are also made for ceremonies. Their funerary figures are renowned for their realistic depictions.

The supreme deity of the Yombe is Ngoma Bunzi, who hails from an unreachable realm called Yulu. He is contacted via Nzambi a Tsi (earth spirits) and Simbi (river spirits). The Yombe people build shrines as memorials to prominent ancestors, such as village chiefs who has special powers. The Yombe people of northern Zambia believe that people have three different identities: biological, social, and spiritual. Their social standing affects the type of funeral which might be given.

Shrines were also erected to remember important ancestors, and chiefs were accorded sacred powers. The waganga (healers) could be solicited to perform cures, to provide protection from harm, to bring good fortune, or on occasion to avenge harm done by a witch. The medicine of the waganga was closely tied to nkisi bundles. Larger nkisi nkonde figures were used for oath taking on the village level. Nails and similar pointed objects were driven into the figure to seal a pact between two or more individuals. Diviners commonly used hallucinogenic drugs to facilitate their communication with the spirit world.

Some of the most spectacular Yombe pieces are the nkisi nkonde figures described below. They also carve masks and drums to be used in initiation ceremonies. Everyday objects such as combs, staffs, and fly whisks were often carved with figures as a display of wealth and power. 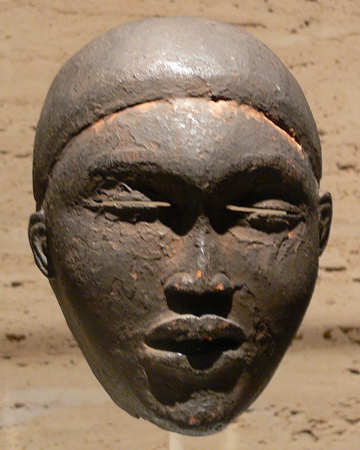