Anthropologists first proposed the Mongo unity as an ethnic group in 1938 particularly by Boelaert, followed by a major corpus on Mongo people in 1944 by Vanderkerken – then the governor of Équateur.

The Mongo people traditionally speak the Mongo language (also called Nkundo) or one of the related languages in the Bantu Mongo family, in the Niger-Congo family of languages. The Lingala language, however, often replaces Mongo in urban centers. This language has about 200 dialects, and these are found clustered regionally as well as based on Mongo sub-ethnic groups such as Bolia, Bokote, Bongandu, Ekonda, Iyaelima, Konda, Mbole, Mpama, Nkutu, Ntomba, Sengele, Songomeno, Dengese and Tetela-Kusu, Bakutu, Boyela and many others.

Mongo tribes are any of several peoples living in the African equatorial forest, south of the main Congo River bend and north of the Kasai and Sankuru rivers in Congo (Kinshasa).

They include such ethnic groups as:

The Mongo traditionally cultivated cassava and bananas but also relied on wild-plant gathering, fishing, and hunting. Their material culture was generally simple, though some hunting and fishing techniques were well developed. Descent was patrilineal, and communities were grouped in lineages stemming from a single ancestor.

Gathering natural resources and foodstuffs was and still is an important subsistence activity. The Mongo harvest a wide range of products from the equatorial forest: wild fruits, vegetables, palm kernels, mushrooms, snails, and edible insects (e.g., caterpillars, termites), as well as roots and vegetation used for beverages, spices, and medicines. Products harvested from the Elaeis oil palm are especially important.

Traditionally, small animals were trapped using ropes with nooses. Larger animals, such as antelopes, boars, and elephants, were tracked and hunted by groups of men with nets, bows and arrows, and long stabbing spears. Small hunting expeditions were mounted year-round by groups of young men, and special celebrations or feasts were often marked by villagewide hunts.

By the nineteenth century, agriculture had become an important part of Mongo subsistence activities. Maize, groundnuts, and beans were introduced to Central Africa by the Portuguese in the sixteenth century, augmenting the established staples of yams, bananas, oil palms, and other crops. Some foodstuffs and medicinal plants, such as sweet bananas, hot peppers, and indigenous greens, were grown in small homesite gardens established near residences. Major crops, such as yams and bananas, were cultivated in larger fields, farther away from the homestead. The Mongo practiced shifting agriculture by rotating fields. After three to five years of cultivation, new fields were cleared, and the old fields were left to be reclaimed by tropical vegetation.

The household, village, and district were the three principal territoral units of Mongo society. The household compound (etuka ) was the primary residence and the main unit of economic production and socialization. The average size of an etuka was generally between twenty and forty members. Each compound was largely autonomous in its internal affairs and was led by a senior elder, who was commonly referred to as "Tata," or "Father." Several compounds in the same area generally formed a village. 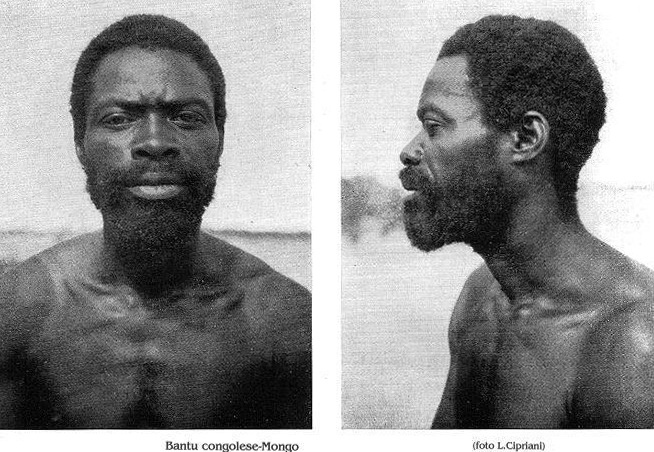 Villages usually ranged in size from 100 to 300 people. As a cohesive unit, the village undertook certain large tasks, such as clearing the forest, and formed a defensive unit against outside attacks. Community affairs were administered by a council of compound elders and the bokulaka (village chief), an elder who had received the council's recognition as group leader. In times of war and instability, dispersed Mongo villages often formed districts, which were essentially territiorial alliances intended to provide for a stronger common defense. In contrast to the situation in the villages, decisions at the district level were made by a loose collection of village chiefs, other prominent male seniors, and medicine men, who were respected for their war magic and divination skills.

The Mongo distinguished gradations in social status in three broad categories: those with authority, those with inferior status, and those with no voice at all in local matters. At the top of village society were the leaders of compounds, who were the dominant "big-men" of the Mongo. They administered the internal affairs of their compounds, delegated tasks and managed food production, acted as arbitrators of disputes, and represented the compounds to the outside world. Within the villages, they formed the councils of elders that governed according to ancestral laws and regulated external relations. These village leaders held special signs of office, consumed the best portions of the hunt, had the most wives, and received respect and deference from the entire community.

There were several categories of people with inferior status in Mongo society. The largest group with low status were the women, who clearly occupied a lower social rung than the men. Although economically incorporated into her husband's family, a wife remained a member of her own family politically, and she had little say in the larger issues concerning the community. Women were given the monotonous task of gathering foods and forest products; men gathered only the items that were considered more prestigious. With few exceptions, women did not possess individual property and could not dispose of the fruits of their labor without the consent of their husbands. They also received harsher penalties than men for social infractions such as adultery.

Refugees, maternal kin, and slaves were other groups with low status in Mongo society. They were all considered inferior to the resident kin group and were dependent upon the reigning big-men. The refugees were groups of people, usually comprising one or two household compounds, who had fled their homes because of war, famine, or epidemics. Groups or individuals sometimes left their own household compounds to find refuge with their maternal kin for personal reasons (such as being denied bride-price or being obliged to leave following serious offenses, such as murder).

Most slaves were captured as a consequence of small-scale warfare. Separated from the protection of their kin, slaves had no rights. They were completely dependent on their patrons—politically, economically, and socially. In most cases, slaves were well treated even though they remained socially inferior. Their loyalty was ensured through controlled assimilation by their masters, who provided the slaves with wives and land. Masters also protected their slaves from the abuse and exploitation of others.

Kinship and seniority were both important in Mongo society. Political authority was based on wealth, but it was legitimized according to genealogical descent. Once established, big-men maintained or increased their power through land allocation, matrimonial exchange, and rights of appropriation, which were all expressed in terms of kinship and seniority. Young men were expected to follow the direction of their elders because they, too, would eventually inherit positions of power and prestige.

Mongo religion placed strong emphasis on ancestor worship and on beliefs in nature spirits responsible for fertility, as well as on magic, sorcery, and witchcraft. Witch-finding cults were prominent, and divination played an important role in them. Mongo art was mainly oral, and their talking-drum literature and songs showed a rich artistic content.

Ideological and moral principles and social reality are mirrored in the culture of the Mongo, particularly in their oral literature, which includes histories, folktales, proverbs, poems, songs, and greetings. Traditional folktales, which were usually centered on a moral or a piece of wisdom, were an essential part of a child's education, and proverbs dealt with all aspects of life, although the ideals of mutual obligation, respect for authority, and the importance of the family were particularly stressed.

The worship of ancestors played a central part in the traditional religion of the Mongo. People believed in a number of different deities and spirits, including a Supreme Being, butthese were approachable only through the intervention of deceased elders and relatives. Prayers for healthy children, success in battle, or safe journeys were therefore addressed to the ancestors. The practice of witchcraft was also a part of Mongo culture. Villagers attributed most types of misfortune—including illness, infertility, bad luck, or extreme poverty—to spells or charms in operation against them. These, in turn, were most often attributed to a competitor's greed, ambition, or hatred. At the same time, significant good fortune or success was perceived to be linked to the possession of beneficial charms and amulets, of which the witch doctor possessed more than anyone else in the village.