The Luluwa, also known as the Bena Lulua or the Lulua, comprise a variety of heterogeneous ethnic groups that live in the southern part of the Democratic Republic of the Congo between the Kasai and Lubudi rivers. 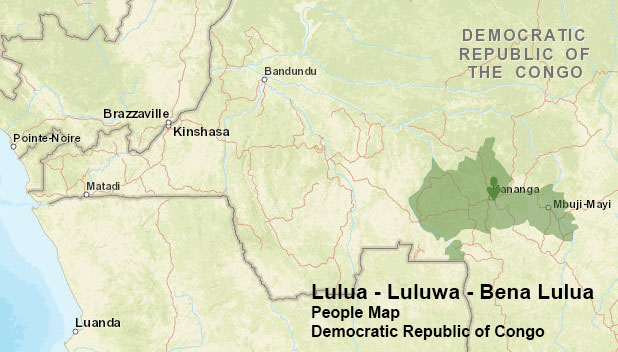 The name Luluwa was given to them by explorers Hermann von Wissmann and Paul Pogge in 1881.

The Lulua are in fact a collection of small groups whose home bordered by the larger Luba state and the related Songye people and Chokwe people, with whom they share a very similar culture, history, and language.

Together with the Konji, Luba-Lubilanji, and Luntu, the Luluwa form what is called the Luba-Kasai cluster. All of these people share a common language, called Ciluba or Chiluba, as well as many cultural, social, political and religious traditions. They recognize Nsanga a Lubangu, a mythical location in Katanga Province, as the place where their ancestors originated.

Lulua lands are bordered on the south by other small ethnic groups, including the Mbagani, Lwalwa, Southern Kete, and the Salampasu. Rural Lulua remain mostly farmers.

Their collective identity was limited to the institution of the "Kalamba", a judge and war leader to whom these small groups turned to in times of internal or external conflict. Nineteenth century European missionaries and travelers contributed to this process of ethnic differentiation from the Luba, defining these small communities in contradistinction to the states of their neighbors. Father A. Van Zandijcke, a Belgian missionary, reported that until 1870 there was no agreed collective name for the Lulua, with each kinship group or chieftaincy identifying themselves independently. By the first decade of the 20th century, the coming of Belgian colonialism along with pressure from the Luba empire and other neighbors, began to develop a Lulua collective identity.

Land disputes with neighbors helped lend a both a collective identity as well as feeding ethnic conflict, as did the Belgian colonial policy of formalising a "kingship", in the style of their neighbors, for the Lulua. The tensions of the late colonial period finally culminated it what has been called the "Lulua--Baluba War", as communal violence exploded on 11 October 1959.

Primarily farmers, Luluwa women grow manioc as a staple crop, as well as beans, sweet potatoes, maize, yams, peanuts, and bananas. The men are responsible for clearing the forest and preparing the soil for cultivation. They also hunt, fish with nets, and trap animals in the surrounding forests. Salt is found in the region and is collected and sold to neighbors to generate income.

At the most basic level, Luluwa society is divided into castes, including nobles, warriors, freemen, foreigners, and domestic slaves. Chiefs are chosen from the noble caste and are responsible for ruling their individual villages. While individual communities are relatively independent, there is a prime minister who oversees a council that is chosen from the heads of various patriclans. They are then responsible for watching over the various community leaders.

The Luluwa recognize both Muloho (a supreme being) and Nvidi Mukulu (a creator). The ancestors, both mythic and recent, are honored at shrines, while nature spirits connected to the surrounding forests are believed to reside in trees and rocks. There are various religious practices that focus on fertility, the protection of children, and ensuring a successful hunt. Hemp is used in many ceremonies and at one time was mandatory for members of certain religious groups.

Because of repeated incursions into their territory by the Luba, the Luluwa experienced several migrations that brought them into contact with other peoples, such as rhea Chokwe, Kuba, Pende, and Songa. Traces of Luluwa interactions with other tribes are idcntitlablc today in artistic and srylisric overlappings with their neighbours. For example, through their contact with Chokwe traders, the Luluwa were introduced to items such as clothing, rifles. and glass beads. It also is known that the Chokwe strongly influenced the Luluwa in their political organization, the architecture of their huts, and their body decoration and wood-carving patterns.

In fact, the Luluwa are famous for the decoration of their bodies and tor their wood-carving patterns. They decorate their bodies with elaborate scarification marks and tattoos and apply the same intricate patterns to masks and sculptures; for example, most sculptures feature complex scarification on the face, neck, abdomen, and limbs.

Together with their Konji, Luba, and Luntu neigh­bors, the Luluwa practice a famous fertility cult known as the Bwanga bwa Cibola. This cult, devoted primarily to the enhancement of women’s fertility and their protection against miscarriage or premature birth, also is practiced for the purpose of having dead ancestors reincarnate themselves in newborn children.

During the late nineteenth and early twentieth centuries, conflict with the Baluba people drove the Luluwa from their homelands. After World War II, however, the Luluwa worked with Belgian colonial authorities to influence their status by entering the colonial self-government political structure in larger numbers. By 1960, Luluwa politicians had gained power in Parliament and rook measures to displace over 100,000 Baluba farmers from what they considered Luluwa land. Their actions spurred what would become known as the Congo Crisis; it would last until 1962 and result in the deaths of some 3,000 to 7,000 people.

Today, the Luluwa are still principally farmers, living in small and autonomous regional chiefdoms. The chief of each village has the primary responsibility of ensuring judicial, social, and political cohesion among the Luluwa. During crises, the chiefdoms come together to appoint a chief who is charged with defending rhe rights of the Luluwa people.

Lulua arts are highly prized in the international collectors market. Lulua carved wood figures are identified with distinctive and extensive portrayal of scarification patterns (despite the fact that Lulua scarification traditions largely died out in the 19th century).

Carved figures serve a number of spiritual and decorative roles and are known for their refined artistry, while Lulua wooden masks are confined to secret society rituals and are made to be disposed after use. 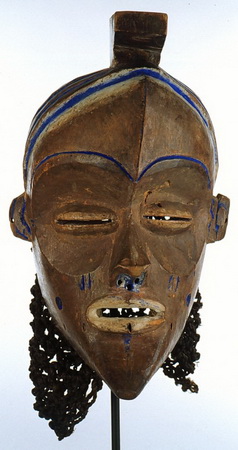