They believe in a God who made the world, in an immortal soul and in retribution for evil; they worship spirits and ghosts, and are under the sway of sorcerers and secret societies, to which even the authority of their chiefs must yield.

Their traditions hold that they arrived from the east or southeast, coming down the Sebe River to the Ogowe, and thence to the Doumé rapids. They made canoes of Aucoumea wood, and sold slaves to the Okandé, receiving European products such as guns and cloth in exchange. The Société du Haut-Ogooué (SHO) established a post at Lastoursville and engaged the Adouma in trade for rubber, ivory, and ebony.

During the 1970s and 1980s, many Adouma moved down the Ogowe, towards Port-Gentil.

They grow crops such as bananas, papayas, guavas, orange, watermelon, mangoes, coconut, cassava, plantain and other crops, wines are made from palm trees , the palm wine with a hallucinogenic root called eboga that is used for healling and during Initiation.

Remarkable are their masks with flat surface for face, domed forehead, an angular nose, an interesting interplay of flat, convex, and angular forms. These masks are mostly polychrome, some with a painted design pattern. For the last half-century these masks have been used for celebratory dances associated with the major social rituals. Their former role is less well documented.

Their masks are mvudi masks of which present one item it has a flattened top of the head dyed black, an arched, flat also have face and slightly triangular nose, rectangular.  The Object has four holes for the masked dancer, two triangular ones next to the nose and two rounds ones, on its forehead the mvudi mask displays a red triangular, outlined in black and the remaining part of the head, the cheeks and the border of the chin display noticeable traces of colour scuffing as a result of protracted use, small breaks to the back rim, as well as with a convincing, partially shiny patina on the front and especially on the back on the inside dates back to the 20th Century. 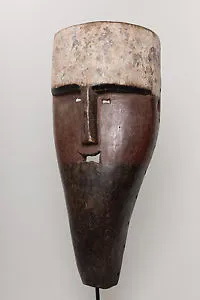 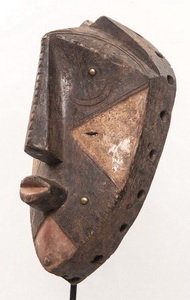