However, as Haberland observes, the imposition of an outside authority and its misrule led to a massive depopulation due to the abuses of the gebbar system, slave-raiding, "famine, disease and a growing sense of hopelessness and resignation, engendered by a total absence of justice. These things not only caused the number of Dizi to shrink (in 1974 there were probably scarcely more than 20,000) but shook their whole culture to its roots."

The 2007 Ethiopian national census reported that 36,380 people (or 0.05% of the population) identified themselves as Dizi, of whom 4,968 were urban inhabitants. The Southern Nations, Nationalities, and People's Region is home to 98.9% of this people. They are the majority of the inhabitants of the Maji woreda, and have notable minorities in the neighboring Meinit and Surma woredas.

The Dizi are highland cultivators and Omotic-speaking people residing in southwestern Ethiopia, west of the Omo Valley River. The town of Maji, which is near the center of the Dizi area, is about 100 kilometers (62 miles) directly south of the town of Mizan Teferi. Driving from Mizan Teferi to Maji on the road through Dima is about a 170 kilometer (106 mile) journey.

The Dizi's closest neighbors are the Me'en people to the north, and those who have often been called the Surma, to the south and west. Their languages are both part of the Surmic branch of Nilo-Saharan, unlike Dizin, which is Omotic.

Before their forced incorporation into the Ethiopian Empire in the 1890s, based on their own statements and the evidence of numerous abandoned terraced hillsides, the Dizi are estimated to have numbered between 50,000 and 100,000. However, as Haberland observes, the imposition of an outside authority and its misrule led to a massive depopulation due to the abuses of the gebbar system, slave-raiding, "famine, disease and a growing sense of hopelessness and resignation, engendered by a total absence of justice. These things not only caused the number of Dizi to shrink (in 1974 there were probably scarcely more than 20,000) but shook their whole culture to its roots. 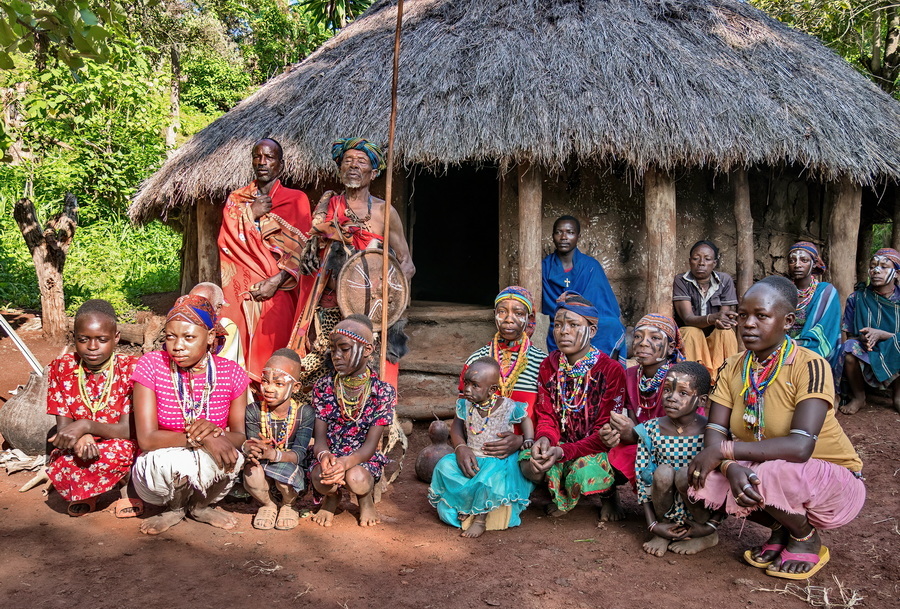 "Once upon a time,heaven (= God, both described as saagu) and earth were closer to each other than now. People were living happily together, and there was no death on earth.However, when the Amhara came, people started to deceive, steal, and hurt each other even within the same community.

Heaven and earth became separated far apart, and from then, people started to die." his myth was not known by all, and did not necessarily describe the Amhara as the cause of the separation of heaven and earth or the origin of death.

Dizin is a member of the Omotic language family, which has generally been considered a member of the Afrasian (Afro-Asiatic) language family. Omotic was known as Western Cushitic until Fleming and Bender argued for a separate language family in the late 1960s and early 1970s (Hayward 1990:vii-viii). The internal classifications of the Omotic languages are still unsettled questions. Even the inclusion of Omotic in Afrasian is a matter of some debate. Bender has even speculated "about the possibility that part of Omotic is indeed Afrasian but that perhaps Aroid and Dizoid (AD) are not" (2003:xii). It will be interesting to see where the evidence leads in the coming years.

The Dizoid languages besides Dizin are Sheko and Nayi. Aklilu Yilma (2003:59) uses "Maji" instead of "Dizoid" because both Sheko and Nayi speakers say that their ancestors moved to their present locations from the Maji area. Others have also used the term "Maji languages" (Bender 1975:46, 48 and Hayward 1990:xi.), as will be done in this thesis. Dizin's next closest linguistic relatives, according to Bender, are the Aroid languages: Ari, Hamer, and Dimé. Some of the languages from the TN side of the TNDA group are Welaitta, Basketo, Malé, Kooreté, Benchnon (Gimira), Yem (Janjero), Kaficho, and Shekacho (Mocha) (2003:1-7).

Dizi people are one of the indigenous tribes in Ethiopia. They have always occupied that land and did not come from anywhere. The oral tradition of the Dizi people rather suggests a connection to the Tigre people of  Northern Ethiopia. Harold Kurtz (2005, personal communication), who lived near Maji for  many years, says that the oral tradition is that Orthodox Christian missionaries from Tigre  came to the Dizi area several hundred years ago. They taught and preached for a few years, and when they left, they gave three things to the Maji Chief and the Adikas Chief that those chiefs considered sacred: a blue cloth, a block of wood, and a fly switch. These artifacts are still being kept in those chiefs' compounds in small, carefully maintained buildings.

Kurtz (2005, personal communication) also says that "[the Dizi] were a very, very class structured society even to the point that you needed to know by relationship exactly how far up the hand—what knuckle—you took hold of when you shook hands with another man."

The traditional leaders such as burji, kiam, and kiaz, maintained order before the current structures of the Ethiopian government came to the area. Subsistence farming was (and continues to be) the most common livelihood for the Dizi. Metal workers were likely invited from outside the area by the Dizi leaders to refine iron ore and make tools of high tensile steel (Kurtz 2005, personal communication) Maji has been a southwestern outpost of every central government of Abyssinia or Ethiopia since the days of the Emperor Menelik in the 1890s (Deguchi 1996:122). Mule trains moved goods from Maji to Jimma to Addis Ababa, as well as the reverse direction.

When viewing the mountainous Dizi territory today, a striking feature is numerous terraces. These were built in the days when the Dizi population was great enough that the scarcity of farmland necessitated a creative solution. Because a decreased population over the past 100 years or so has no longer required increased farmland, the Dizi have lost the art of building these terraces. Disease is a possible reason for the currently reduced numbers, but another factor is the slave trade that took many Dizi people from this area to other places.

This was still continuing on a large scale in the early Twentieth Century, as was reported by Major Henry Darley, a British explorer who traveled to Maji and wrote Slaves and Ivory: A Record of Adventure and Exploration among the Abyssinian Slave-Raiders (1926). Fernyhough reports, "Contemporary Ethiopian and European estimates suggest that for Kaffa, Gemira and Maji the demographic impact of slaving involved the deaths or deportation of at least 300,000 people between the early 1900s and the mid-1920s" (1994:696). Fernyhough's data suggest that those estimates are probably high (1994:696), but he does agree that there is evidence for significant numbers of slaves being taken from the southwest of Ethiopia, including the Maji area, as late as the 1920s (1994:692-8).

Relations between the Dizi people and the Tirmaga-Chai people have been complex. For example, a number of Tirmaga-Chai men have married Dizi wives, but I am not aware of any cases of Dizi men marrying Tirmaga-Chai wives. Market forces are certainly one factor, since the bride price for a Dizi bride (around five cows) is only one-fourth the price required for a Tirmaga-Chai wife.

The Dizi 36,380 people (or 0.05% of the population) are highland cultivators in the well-watered region around the town of Maji (altitude about 2800 m). As subsistence farmers they grow, corn, barley, teff, and other crops. They raise cattle, sheep and chickens, and they also are beekeepers for the honey.

Naali is the ritual, regardless of the hierarchy or the category, to affirm friendship between people of the same sex, and to become close friends. When two people start to like each other and decide to become Naali, the ritual is conducted in the house of one of them. During this ritual they tap each other's shoulders (diyeem) with goat hide four times; first right, then left (repeated twice). First the person of the house starts tapping the other's shoulder, then vice versa. They must call each other's name when'tapping the shoulders.

When this is finished, the persons concerned are not allowed to speak to each other until a second ritual in the other person's house is completed. They communicate with each other through a third person. After.three months to one year, the second ritual will be conducted in the other person's house. At this time, many local people gather around with some local liquor in their hands. New kofu are prepared. There are broken into two and the two persons who are becoming naali' separately drink liquor with the fragments. The fragments of the broken kofu would then belong to each of them.
Then, as was done before, they tap each other's shoulders several times with the goat hide. The one who conducted the first ritual presents the other with a cow. The one who is given the cow has to raise it for about three years and breed at least one calf. This will be given to his partner. Such is the outline of the ceremony.

After the naali courtesy is completed, the two people concerned become quasi-relatives. Therefore, the descendants of naali are not allowed to marry each other. This is because they,are recognized as naali as well. This ritual is possible even between persons of different ranks. Therefore, a kaaltyab man and a geima man can become as close as relatives as a result. This sort of relationship must be something that contravenes the "caste" system. This ritual is completely approved in Sai, although in fact, it does not take place too often.
It may be objected that this ritual represents a kind of so called "communitus" and therefore.does not contravene the caste structure. Nonetheless, it should be recognized that Dizi society is not composed of a monolithic rank system.

Dizi people are very religious and religion forms part of their culture. In their cosmology, they worship a Supreme Being or Creator God, Saagu. Saagu is the god that created all thing in Dizi world and the god above all other gods and divinities. Dizi elders pour libation and offer prayers to Saagu in times of needs to come to their rescue.

The Kumu. The Kumu is said to be "the mother of the people (yabkoi)": he was the first human being to obtain fire. Holding the fire in his hand, which he started by rubbing pieces of wood together, he moved from Gemo-Gofa near the Omo River to a land called Kwomo in Mui. The Kumu 's descendants now live in Mui. The person who takes up the title of the Kumu is a male. However, the Kumu is not the chief of Mui. The chief of Mui is the Muikzyam, while kumu remains in the rank of burzya.

An oral tradition as follows: When Saiktyasu came from the land of the Shako to Sai, Sai was already the territory of the Kumu. After the Saiktyasu conquered this land, the Saiktyasu became the follower of the Kumu. The chiefs other than the Saiktyasu, under the Kumu, were the Daagburzi, the Wloruburai, the Muikyam (Muigay'u), the Gobittyaar, and the Mojikurit (Adikas, Kworu, and Chiski are not the ceremonial territory of the Kumu). The ranking of the Kumu is buru2a, but is higher in rank than the Saiktyasu, and there is nobody else who is higher. The founders of some baabaishi in Sai are said'to be the children ofthe Kumu. When a baabdishi or koichiezi dies, the Kumu comes' to Sai and conducts the ritual. A cow is killed then, and given to the Kumu.