The Chokwe people, known by many other names (including Kioko, Bajokwe, Chibokwe, Kibokwe, Ciokwe, Cokwe or Badjok), are an ethnic group of Central and Southern Africa. They are found primarily in Angola, southwestern parts of the Democratic Republic of the Congo (Kinshasa to Lualaba), and northwestern parts of Zambia. 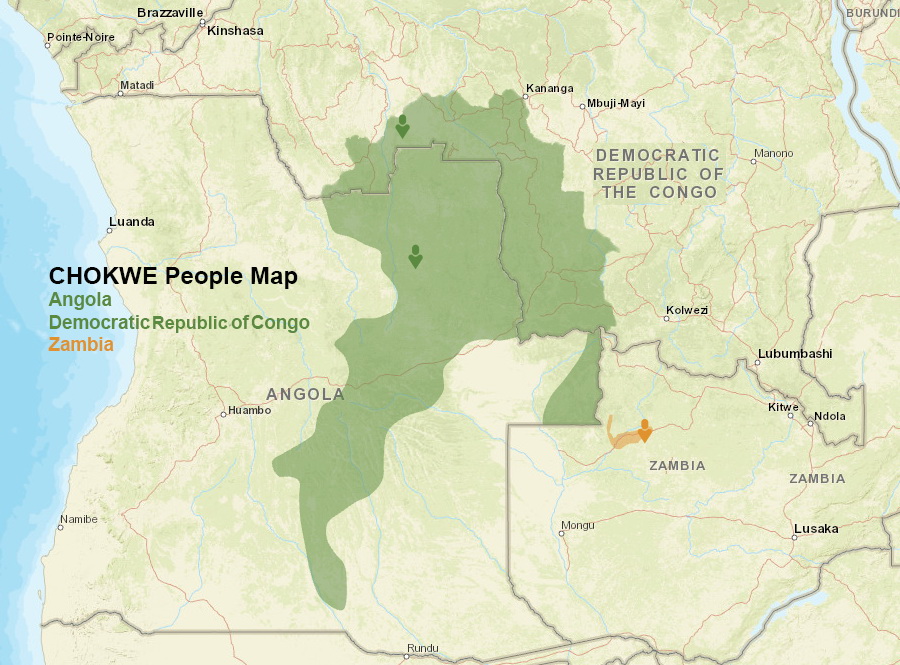 Estimated to be about 1.3 million, their language is usually referred to as Chokwe (or Kichokwe, Tshokwe), a Bantu language in the Benue-Congo branch of Niger-Congo family of languages.

Many also speak the official languages of their countries: English in Zambia, French in Democratic Republic of Congo, and Portuguese (as first or second language) in Angola.

460.000 Chokwe live in woodland savanna, but are also found along rivers and marshland with strips of rainforest.

The Chokwe do not recognize a paramount leader, but instead offer allegiance to local chiefs who inherit their positions from the maternal uncle. Mwana nganga (chiefs) consult with a committee of elders and ritual specialists before making decisions. Villages are divided into manageable sections which are governed by family headmen. All members of Chokwe society are divided into two categories: those who are descended from the founding matrilineal lines and those who are descended from former enslaved populations.

The Chokwe grow manioc, cassava, yams, and peanuts. Tobacco and hemp are also grown for snuff, and maize is grown for beer. Domesticated livestock is also kep, and includes sheep, goats, pigs, and chickens. Protein is added through hunting.

There is an exclusive association of big game hunters known as Yanga, but everyone contributes to the capture of small game animals. The farming and processing of agricultural products is done almost exclusively by women among the Chokwe. Slash and burn techniques and crop rotation are practiced to conserve the land naturally.

Chokwe Male Initiation in Angola, Zambia, and the Democratic Republic of Congo

The Chokwe are one of a number of peoples that once formed part of the Lunda Empire, and, like many of their neighbors, they practice male youth initiation that incorporates masquerade performances. Male initiation requires that boys, whose orientation has been strictly towards their mothers and family members, be snatched from their familiar environs and taken to the bush, a fearful place they have always been warned against. This is not usually an annual event; the initiation process (mukanda) depends on the local demographics, economic circumstances, and the decisions of elders. When the catchment of boys of the appropriate age (about 8-15 years old) from neighboring villages is deemed adequate, male society members will prepare the initiation camp. The removal of the initiates is not immediate; their families will recognize the advance signals, although the children will not. Masquerades enter the villages and perform, then leave. Some time later, certain masqueraders will return and carry the boys away to their symbolic “death”.

In addition, they learn complex dances, a secret pictograph system, and other esoteric knowledge. They are subject to absolute discipline. They do not leave the camp, which is regarded as a living being whose body is its wooden retaining wall, with “eyes” made of shaped vegetation that project upwards, and “ribs” made from additional projections. The circular enclosure’s one entrance is closed off at night, and the boys are circumscribed by multiple rules, including a single place for urination. The masqueraders go back and forth to the village to collect food for the boys from their mothers, an act that not only provides sustenance but reassures the women that their sons are alive and well.

A designated circle within the camp is the area where the masquerades are made and kept. The netted costumes are crocheted from bush fibers, and the masks themselves are made by stretching barkcloth (felted by beating the bark of a particular tree) over a reed framework, sealing it with resin, then painting it, typically in black, red, and white. Some of the masks are extremely large, but the materials keep them lightweight. Because these masks are not carved, however, their facial features are not crisp, nor can they always attain complete symmetry.

When training is complete, the initiates are reintroduced to their communities. They enter in initial silence, escorted by the masqueraders, dressed in uniform style with hats and decorative patterns on their faces, arms, and torsos (Fig. 303). They sit in state, bowls in front of them to collect appreciation money from well-wishers. They later dance and interact with the townspeople, accepted as those who have put childhood behind and are now oriented to adulthood and the world of men. They will no longer sleep in their mothers’ houses.

After the initiation season has concluded, senior men set the camp alight, burning it and the barkcloth masks; wooden examples, if in use, are taken away and stored until the next initiation. 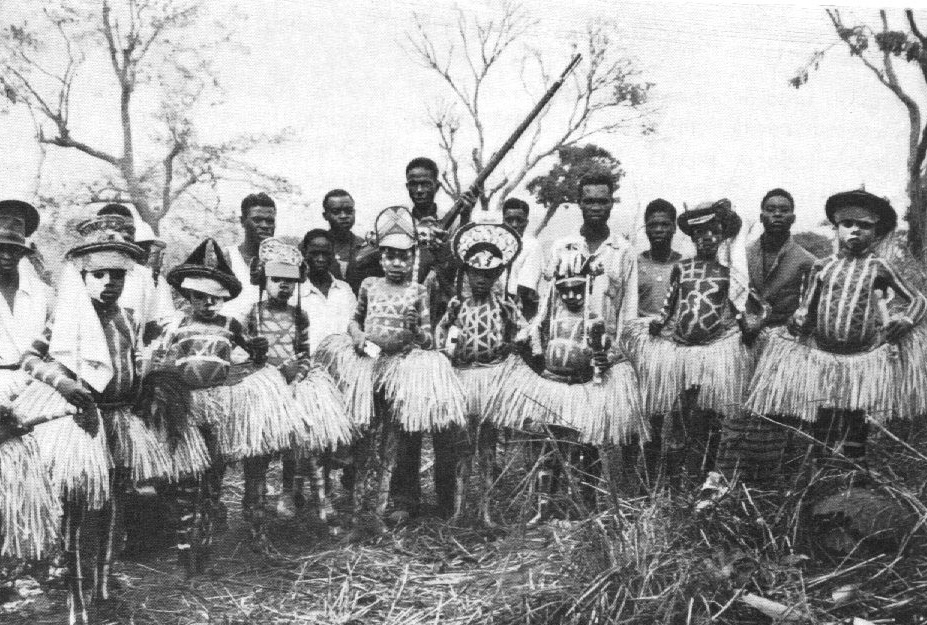 Fig. 303. A group of Chokwe initiates preparing to leave their camp and be welcomed back into society. Photo courtesy DIAMANG, Angola. Creative Commons CC BY-NC-ND 2.5 PT.

When commenting on artefacts and its links to wider Chokwe society, Anthropologist Daniel J. Crowley commented “their sanguine approach to life is evidence by their attitudes towards the arts, which traditionally were incorporated into every major aspect of Chokwe culture”. From Sculptures to household items including hairs combs, chairs as well as pottery and baskets, all played a part in representing Chokwe cosmology. Most items depicted some part of ancestry, through this close association to spiritual ancestry this was thought to invoke success as well as continuity. These items show how God was visually present in many features of everyday life, all of which nurtured a sense of alignment and balance.

There were many moments in an individual’s life that provided space to engage with God. One example of this can be seen in Mukanda (the ceremonies initiating Chokwe boys into adulthood), this involved boys entering a secluded space away from the village to reflect on their childhood and life thus far and prepare for a rebirth into adulthood. Special walking sticks, depicting Chokwe ancestry, were given to boys as they ventured back to their community, now as men to symbolise the continuity of life. The Mukanda also features the strong presence of Pwo (masks depicting female ancestral spirits) to pay homage to womanhood and the female essence. In his essay Revisiting Pwo, Manuel Jordán describes the mask as sharing “the positive influences of the ancestral spirits with the community”. The Mukanda offers an example of the high regard placed on connecting to spirituality in the process of transition and growth.

The examples indicated point to the strong spiritual connections that shaped many features of Chokwe society. For the Chokwe, having God present in all aspects of life ensured continuous dialogue and engagement with spirituality. A lot can be learned from this approach in the process of knowing ourselves better. Exploring our spirituality provides an opportunity to connect with our core and be guided by it in all our endeavours. The clarity we get from understanding our purpose and nurturing our faith and efforts into realising this purpose is an empowering feeling, may we all create the space to achieve this.

The Chokwe are well known for art objects produced to celebrate and validate the royal court. These objects include ornately carved stools and chairs used as thrones. Most of the sculptures are portraits, which represent the royal lineage. Staffs, scepters, and spears are among other implements sculpted to celebrate the court. 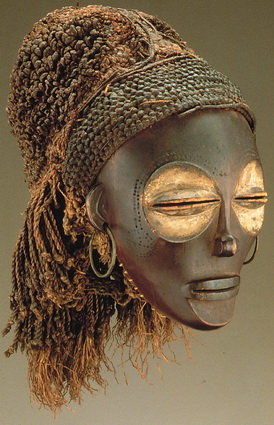 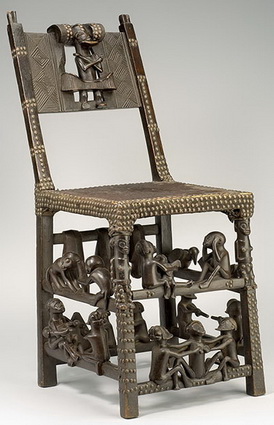 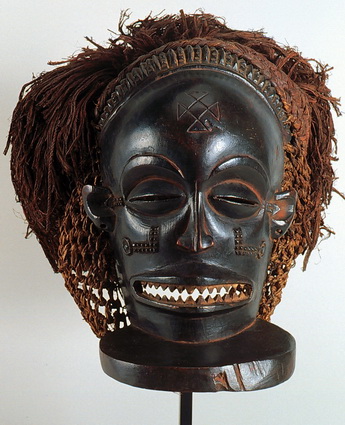