Everyone participated in discussions, including slaves. It was an egalitarian society. The Baule compact villages are divided into wards, or quarters, and subdivided into family compounds of rectangular dwellings arranged around a courtyard; the compounds are usually aligned on either side of the main village street.

The Baule are agriculturists; yams and maize are the staples, supplemented by fish and game; coffee, cocoa and kola nuts are major cash crops. The importance of the yam is demonstrated in an annual harvest festival in which the first yam is symbolically offered to the ancestors, whose worship is a prominent aspect of Baule religion. Ancestors are the object of worship but are not depicted.

The foundation of Baule social and political institutions is the matrilineal lineage; each lineage has ceremonial stools that embody ancestral spirits. Paternal descent is recognized, however, and certain spiritual and personal qualities are believed to be inherited through it.

Legend goes that in the 17th century the Baoulé left present day Ghana and traveled west into present day Côte d'Ivoire under the lead of the Queen Pokou. According to oral tradition, the Baoulé were forced to leave Ghana when the Ashanti rose to power. While they were fleeing for their lives they came to the Komoe river which they were unable to cross. With their enemies chasing them they began to throw their most prized possessions into the river. It came to the Queen's attention that their most valuable possession was her son. The Queen realized that she had to sacrifice her son to the river and threw him in. Upon doing so hippopotami rose from the river and allowed them to cross, saving their lives. After crossing, the Queen was so upset about losing her son that all she could say was "baouli," meaning: the child is dead. From that point on they were known as the Baoulé.

One of the favourite pastimes is the game “Atté,”. An odd number of nuts are placed in a circular pattern in the centre of two opposing teams. The two teams, roughly 30 metres apart, take turns throwing nuts at the circle of nuts. Once a nut has been hit, it is eliminated, and the team that hit the respective nut gains a point. The game ends when all the nuts have been eliminated, and the team with the most nuts at the end of the game wins.

The Baule believe in an intangible and inaccessible creator god, Nyamien. Asie, the god of the earth, controls humans and animals. The spirits, or amuen, are endowed with supernatural powers. Religion is founded upon the idea of the immortality of the soul.

Ivorian children begin aiding their parents with the everyday chores of life at very young ages. As soon as they are old enough, they either carry water from the village pumps or heavy loads of food and firewood to the village market. The boys, when old enough, may even help their father with clearing vegetation.

Like several other groups with Akan origin, Baoulé children are often named according to the day of the week or the circumstances under which they were born. For example, a male born on a Monday would be named Kouassi. However, there are slight variations in the spelling and pronunciation specific to the Baoulé. The Baoulé have a calendar that is different from the calendar of other Akan ethnic groups. This may be due to the circumstances of their departure from Ghana and the need for them to mark a separation with the Ashanti Kingdom. For ethnic groups such as the Ashanti, Abron, N'zima, Koffi may be a name for a boy child born on Friday. For the Baoulé, Koffi and Affoué are names for Saturday, the day being Foué. There is, therefore, a sound common to the day and the names.

With regard to the Ivorian economy, coffee and cocoa are referred to as the chief cash crop. Up until the present day conflict, the Côte d'Ivoire was the world's largest exporter of cocoa. With respect to the local Ivorian economy, resources such as firewood and yams are transported to local markets and sold to other Ivorians or even foreigners. Within the local marketplace, one can find a wide array of goods, including tailored clothing, boiled eggs, popcorn and lingerie.

Baule art is sophisticated and stylistically diverse. Non-inherited, the sculptor’s profession is the result of a personal choice. The Baule have types of sculpture that none of the other Akan peoples possess. Wooden sculptures and masks allow a closer contact with the supernatural world. Baule statues are usually standing on a base with legs slightly bent, with their hands resting on their abdomen in a gesture of peace, and their elongated necks supporting a face with typically raised scarification and bulging eyes. The coiffure is always very detailed and is usually divided into plaits. Baule figures answer to two types of devotion: one depicts the “spiritual” spouse who, in order to be appeased, requires the creation of a shrine in the personal hut of the individual. A man will own his spouse, the blolo bian, and a woman her spouse, the blolo bla. The Baule believe that before they were born into the world they existed in a spirit world, where each one had a mate. Sometimes that spirit mate becomes jealous of their earthly mate and causes marital discord. When this happens, a figure depicting the other world spouse is carved and placated with earthly signs of attention.

The Baule are also noted for their fine wooden sculpture, particularly for their ritual figures representing spirits; these are associated with the ancestor cult. The Baule have also created monkey figures gbekre that more or less resemble each other. Endowed with prognathic jaw and sharp teeth and a granular patina resulting from sacrifices, the monkey holds a bowl or a pestle in its paws. Sources differ on its role or function: some say it intervenes in the ritual of divination, others that it is a protection against sorcerers, or a protective divinity of agrarian rites, or a bush spirit. The figures and human masks are elegant -- well polished, with elaborate hairdressings and scarification.
Masks correspond to several types of dances: the gba gba, the bonu amuen, the mblo and the goli. They never represent the ancestors and are always worn by men. The gba gba is used at the funerals of women during the harvest season. It celebrates beauty and age, hence its refined features. The double mask represents the marriage of the sun and the moon or twins, whose birth is always a good sign. The bonu amuen protects the village from external threats; it obliges the woman to a certain discipline; and it appears at the commemorations of death of notables. When they intervene in the life of the community, they take the shape of a wooden helmet that represents a buffalo or antelope and which is worn with a raffia costume and metal ankle bracelets; the muzzle has teeth, which incarnate the fierce animal that is to defend the group.

Mblo is the name of a performance category that uses face masks in skits and solo dances.  Mblo masks, used in entertainment dances are one of the oldest of Baule art forms. These refined human face masks are usually portraits of particular known individuals. Mblo masks embody the core Baule sculpture style manifested in figures and decorated objects – spoons, combs, pulleys and the like. Lustrous curving surfaces, suggesting clean, healthy, well-fed skin, are set off by delicately textured zones representing coiffures, scarifications, and other ornaments. The idealized faces are introspective, with the high foreheads and the large downcast eyes. Ornaments above the face – birds, combs, horns, faces, and other decorative motifs – are chosen for their beauty, and have no iconographic significance. Fine scarifications and coiffures denote personal beauty, refinement and a desire to give pleasure to others.

Goli is the day-long spectacle that normally involves the whole village and includes the appearance of four pairs of masks, music played on special instruments, and, ideally, the jojoyous consumption of a great deal of palm wine. Goli can be performed both as an entertainment and for the funeral of important men. The very characteristic, round-shaped “lunar” goli is surmounted by two horns. It was borrowed from the Wan for a celebration adopted by the Baule after 1900. Celebrating peace and joy, they would sing, dance, and drink palm wine. In the procession, the goli preceded the four groups of dancers, representing young adolescents. The goli would be used on the occasion of the new harvest, the visit of dignitaries, or at the funerals of notables. Boxes for the mouse oracle (in which sticks are disturbed by a live mouse, to give the augury) are unique to the Baule, whose carvers also produce heddle pulleys, combs, hairpins, and gong mallets. 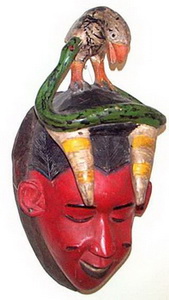 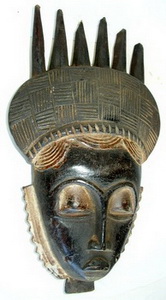 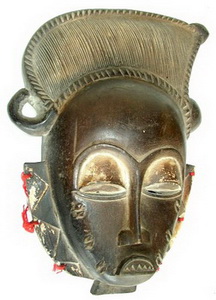 The Bonu Amuen is a dance to protect the village from threats and it appears at the commemorations of death of notables. The Baoulé wore a wooden helmet that stands for a buffalo. Then they wore suits with raffia and metal bracelets for the ankles. The snout of the costume has teeth, which they believe a strong animal would defend them.

The staple food of the Ivorian diet is the yam. The yam is boiled, and, when cooled, pummeled into a mush to be eaten. Cassava is also an integral part of the Baoulé cuisine. Yams, in addition to corn, are stored until they are needed. Foods other than yams are obtained from the local market. The most important food of the market is fish, which is wrapped in palm leaves, an economically efficient alternative to wrapping paper. Ivorians typically receive their meat from goats, sheep and chickens, which happen to be shared by the entire community. They receive their milk from their goats and their eggs from their chickens.

The Baoulé political structure is simple; several senior village leaders get together and discuss various issues affecting their village. Each village is ruled by a village-chief (for small villages) or by a queen or a king (for large villages) assisted by some notables or advisers. Queens and kings rarely speak in public, but via a spokesman. Villages were dependent on others to form a canton or a tribe. Each canton is also ruled by a queen or a king. Everyone has a say, even slaves, and everyone was friendly and social. Baoulé political organization is matriarchal and women's rights are very sacred.