Most Yaka men seek work in Kinshasa or other urban centres, and many engage in trade in the greater Congo area. Yaka material culture (carving, basketry, metalwork, and weaving) is well known. Yaka masks and figures have distinctive bulky forms, globular eyes, and turned up noses; some are polychrome, and many have raffia cloth or fringes attached. Yaka style dominates the expressive forms of neighbouring groups.

Young men are expected to pass through various initiation stages, including circumcision. The tribe lives principally from hunting, although subsidiary farming is undertaken by the women.

Approximately 400,000 Yaka presently inhabit wooded steppes and savannah land of the Kwaango región of western Bandundu, an area of south-western Congo bordering Angola. Yaka culture is partly the outcome of a prolonged interplay of Koongo domestic traditions and Luunda feudal political institutions above the village level (Devisch 1988). In rural Yakaland women practice subsistence agriculture, whereas hunting is men's most prized productive activity. In Kinshasa, the Yaka population is estimated at some 300,000. The rich cultural and artistic traditions of the Yaka people are well known, and in particular the healing cults.

Yaka society is organized in segmentary patrilineages (Devisch 1993a: 115 ff.). The individual inherits his or her social attributes, i.e. name, status, and privileges, through his or her agnatic ascendants. Extended families live as corporate groups which are formed according to patrilineal descent and patrilocal residence. A single village may number from one to two hundred adults and children. They are usually divided among three to six extended families, each of which is headed by an eider whose authority derives from seniority.

The northern Yaka recognize uterine descent as well, however. It is believed that physical and innate characteristics, such as health, blood, and inborn capacities (yibutukulu), are passed on to the individual primarily through maternity and the uterine line. These attributes originate from a source of life conventionally associated with the individual's matrilateral great-grandmother. The Yaka in fact express uterine descent relations in terms of an idiom emphasizing the corporeality that characterizes the mother-child relationship. Siblings "coming from the one womb" share privileged bonds of warmth, trust, and mutual help in the household, together with their genitors and dependants. Maternal rela­tions delimit and found relations in the domestic realm as well as in the seclusion phase of the rites of passage. They therefore govern principles of bodily contact, food supply and cooking, commensality, and so on. Uterine relations and co-initiates may thus share their vital force, weakening or strengthening each other, through the exercise of these same bodily activities. Personal skills as well as aptitude for the roles of divination and healing are also believed to be passed down through the uterine line. 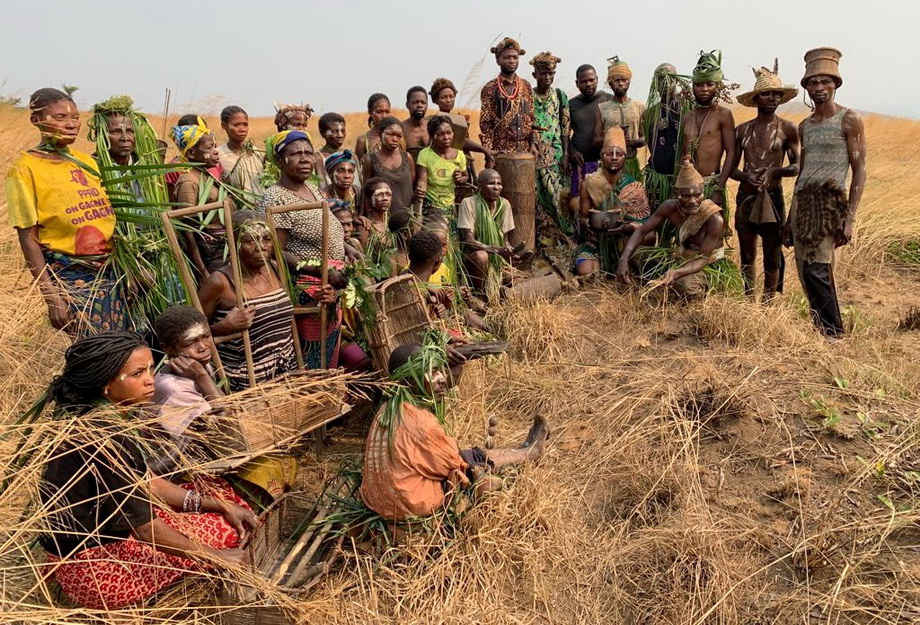 Oral history suggests that the Yaka, along with the Suku, were part of an invasion against the Kongo Kingdom that came from the Lunda Plateau in the 16th century. Previous to that time Yaka culture was enveloped in Kongo language and agriculture. Lunda expansion and creation of the Inbangala Kingdom in 1620 greatly affected the occupants of the Kwango River area, which included both the Yaka and the Suku. At one time the Yaka kingdom was comprised of several smaller ethnic groups, including the Suku. In an effort to expand to the northwest and east, Yaka chiefs weakened their kingdom's strength and were forced to become subservient to the Lunda. The Lunda-Chokwe empire collapsed in the 19th century and the Yaka regained some of their independence.

Their oral tradition states that Lunda arrived in Kwango in the 17th century and found people who were part of the kingdom of Kongo. Yaka was a title of honor given to the warriors of the kingdom of Kongo and this word can be found in the following Kongo sentence from the descendants of M'panzu : " « Beto, mayaka mbata; mayaka mpunza, mayaka mbele. »"(Translation: « We, we catch the blows, arrows and swords. » (that the enemies throw at them)

The colonial Portuguese called them Jagas, and their name may be derived from the Kikongo verb Kuyaka which means "to grab, to take, to hold" referring to the warriors of the kingdom of Kongo and later referring to the invaders. In the 17th century and onwards, the Portuguese used the word Jagas (English: Yakas) to refer to any rootless and vagabond peoples, even if peaceful, in their colonies.

In the 18th century their lands were annexed by the Angola-based Lunda people, but by the 19th century the Yaka had regained their independence. Yaka society is tightly structured and headed by a chief of Lunda origin, the Kiamfu, who delegates responsibilities to ministers and lineage chiefs, Unkwagata.

Among the Yaka, the males contribute to the local economy largely through hunting. They may hunt either individually or in groups and most often use bow and arrow or old rifles. Hunting dogs are a prize possession among the Yaka, and their ability to sniff out game is compared to the mgaanga's ability to sniff out witches. The women contribute most of the food, primarily through cultivation of cassava, sweet potatoes, beans, and peanuts. They further supplement the diet through the gathering of wild fruits and berries and occasional fishing.

The Yaka follow matrilineal descent patterns, which are overlayed with a reckoning of patrilineal ascent, family name, and land ownership. Each community has a local chief who is the direct descendant of the original land owner and usually is controlled to some extent by a paramount regional chief. The Cogngolese government officially governs each region in conjunction with the local chiefs, controlling the extent of the power of those individual chiefs. Ritual specialists and diviners who achieve their prominence through display of their individual healing powers also inform political decisions.

Ndzambyaphuungu (the creator who inhabits the sky) is responsible for life, death, and all unanswerable questions. There are no religious practices that actively pay homage to this god. Instead, religious celebrations focus on honoring the elders and bambuta (ancestors). The death of an elder is cause for a public ceremony performed by other elders. Bambuta may be honored by recognizing and practicing the traditional ways and through offerings and gifts. The offering place is usually a yipheesolu (clearing in the forest). This place is off-limits to outsiders and all women. Offerings may otherwise be made at the grave site of the ancestors. Divination is of prime importance to the Yaka, and the powers of a ngaanga (medicine person) are measured by the ability to discern the cause of illness.

Both mbwoolo sculptures and a type of carved slit drum known as a mukoku are used by ritual specialists. Mukoku help in the divination process, and mbwoolo are used to embody protective medicine. The Yaka also carve numerous masks and headgear for use in initiation and to be worn by traditional leaders. Hair combs and fly whisks often are carved with decorations as well.

Yaka artistic tradition is rich and various, but much of it has been informed by their neighbours —the Suku, the Kongo, the Holo and the Teke. Nevertheless, Yaka statues do have common charac. teristics — an upturned nose and applied pigment

Yaka masks are worn predominantly during initiation ceremonies related to the Ngoni and the Yiwilla societies. There are different types which correspond to different functions: the leader’s mask, known as Mbala, has flared ears and a vegetal-fibre spiked coiffure. The ‘ritual expert’ male and female masks, called Kakungu, have inflated cheeks and enlarged eyes (9), while the initiate’s mask, known as Kholuka, has a face surrounded by a ridge and surmounted by a vegetal-fibre coiffure which supports figures or animals.

The majority of Yaka figures were carved in pairs and were associated with Mbwoolo shrines. Their abdomen are hollow, enabling the insertion of fetish material and they are also adorned with bundles of paraphernalia (io). Yaka figures are multi-functional and sometimes have contradictory roles, for example, they were used to heal and to cause illness.

Prestige objects such as zoomorphic and anthropo-morphic neckrests , cups, adzes, combs and terracotta pipes  were carved specifically for the chiefs and were kept by them. Slit drums ending in a carved human head  were used by diviners. 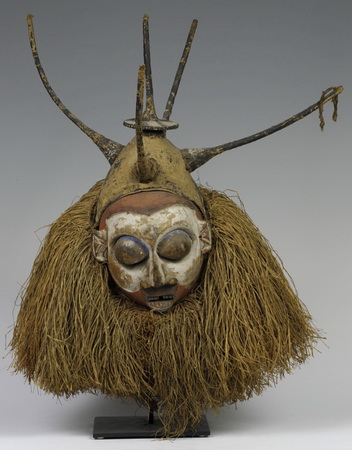 The 80.000 Suku people have lived in the south- western part of the Democratic Republic of Congo since the 16th century.

With the arrival of the Yaka and the Lunda in their territory, they were split into two autonomous groups. Their main economic resource is farming, but occasionally communal hunts are organized. Stylistically, their sculptures are characterized by an enlarged head with an almond-shaped mouth with incised teeth, a triangular nose and coffee-bean eyes, all set under an elaborate coiffure. The Suku carved large figures, which were used during fertility ceremonies, and crouching fetish figures to which paraphernalia were attached.

These were used either as ancestor figures or as the personification of evil spirits. Large face masks and helmet masks surmounted by animal or human figures were worn by dancers during certain initiation ceremonies. The southern Suku produced hairpins, neckrests and adzes with rounded features, unlike the northern Suku whose everyday objects were more angular in appearance —stylistically influenced by the Yaka.