The Winiana people are subgroup of the Gurunsi people in Burkina Faso.

The region southwest of the Mossi Plateau is occupied by a number of autochthonous farmer groups that are referred to collectively by the Mossi, and in most studies, as gurunsi. The singular, gurunga, indicates that the word is of Moré origin (a word of the Moré "-ga, -se" class). The peoples that comprise the so-called gurunsi peoples include the Nuna, Nunuma, Léla, Winiama, Sisala, Kaséna, Nankana, and Kusasé who share similar Gur languages.

The Léla speak Lélé, the Nuna speak Nuni, the Winiama speak Winien, and the Kaséna speak Kasem. Most peoples in the area consider gurunsi a pejorative form of address, and much prefer to be called by their ethnic name. For this reason I have used the name gurunsiin italics and only as a convenient "handle".

Winiama emigrated north from northern Ghana with their Nuna neighbors at the end of the 15th century before the nakomse (Mossi) advance. The Mossi invaders were never able to successfully maintain power in Winiama territory, because the horses on which they depended for military power quickly became sick and died. The bush surrounding Winiama territory is infested with the tsetse fly, making sleeping sickness endemic. Mossi accounts tell of the magical powers of Winiama peoples and their neighbors. Because of the structure of Winiama towns, they were difficult for cavalry raiders to penetrate. Winiama farmers could stand on the roofs of their homes and kill any mounted warriors who dared to enter the narrow alleys between houses. The region, however, was constantly ravaged by slave raids perpetrated by the Mossi, Fulani, and Songhay, until the end of the 19th century.

Winiama are primarily sedentary farmers, growing millet, sorghum, and yams. Maize, rice, peanuts, and beans are grown in addition to these staples. Farmers throughout the region practice slash and burn farming, using keri (fields) for approximately seven or eight years before they are allowed to lie fallow for at least a decade. In the family fields close to the villages, women grow cash crops, including sesame and tobacco, which are sold in local markets. Men participate in hunting during the long dry season. This is important for ritual reasons, since it is during this time that men may interact with the spirits that inhabit the bush. During the dry season, when food supplies are running low, some fishing is practiced in local swamps.

Winiama societies are comprised mainly of farmers without social or political stratification. They are not divided among occupational castes or groups since most of them simply till the land and engage in occasional hunting. Before the arrival of the French, they had no internal system of chiefs and all important decisions were made by a council of elders consisting of the oldest members of each of the village lineages. Religious leaders do maintain some political authority, determining the agricultural cycle and parceling out land for cultivation. The French established local puppet rulers, and the families of some of these maintained nominal political power until the revolution in 1983.

Belief in a supreme creator being is central to Winiama beliefs. A shrine to this god occupies the center of every village. An element of this creator god is Su, the mask spirit, which is enshrined in the oldest and most sacred mask in the community. The spirit of Su can be harnessed to benefit the community or to cause harm to their enemies. When Su is properly appeased communal harmony is achieved. He is responsible for providing women with fertility and is recognized for his role in the continuity of life. Each extended family maintains its own hut, in which the lineage magical objects are kept. The objects allow the family to maintain contact with the vital forces of nature. These objects are inherited by the ancestors and are the communal property of the lineage, providing protection and social cohesion among all members of the family.

The major producers of masks are the Léla, Nunuma, and Winiama in the north, and the Nuna in the south. The Sisala also once used masks, but they have virtually disappeared. The Léla, Nunuma, Winiama and Nuna have influenced the styles, use and meaning of masks among their Bwa and Mossi neighbors. Masks carved of wood represent bush spirits, or spirits that take animal forms. These animal forms may be more naturalistic among the Nunuma and Nuna or more stylized among the Léla and Winiama. The animals that occur most frequently are the antelope, buffalo, bush pig, hornbill, hyena, and the serpent. Some masks represent spirits that have no recognizable animal form. Whatever type is represented, masks have large round eyes surrounded by concentric circles, a short snout for animal masks, or a large, protuberant mouth for supernatural spirits. They are covered with geometric patterns painted red, white, and black, repainted every year, except among the Winiama. Some masks are surmounted by a tall plank.

Masks represent protective spirits that can take animal forms or can appear as strange beings. These spirits watch over a family, clan or community, and, if the rules for their propitiation are followed correctly, provide for the fertility, health, and prosperity of the owners. Thus the masks provide for the continuity of life in the gurunsi world. Almost any unusual event can justify consultations with a diviner and the carving of a mask to represent the spirit that is responsible. When the owner of a mask dies the mask may be passed on to his son, or it may be retired to the lineage spirit house where it slowly decays. Years later a diviner may prescribe a new mask in the same form, and the old mask is taken to the local smith who produces a replacement. Then, such old masks often are sold on the antiquities market. Masks appear at numerous events throughout the dry season. They dance to drive evil forces away from the community. They participate in the funerals of male and female elders. Every three, five, or seven years, the most sacred masks of the community participate, including young men's initiations and every seven years in sacrifices to ensure the well-being of the village. Masks may appear for special reasons throughout the year. Entertainment masks appear on almost every market day to dance for the crowds of visitors. The sacred wankr masks do not appear at such popular, public performances.

The most recognized of the Winiama art forms are magnificent wooden masks. In addition anthropomorphic figures sculpted from clay and wood and various personal objects, ranging from jewelry to wooden stools, are created to honor nature spirits. 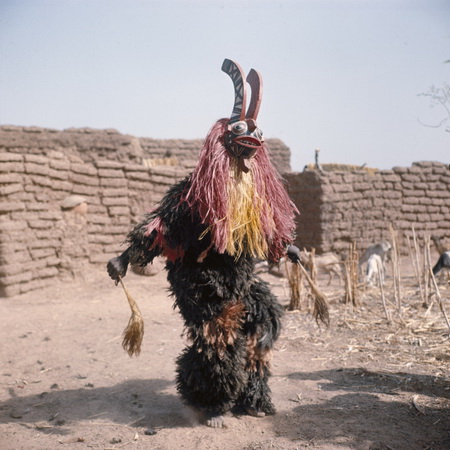 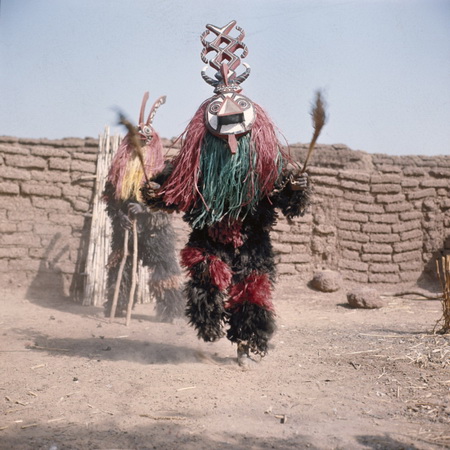