Tabwa, also spelled Taabwa, also called Rungu, a people who live mainly on the southwestern shores of Lake Tanganyika, on the high grassy plateaus of the Marungu massif in extreme southeastern Democratic Republic of Congo. Some also live in northeasternmost Zambia and along the Luapula River. Tabwa speak a Bantu language closely related to those of neighbouring Bemba of Zambia and Luba of Congo.

The Taabwa people are found in the Democratic Republic of Congo and across the border in Zambia, along the western shore of Lake Tanganyika.  The Ethnologue describes their location in DRC as follows:  Katanga Province, on Lake Tanganyika, south of Moba.

In Zambia 26,500 Taabwa are also reported to speak Bemba as a mother tongue, and these are probably counted as Bemba in most sources.

Sources report that the Taabwa migrated across the southern Congo-Zaire border in Zambia in the 1700s.  Many Bantu migrations were going on in Eastern Africa at this time.  Over time in Zambia they intermarried with some of the people groups in the area, primarily Bemba, which affected the form of their speech, leading to the dialect called Shila.

The Taabwa Newtwork reports: Because of their lack of education the Tabwa used to have a minority complex, but this is changing. Other tribes interact quite easily with the Tabwa and neighbour relations are good. Only 15% of the population live in the urban areas.

Traditionally they were hunters and blacksmiths.  Today they live primarily from fishing as well as hunting. They are also involved in agriculture, growing manioc, millet, cassava, beans and maize.

The Taabwa Network reports the following:
Farming is their main source of income and they trade produce with the Haushi and Bemba speaking people. They are a polygamous society and live in groups of 20 people. Shelter consists of little huts made out of mud.

Conflicts are handled by the chiefs or local presidents. An offender either has to pay a fine or suffer a couple of lashes with a hippopotamus tail. The chief of the area normally calls upon the ancestral spirits to bless the land and make the soil fertile.

The Taabwa practice a type of body decoration called scarification.  "On the whole surface of the body, a recurrent motif consists of twinned isosceles triangles, the two bases of which symbolize the duality of life.  They evoke the coming of the new moon, essential to Tabwa philosophy, whose return would be celebrated monthly."  These markings are menat to "embellish the body and recall social values."    -- TRIBAL AFRICAN ART -- TABWA

The Taabwa practice a matrilineal inheritance pattern, which determines the chiefs who lead their fairly autonomous villages.  Autonomy of the villages has diminished in recent times, one of the results of colonial approaches to administration of the various ethnicities under their dominion.

The Taabwa Network reports 1% Islam among the people (source SIL), with 39% Christian adherents, with 60% Traditional Religion.  In their traditional practices, like other African peoples, the Taabwa honor their ancestors.  They carve figurines of them, and have ceremonies of special recognition of the ancestors in the time of the New Moon.  The Moon is ritually symbolized by the triangle.

Tabwa carvers produce many beautiful utilitarian objects such as combs, drums, and bellows, but also produce sculpted figures representing ancestors and twin figures. Although a few masks exist in collections, very little is known about them. 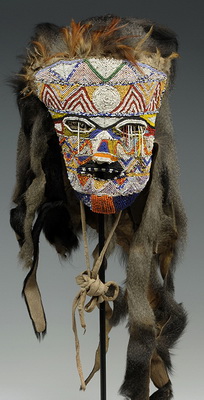 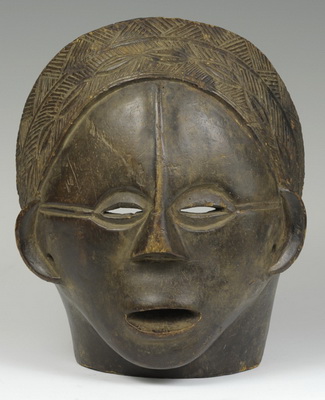