Songo origins are closely tied to their immediate neighbors, and involve decent from the Mbuti and Mbundu who lived in the area prior to the Bantu influx which occurred over the last 2000 years. The Lunda Empire of Mwata Yamwo, which controlled the region through the 17th century, exerted considerable influence over the Songo, instituting Lunda rulers, and demanding economic patronage. The Lunda were eventually overthrown by Chokwe, who live directly to the north of the Songo, and who also attempted to control them. Chokwe power did not last long however, and was soon replaced by European colonialism.

Fishing is the most important economic resources for the Songo. They raise staple crops of manioc, cassava, yams, and peanuts. Tobacco and hemp are also grown for snuff, and maize is grown for beer. Domesticated livestock is also kept, including sheep, pigs, chickens, and goats, which provide meat, but no milk. Meat is obtained through hunting. The farming and processing of agricultural products is done almost exclusively by women among the Songo. Slash and burn techniques and crop rotation are practiced to conserve the land. Regular trade is maintained with neighbors to obtain products from other villages.

The Songo recognize a chief whose position is inherited along matrilineal lines. When male children reach the age of 5 or 6, they are often sent to the house of their mother's brother where they are raised as his sons. Throughout history this geographical region has come under the influence of numerous strong, and sometimes aggressive neighbors including the Kongo, Yaka, Lunda, and Chokwe. The ruling families among the Songo are of Lunda origin, and those who cannot trace their ancestors to the Lunda are considered slaves.

Like their neighbors, the Songo acknowledge ancestral spirits as the center of religious activities. These spirits may belong to the individual, family or the community, and neglecting them is sure to result in personal or collective misfortune. There is a strong belief in sorcery throughout the region, and concordantly those who practice divination, and can uncover sorcerers and other causes of misfortune are highly respected individuals.

The artistic style of the Songo reflects the influence of the Chokwe and the Yaka. Most figures represent the royal family, usually taking the form of portraits, both of the living and the dead. 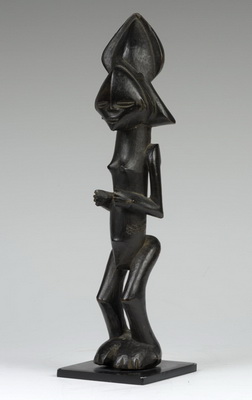 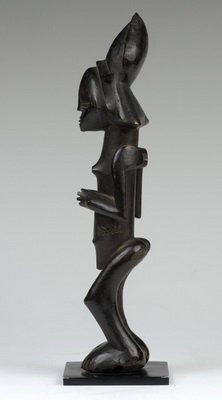