Kishambaa is the Sambaa word for the Shambala language, Wasambaa are the people (Msambaa for a person), and Usambaa or Usambara is used for Sambaa lands. The Shambaa call their lands Shambalai.

They are related to the Bondei and Zigua people, and the Shambala language is mutually intelligible with Bondei and Zigua, with the three groups sharing significant overlap in territory and a long history of intermarriage. The similarity between them has prompted some to refer to themselves as "Boshazi" (the first syllable from each of the three groups).

Sambaa belongs to the North East Coastal Bantu languages. This is a group which includes Swahili; however, Swahili is not mutually intelligible with Sambaa.

The WaSambaa were ruled by the Kilindi dynasty from the mid-18th century to the end of the 19th century. The founder of the dynasty was Mbegha, and his son Bughe established the hilltop capital at Vuga. The kingdom reached its greatest extent under Kimweri ye Nyumbai. After he died in 1862 a civil war broke out over the succession, fueled by competition for the new wealth that the caravan trade in the Pangani valley had brought to the region.

Smallpox and slave trading contributed to the disintegration of the kingdom, and in 1898 a fire destroyed Vuga. The Germans took control. Under colonial rule the dynasty continued to have some authority, but in 1962 the Tanzanian government removed all power from the hereditary chiefdoms. Kimweri ye Nyumbai's descendant Kimweri Mputa Magogo (died 2000) was the last Lion King.

The Usambara area was the early colonial headquarters for German East Africa during the hot season. Tanganyika, the name for the German colony, and later for the republic and eventually for the mainland portion of Tanzania is itself from Sambaa: Tanga means farmed land, and nyika is brushy land. 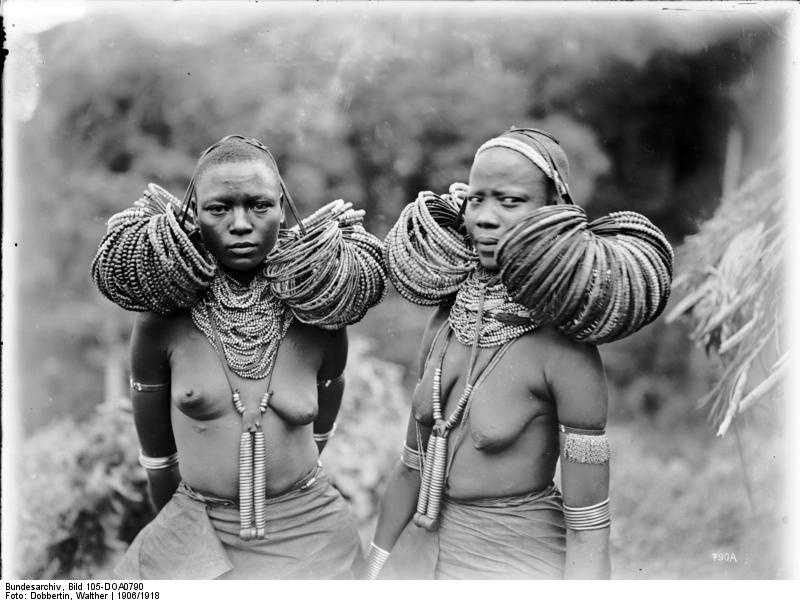 Traditional Shambaa beliefs center on healing the land and the body. Rainmakers were important people in the society. They were believed to have the power to prevent or cause rainfall. Mufika (ancestor worship) was important. The Shambaa believed that ignoring one's ancestors, especially one's deceased father, was sure to lead to misfortune.
The Protestant and Catholic faiths are both well established in Shambaai. The Christian influence in Shambaai was spread by missionaries through education and preaching. Islam was spread in Shambaai by the Zigua, mainly in the trading towns.

Traditionally, the Shambaa held initiation ceremonies for both young men and young women. Initiation for boys began with circumcision at the age of three or four years. At that time a kungwi (mentor) was chosen for him. At puberty, the initiate undergoes the gao ceremony, in which he is instructed in acceptable behavior.
In modern times, circumcision takes place in health facilities. The initiation ceremony has been shortened but is still required. Young women are not circumcised. However, they also go through a gao ceremony of instruction that is required before a young woman can marry or become a mother.

Greetings are important in Shambaa culture. There are particular greetings for different times of the day. Greetings may be prolonged, for it is customary to inquire after a person's family, health, and work. Younger people are expected to show respect and deference to their elders.
Traditionally, men and women were socially segregated, and this has formed the basis for all their relationships. Couples do not eat together at home. Mothers usually eat with their children while the father eats alone. Persons of opposite sexes do not show any affection publicly through bodily contact; this is considered highly inappropriate.

The Shambaa live in large villages consisting of several lineages (family groups). Villages are usually located on upper hillsides. Banana groves separate the homesteads and provide a source of food, a symbolic and practical insurance against famine. A traditional Shambaa house is round, with thatched roof and sides. There are also rectangular houses in Shambaai, with walls of wattle (interwoven sticks) and mud and thatched roofs. These are modeled on what is called a Swahili design. Now, these houses commonly have cement walls and corrugated metal roofs.

Polygyny (having multiple wives) was widely practiced by the Shambaa. A man married as many women as he could support. He also fathered as many children as possible. Under the influence of Christianity, marriages are now often monogamous (having only one spouse).
The wife was responsible for the daily farm work. A husband was responsible for increasing his mai (wealth). Wealth was increased mainly through acquisition of goats, cattle, and sheep. A person increased his status and standing in the community by lending out his livestock. This enabled the person to build a network of supporters who could help in times of need.

The Shambaa dress code has been greatly influenced by the Tanzanian coastal people who are mainly Muslim. Men wear kanzus (long, flowing white robes) and a small cap, or barghashia, on their heads. Women use lengths of colorful cloth as wraps for the body; these are called khangas and kitenges . A wrap may be worn over a dress or used to carry a baby on the back or hip. Married women cover their heads and clothes with two pieces of khanga cloth. Shambaa men often wear shirts and trousers in urban areas. Traditionally, women do not wear shorts in public other than for sporting events or in military camps. Secondhand clothing (mitumba) is generally worn by poorer people.

The Shambaa plant many different food crops adapted to the climate of the area, including tubers, medicinal plants, tobacco, beans, and bananas. Banana plants used to be the main food crop of the Shambaa. This has changed with the introduction of maize (corn) and cassava to the area. Cassava, a hardy root vegetable, is drought-resistant, and will survive when other crops fail due to lack of rainfall. Drought-resistant crops like cassava are grown as safeguards against famine.
The Shambaa diet is composed of starchy foods such as rice, maize, and sweet potatoes. These are usually accompanied by beans, meat, and vegetables. Dairy products are available, and sour milk is often drunk for breakfast. Meat consumption is on the increase.

The Shambaa have a rich cultural heritage of songs and dances. Songs are used to teach younger people their history and expected behavior for when they are adult members of the tribe. Drums were traditionally used to transmit messages of approaching danger as well as important news such as the death of a king. Storytelling by the elder generation is a popular evening pastime with children. Traditional dances are still popular, especially at wedding celebrations.
A wide variety of African music is popular among the Shambaa. The younger generation prefers to listen and dance to Western music, including reggae, pop, and rap.

The greatest problem facing the Shambaa today is the gradual loss of cultural identity. Young people generally prefer to adopt a national Tanzanian identity instead of a Shambaa identity. The Shambaa are trying to reverse this cultural erosion by recording their cultural values and history. Younger people in urban areas are encouraged to regularly visit Shambaai, where they may learn their traditions and converse in Shambala.
Another serious problem facing the Shambaa is a shortage of land. A population increase has led to a decrease in arable land. Soil depletion has resulted, since the land is never left unplanted to regain its nutrients. The government is trying to introduce more resiliant crops and better farming practices into the area.
Like all Tanzanians, the Shambaa face the problem of poverty. The World Bank classifies Tanzania as the second poorest country in the world, after Mozambique.