Claude Hélène Perrot said that before the publication of the work of these two authors (Magang-Ma-Mbuju and Mbumb Bwass), many studies devoted to the Jagas problem had shown that this warrior group was of diverse origins, B.M. Batsikama and M. Ipari had concluded that the invaders of Mbanza Kongo in 1568 were populations of Kongo origin. The Punu people migrated into The Republic of the Congo in the 16th century and migrated into Southern Gabon in the 18th century.

One of the well known Punu art objects are the white masks with nine dots on the forehead symbolizing the nine Punu clans, now known as the Punu masks.The masks are life size, they can cover a persons face. They are worn by the dancers in south Gabon. When there is a major community event the dancers wear these masks, one major event would be a dance performed for a secret society. Europeans have been trying to discover the Punu society for a long time, but not until June 1865 did the first European discover the first white mask. Later in 1925-30 Europeans had more access to the societies and the secrecy was less than before. 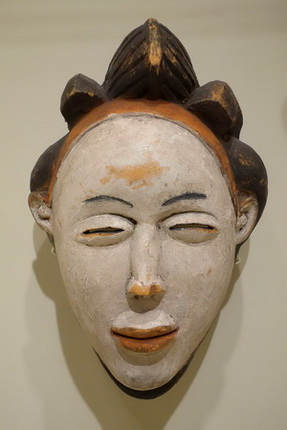 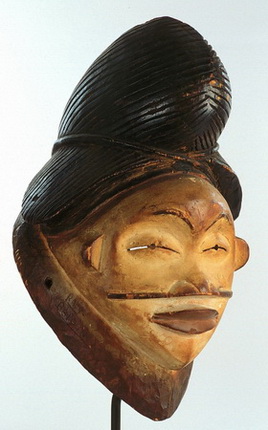 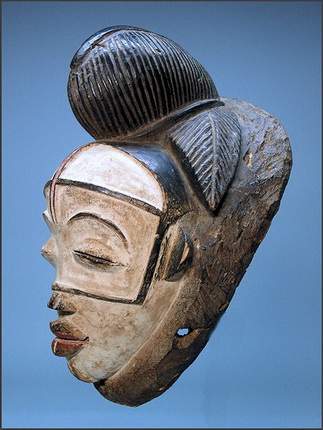 Black masks in Punu culture were worn by dancers as training masks, which perform first to announce the arrival of the white mask dancer which is more experienced. Sometimes when a misfortune happens to a group they take white masks and paint them black. This type of masks in only danced with in the dark at night. Different from the other two masks, these masks are rarely found in a museum because they used to hide them very well. They hid these masks because the belief that they are dangerous and they have an evil nature. 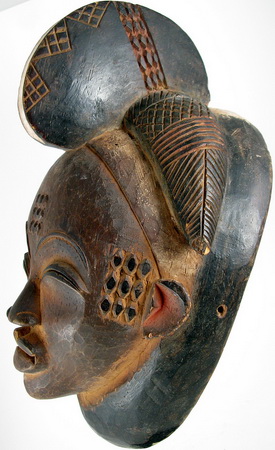 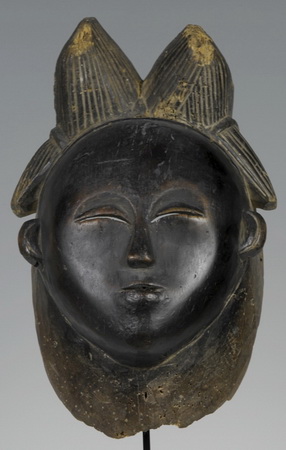 The Punu believe in their God Nyambye, they feared evil spirits, they used to do chirurgical operations after someone death to find out the cause of the dealth however if the cause of the late person could not be found it was then the wizard (mulosi) from the family circle who should be held responsible. People were jealous of successful people and they believe that their jealousy would cause the successful person harm or death. Illness was always seen as a work of an evil spirit and the only way to heal was by a special ritual to cast away the evil spirit's work.

There is very little known about the Punu religion, but similarly to their neighbors to the north, the Fang and Kota, the Punu carve wooden reliquary figures which are stylistically different, but similarly attached to a basket carrying the bones of individual family ancestors. This seems to indicate a similarity in religious practices in regard to ancestor worship. There is also an abundance of female masks in this area. Several reports from early travelers in this area link those masks to the Mukui society, about which very little is known. Other reports link them to dances celebrating the female ancestors of the Punu peoples.

Punu economy is based on shifting hoe farming conducted in fields that have been carved out of the rain forests through slash and burn techniques. This is supplemented when necessary with hunting, fishing, and livestock, such as goats, sheep, and chickens. The surrounding Equatorial forests also provide various fruits, nuts, and tubers for consumption. The main crops include banana, yams, cassava, maize, peanuts, and manioc. Most labor is divided between the sexes, with men doing most of the hunting, gathering and clearing of land and women doing the other agricultural tasks.

The Punu live in small villages in the Ogowe River Basin that each include several lineages and are led by a individuals within the community who have inherited their position matrilinearly, rather than by a centralized force.