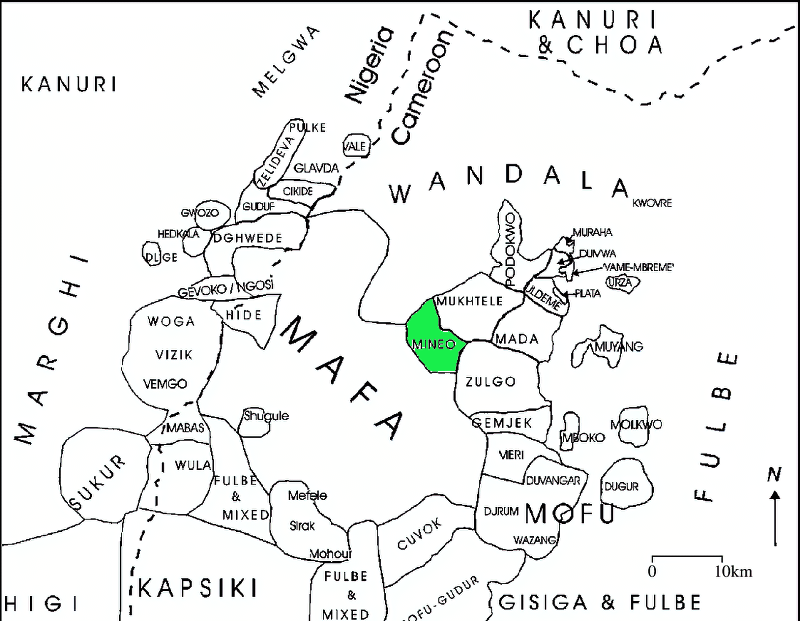 Barreteau (1984:168ff) classifies minew and zulgwa together as one dialect and gemzek as a another dialect. Both dialects belong to mafa-south. He claims that zulgwa and minew are closer to each other then gemzek and zelgwa. Also the SIL website Ethnologue lists minew together with ‘zulgwa’.

Muller-Kosack (1999) has no doubt that the Mineo are an ethnic group in their own right. Since Lembezat (1950) we find the Mineo displayed on ethnic maps of the region. Vincent (1991:60) has doubts whether the Mineo should be classified as Mofu-Diamare. Sometimes her informants include the Mineo into the ‘northern group’ of the ‘tsklam’ (Meri, Mboku, Gemjek, Zulgo), but most of the time they seem to be excluded (ibid). Vincent’s concept of Mofu-Diamere seems to get blurred at its northeastern frontier. R. Lukas (1973:17) informs us that the Mineo consist, like the Zulgo and Gemjek, of twelve lineage based settlements. Muller-Kosack (fieldnotes 1981) speaks only of eleven Mineo lineage wards.

No proper ethnographic survey has ever been conducted on the Mineo. The information available on the geographical origins of the Mineo ancestors is rather confusing. Muller-Kosack (1999) cannot see any direct link with the Mafa clan Jele as this is claimed by Boulet (see above). The ancestral link of ‘Kolo’om’ (R. Lukas) to Roua in Mafa land is the only convincing evidence so far. Roua is a settlement at the border to Mofu-Durum (see page Mafa and Mofu groups). It remains to be seen how close the Mineo are to the Zulgo and Mafa in terms of ethnicity.