The Messiria, known also under the name of Misseriya Arabs, are a branch of the Baggara ethnic grouping of Arab tribes. Their language is the Sudanese Arabic. Numbering over one million, the Baggara are the second largest ethnic group in Western Sudan, extending into Eastern Chad. They are primarily nomadic cattle herders and their journeys are dependent upon the seasons of the year. The use of the term Baggara carries negative connotations as slave raiders, so they prefer to be called instead Messiria. 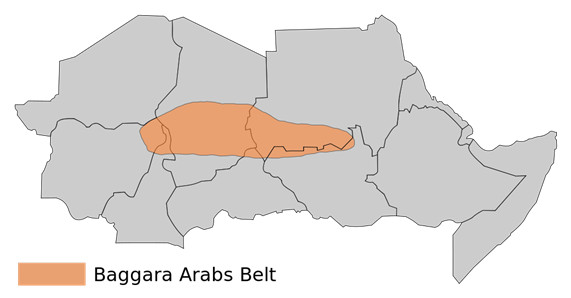 The Baggara are a grouping of Arab ethnic groups inhabiting the portion of Africa's Sahel mainly between Lake Chad and southern Kordofan, numbering over six million. They are known as Baggara in Sudan, and as Shuwa/Diffa Arabs in Chad and Nigeria. Their name derives from the Arabic word (Arabic: بقارة ‎) literally meaning "cattle herder".

Baggara have a common traditional mode of subsistence, nomadic cattle herding, although nowadays many lead a settled existence.

Collectively they do not all necessarily consider themselves one people, i.e., a single ethnic group. The term "baggara culture" was introduced in 1994 by Braukämper.

The political use of the term "baggara" in Sudan denoting a particular set of tribes is limited to Sudan. It often means a coalition of majority Arabs and a few indigenous African tribes (mainly Fur, Nuba and Fallata) with other Arab tribes of western Sudan (mainly Guhayna), as opposed to Bedouin Abbala Arab tribes. The bulk of "baggara Arabs" live in Chad, the rest live, or seasonally migrate to, southwest Sudan (specifically the southern portions of Darfur and Kordofan), and slivers of the Central African Republic, South Sudan, and Niger. Those who are still nomads migrate seasonally between grazing lands in the wet season and river areas in the dry season.

Their common language is known to academics by various names, such as Chadian Arabic, taken from the regions where the language is spoken. For much of the 20th century, this language was known to academics as "Shuwa Arabic", but "Shuwa" is a geographically and socially parochial term that has fallen into disuse among linguists specializing in the language, who instead refer to it as "Chadian Arabic" depending on the origin of the native speakers being consulted for a given academic project.

The origin of the Baggara is determined. According to a MacMichael, the group arrived in Wadai between Bornu and Darfur, where they spread from 1635 onwards through the fusion of the Arabic speaking population with the indigenous groups. Like other Arabic speaking tribes in the Sahara and the Sahel, Baggara tribes have origin ancestry from the Juhaynah Arab tribes who migrated directly from the Arabian peninsula or from other parts of north Africa.
Baggara tribes in Sudan include: the Rizeigat, Ta’isha, Beni Halba, and Habbaniya in Darfur, and the Messiria Zurug, Messiria Humur, Hawazma, and Awlad Himayd in Kordofan, and the Beni Selam on the White Nile. The Misseiria of Jebel Mun speak a Nilo-Saharan language, Miisiirii, related to the Tama of their traditional neighbors.
The small community of "Baggara Arabs" in the southeastern corner of Niger is known as Diffa Arabs for the Diffa Region. They occupy the shore of Lake Chad and migrated from Nigeria since World War II. Most of the Diffa Arabs claim descent from the Mahamid clan of Sudan and Chad.

The term Dar means land or location. The word Al or al and sometimes El or el corresponds to the definite article The in English. The term Dar Al Messiria means the land or location of the Messiria. According to Ian Cunnison 1966, the Arab nomads of the Sudan and Chad republics are of two kinds: camelmen (called Abbala) and cattlemen (called Baggara). the Term Baggara means simply cowman but the Sudanese apply the word particularly to the nomadic cattlemen, who span the belt of savanna between Lake Chad and the White Nile. This belt of territory has. been the homeland of the Baggara people for centuries. Ian Cunnison, referenced above said "History and environment together throw light on their distribution". In Sudan, while the Abbala live in the semi-desert part of the region: northern Kordofan and Darfur, the Baggara, by contrast, live on their southern fringes; occupying the area roughly south of 12 degrees north and extending well into flood basins of the White Nile to the south.

In general the Dar Al Messiria or their zones can be divided into three areas:

The Messiria in the three different zones have been separated for so long that they have developed localized cultural and social differences. The Messiria in Kordofan know little if anything about the Messiria in Dar Fur and Chad, but they belong to the same tribe and they have similar subtribal divisions and diversities.

700.000 Missirie nomadic Arabs live between Lake Chad and Abeche in central Chad. Their ecosystem consists of stony plains where they graze their animals.

Men manage the cattle and the crops of millet, yams, plantains, and cassava melons. They also build sun shelters, which they use for eating and entertaining while they are tending the herds. Young boys herd calves and small livestock. Most children attend a Koranic school, although girls usually withdraw after about six years.
Missirie ancestors emigrated from Sudan to Chad during the 14th century. They were primarily nomadic camel herders and slave traders. By the 18th century, the Arabs counted their wealth in their large herds of horses, cattle, goats, and sheep. Although the Arabs are respected by the Chad government because of their wealth in animals, they do not play a very large role in Chad's political arena. Their pastoral lifestyle has also saved them from being forced by the government to change culturally-an action that has disrupted the lives of the more settled peoples.

The Missirie generally have two homes-one in the village and one in a nomadic camp. During the dry season they live among more sedentary groups and share their agricultural lands. When the rains come the Missirie spread out among other Arab groups that live in the region. Marriage is used to strengthen kinship ties and is more a family than an individual concern. Arab men frequently have more than one wife. One wife usually lives in the nomadic camp, while the other lives in the village.

The roles of Missirie men and women are strictly separated. Women are responsible for almost all tasks concerning home and family, including the construction of adobe houses, woven straw tents, the cooking areas, or any other structures associated with the house. They are the children's primary caretakers. Women also milk the cows that provide the family with dairy products. They earn extra income (which they keep) by selling the milk, butter, cheese and other products.

Marriage among the Missirie strengthens kinship ties. First, marriage is more a family than an individual concern; senior males from each family make initial contacts and eventually negotiate the marriage contract. An ideal union reinforces the social, moral, and material position of the group. Second, parallel cousin marriage (that is, union between the children of brothers or male relatives more removed), is preferred. This custom encourages the duplication of bonds within the group rather than the creation of a far-flung network of more tenuous, individual alliances. Finally, the marriage ceremony is itself a community affair. Marriage among the Missirie is an expression of solidarity. The ceremony is celebrated by a faqih (Muslim religious leader), and a joyous procession of neighbours, relatives, and friends escorts the bride to the house of her husband.

Ouled Himet clan of the Missirie tribe, lives with its domestic animals between Hadjer el Hamis (Elephant Rock) near Lake Chad and Oum Hadger. It is one of the most traditional Arab groups in Chad. Young women continue to make intricate hairdos, they pierce their nose with metal rings and decorate themselves with beaded necklaces. Scarification tends to disappear but still can be seen in both men and women cheeks.

Almost any occasion - the arrival of a visitor, unexpected good fortune, or someone returning from a trip - is an excuse for a communal feast. Betrothal, marriage, and moving newlyweds to their new residence calls for a major celebration, because it is considered a life-stage transition. This celebration also offers young people an opportunity for courting. Even the death of a family member is followed by feasting after a mourning period.

Chadian Arabs are predominantly Sunni Muslims, but they are not particularly interested in Muslim fundamentalist ideals. They observe the five pillars of faith (declare the faith of Islam, say daily prayers, give alms, fast, and make the pilgrimage to Mecca).