The Ameru people comprise nine sections: the Igoji, Imenti, Tigania, Mitine, Igembe, Mwimbi, Muthambi, Chuka and Tharaka. The Tharaka live in the semi-arid part of the greater Meru and they, together with the Mwimbi, Muthambi and Chuka, form the Tharaka-Nithi County. The Ameru are however unrelated to the Wameru of northern Tanzania, other than both being avid farming Bantu communities.

The languages of Meru, Chuka, Embu and Kikuyu are somewhat understandable to one another with some substantial differences.  The Meru speak at least seven different dialects, but the Bible translation being used is in the Imenti dialect.  The differences in the dialects reflect the varied Bantu origins and influences from Cushite and Nilotic, as well as different Bantu, neighbors.  As a whole Meru exhibits much older Bantu characteristics in grammar and phonetic forms than the neighboring languages.  Even so, it still bears a close resemblance to Kikuyu and Kamba.

The Meru have fairly strict circumcision customs that affect all of life.  From the time of circumcision, boys no longer have contact with their mother and girls no longer have contact with their father.  A separate house is built for the sons and the mother leaves their food outside the door.  This does vary to some degree depending on the level of urban influence, but is still practiced in Meru town.  This is one of the major reasons that all secondary schools in Meru are boarding schools.

The Meru are primarily agrarian, with some animals.  Their home life and culture is similar to other Highland Bantus.  The Tharaka live in the dry desert area, a much harsher life than most Meru.  Meru have had a strong educational foundation has been provided by Christian mission schools.

Traditionally, the Meru followed persons called "Mugwe" who served as a prophet and spiritual leader.  Mugwes still exist today but are said to have only an ornamental purpose.  In the days of mission comity agreements, Meru was given to the Methodists.  Methodism has therefore become the primary religion of the region.  In many cases, church membership is a cultural rather than spiritual matter.

Depending upon who one asks, Meru history spans about 270 years.  There are no written records for the first 200 and what may be learned must come from memories of the community's elders.  The predominant tradition has to do with a place called "Mbwa."  This tradition tells how the Meruan ancestors were captured by the Nguuntune (or Nhuuntune, meaning "Red People") and taken into captivity on the island of Mbwa.  Some analysts interpret this "Red People" tradition as referring to Arabs.

Because conditions were intolerable, secret preparations were made to leave Mbwa. Some analysts interpret Mbwa as re;ated to present day Yemen.  When the day came to leave Mbwa, a corridor of dry land is said to have been created for the people to pass through the Red Sea.  They later followed a route that took them to the hills of Marsabit, eventually reaching the Indian Ocean coast.

There they stayed for some time; however, due to climatic conditions and threat from Arabs, they traveled farther south until they came to the River Tana basin.  The Chuka separated from them there, and inland toward Mt Kenya.  Most traditions say the rest went as far south as Tanzania until finally reaching the Mount Kenya area.

There is a confusion here, since you cannot get to Mt Kenya by going south form the mouth of the Tana River, as the mountain is northwest up the Tana from there.  They could have gone south, even as far as what is now known as Tanzania, and then swung inland and back northwest.

This confusion or combination of geographical features and directions seems to combine two separate myths of origin from different segments of Meru ancestral history, one from the north and another from the east.  In trying to make sense of the confusing geography of the oral tradition, some identify Mbwa with Manda Island near Lamu and the water as the ocean channel.  The eastern origin tradition indicates westward migration from the coast.  This correlates with traditions of other Bantu peoples like the Giriama and the Pokomo. 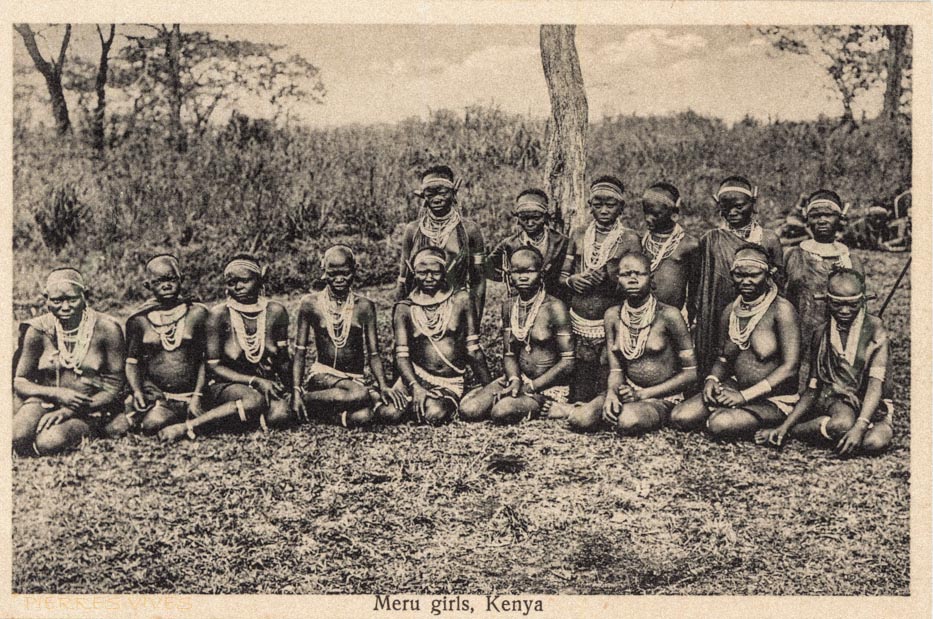 In the past the Meru were in a coalition with the Embu and Kikuyu which yielded some political power. The coalition, called Gikuyu-Embu-Meru Association (GEMA), is not as strong as it once was, but the Meru typically voted with the opposition.  This does vary from location to location, but would generally hold true.  Developments under the multi-party experiment since 1992 renewed an informal political alliance between GEMA peoples and much of the Luo "community."  It is not clear how the political situation of position of the Meru has been affected by the political-ethnic violence that scoured Kenya in the first half of 2008.

The Ameru have since the 17th Century been governed by elected and hierarchical councils of elders from the clan level right up to the supreme Njuri Ncheke Council. To become a member of the Njuri-Ncheke is the highest social rank to which a Meru man can aspire. The elders forming the Njuri-Ncheke are carefully selected and comprise mature, composed, respected and incorruptible members of the community. This is necessary as their work requires great wisdom, personal discipline, and knowledge of the traditions. The Njuri Ncheke is also the apex of the Meru traditional judicial system and their edicts apply across the entire community.

The functions of the Njuri-Ncheke are to make and execute community laws, to listen to and settle disputes, and to pass on community knowledge and norms across the generations in their role as the custodians of traditional culture. Local disputes will invariably first be dealt with by lower ranks of the elders (Kiama), then the middle rank (Njuri) and finally the Njuri-Ncheke. However, Njuri Ncheke does not handle matters involving non-Meru people, or those that are expressly under the Kenya's common law. The determination of cases by the Njuri Ncheke, just like is for common law, relies a lot on case law and precedence.

A lesser known, yet important function of the Njuri-Ncheke, is the overseeing and enforcing the rules and regulations controlling the use and conservation of open grasslands, salt-licks and forests. Their work as conservators extends to the preservation of the Sacred Sites.

The Njuri Ncheke is also influential in the socio-economic and political decision making amongst the Meru. The Council of Elders spearheaded the establishment of the Meru College of Science and Technology and donated 641 acres of community land in 1983 for its siting and development. The college was in 2008 upgraded to a University College of Jomo Kenyatta University of Agriculture and Technology (JKUAT) and in early 2013 awarded a charter by H.E Mwai Kibaki - the then President of Kenya and renamed Meru University of Science and Technology(MUST). Njuri Ncheke is represented in the University Council.

The Meru are primarily agrarian, and their home life and culture is similar to other Highland Bantus. The Meru have maintained adherence to a fairly strict customary code amongst the various cohorts of the population. For instance circumcision is a mandatory rite of passage for boys during which time cultural education including community norms and expectations, such as respect for elders and protection of children are taught in a seclusion period that may last up to a month. As a matter of principle, young men must ensure minimal contact with their "Mothers" after initiation. Nowadays however the depth of instruction varies depending on the extent of urban influence. Previously, girls would also undergo circumcision, but the practice was outlawed by Njuri Ncheke in April 1956. The practice has been progressively abandoned and is being replaced by instruction based alternative rites of passage.

The Meru have had a strong modern educational heritage provided by the Christian missionaries. The main education institutions were started or sponsored by the Catholic, the Methodist and the Presbyterian Churches. The Greater Meru has numerous institutions of learning including primary schools, secondary schools, teacher training colleges, nursing schools, technical institutes and Universities. One of the most prestigious chartered private university in Kenya, KEMU was the first to be established in the area in 2006. Two chartered public universities, Chuka University in Tharaka-Nithi County and Meru University of Science and Technology (MUST) at Nchiru- Meru County have since been established. Several other institutions of higher learning including the University of Nairobi, Egerton University, Kenyatta University, Co-operative University College, Nazarene University and Mt. Kenya University have established their satellite campuses in the area, making the Greater Meru a key education hub in Kenya

The Ameru are primarily agrarian, growing a variety of crops and keeping livestock. The Greater Meru is endowed with soils and climatic conditions that allow for the production of a variety of commodities including wheat, barley, potatoes, millet, sorghum and maize. High grade tea, coffee, bananas and miraa (Khat) are the key cash crops. The Meru were indeed the first Africans to grow coffee in Kenya in early 1930s upon the implementation of the Devonshire White Paper of 1923. Other crops include groundnuts and a wide range of legumes, vegetables and fruits. The Meru are also keepers of livestock both for subsistence and commercial purposes. These include dairy and beef cattle, goats, sheep, poultry and honey bees. Besides, the area has huge potential for tourism by virtue of hosting the Meru and Mount Kenya National Parks and the Lewa Conservancy. Mining activity is also expected to pick up once the ongoing exploratory works on the iron-ore deposits in Tharaka are completed.

The Ameru wield a lot of political influence in Kenya mainly due to their astute and strategic political organization. The community has not produced a President for the Republic of Kenya so far. However, members of the community have always held some key and strategic positions in the governments of the day. In the early years of Kenya's independence, the Meru were in the Gikuyu-Embu-Meru Association GEMA, a political mobilization outfit formed during the reign of Mzee Jomo Kenyatta. GEMA was however formally banned in 1980 during a national consultantive conference at the Kenya Institute of Administration, Kabete under the chairmanship of President Daniel Arap Moi, but since the advent of plural politics in Kenya in 1992, the Meru have largely voted with the Embu in all subsequent presidential elections.

In the non-presidential election, most constituencies in the Greater Meru vote in candidates based more on their individual merit than on the basis of the sponsoring political party. This particularly manifested itself in the general elections of 4 March 2013 where the Orange Democratic Party (ODM) captured two seats (Hon. Cyprian Kubai Iringo MP for Igembe Central and Hon. Mpuru Aburi MP for Tigania East) in Meru County despite the predominance of the Jubilee Coalition in the upper Eastern and Central Kenya region. The elections also saw the historic election of Hon. Rahim Dawood, a politician of Asian origin to represent Imenti North Constituency and Hon. Kinoti Gatobu, a 26-year-old independent candidate elected to represent Buuri constituency. Subsequent to the same elections, Prof. Kithure Kindiki, an International Constitutional Lawyer and a first time Senator (Tharaka-Nithi County) became the Majority Leader in the Senate.

The historical and cultural artifacts of the Meru are preserved at the Meru Museum, formerly the colonial DC's office located in Meru Town. The Njuri Ncheke Shrine at Nchiru is also gazetted as a heritage site and placed under the care of the National Museums of Kenya. The Shrine is accessible and open to the public most time of the year unless there are Njuri Ncheke activities at the site. Members of the Njuri Ncheke, though bound by a strict oath of secrecy, can also provide valuable and authoritative information and insights into the Meru traditions and culture dating back to the yore and transmitted through generations.