The Tswana-speaking people of Botswana call these Bantu natives from Barotseland in Zambia as "Mbukushu," but the collective name the people have given to themselves is "Hambukushu."  One person from the tribe is Mbukushu and their language is Simbukushu.

The Hambukushu  people together with four other tribes in South Africa are known as "The Okavango Delta" people. The four including:

In the time past, Hambukushu people called themselves as the Haguva, "the people.'and one person is a "guva."  According to some Hambukushu oral historians, Hambukushu also used to refer to themselves as "Havamasiko" before they arrived along the Okavango River about the beginning of 19th century. 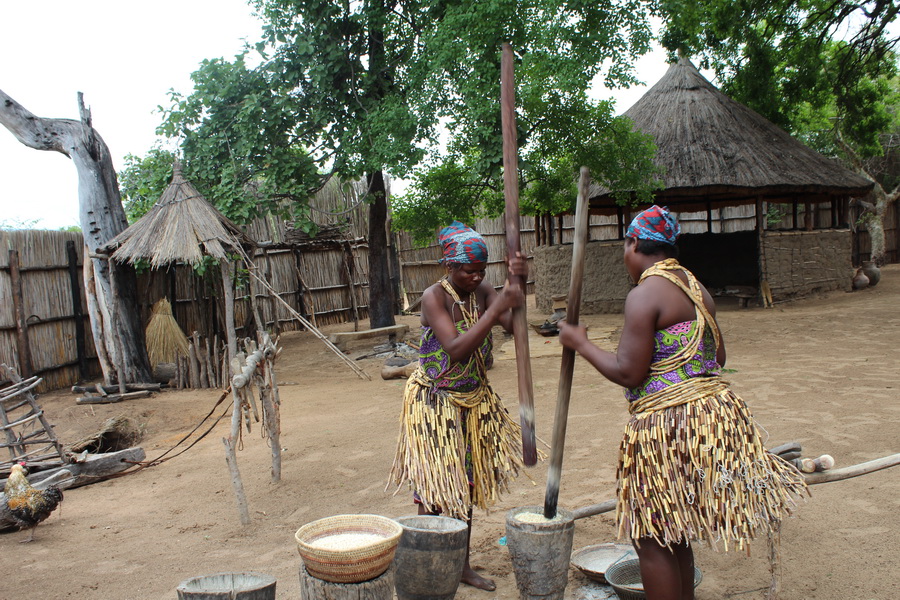 The Hambukushu are scattered in small extended family homestead and larger communities along the rivers of the northern Ngamiland of Botswana, northern Namibia, and Barotseland of Zambia along the Kwando River in what is called the Mashi region. In Mashi region Hambukushu live along the banks of Kwando River which forms the southeastern border of Angola and Zambia and also further south where the River flows through the Caprivi Strip of Namibia and thence into the Chobe.

The main concentration of hambukushu in Namibia is along the banks of Okavanago river and on the islands in the River from Andara to the border of Botswana. Humbuskushu also live in small communities along the river in smaller numbers as afar as Dirico westward along the Okavango to the conjunction of  the Cuito River of Angola. There are others who also live on the Angola side of the river.

It is believed that many Hambukushu were sold into slavery to Mambari traders for the Portuguese.and others became the slaves of the Lozi.

The first arrivals in Botswana were recorded in December 1967. Reverend Wynne, a priest who worked with the refugees for many years, describes how they came in a terrible state: "They were naked except for a rough cloth covering their middle. The women had simple traditional ornaments and carried a plaited screen mat, a bundle with a few things and a water pot on their heads."

The refugees had nothing to eat but wild fruits in the bush. Emaciated and weakened by war and famine, many people died of sleeping sickness. In order to survive, the refugees looked for work among the Bayeye people who were traditionally farming the Etsha region of northern Botswana.
When the Hambukushu first arrived in Botswana, they were met by a wave of overwhelming hospitality and support. In order to give the newly-arrived refugees a status in Botswana, the Paramount Chief of the Batawana, Letsholatebe, adopted them as members of his tribe and allocated them land. The refugees were settled in 13 villages.

The UN launched an emergency feeding programme, provided agricultural tools and seeds while the national Red Cross helped with medicine. The Botswana government sent an agricultural expert to train the Hambukushu on how to farm on a soil and in a climate foreign to them. The District Council financed the building of a school. Literacy training for children and adults was organised.

Hamkubushu people are agro-fishery people. They engage in subsistence agriculture coupled with some sort of animal husbandry. Fishing is the major occupation of the Hambukushu people as the are riverine people.

The Hambukushu are resourceful people, they grow maize, pumpkins and watermelons and occupy themselves with brick-making, bee-keeping, and reed trade. But above all, they are known for their basket-making skills.

The elaborate baskets are made of palm fibre that is dyed with roots or bark to achieve different shades of brown, orange and cream. They sell their baskets to the Botswana Council of Churches (BCC), which sells them to craft traders in Botswana and abroad. These baskets are of high quality and beautiful design and are among the finest pieces of craft produced in Africa.

Katutu has been working in the basket project for five years. On behalf of the BCC, she receives the order, buys the basket from the women in the village and prepares the shipments to the capital. She also supervises the basket shop in Etsha.

Hambukushu people has a chief that preside over their territory. It used to be like that before the coming of the White man and subsequently, the taking over of the Okavango area administration by the Tswana people. According to Passarge, "At the head of the tribe is the chief who is assisted by counsel of family heads. The power of the chief was not so unlimited as for instance with the Ovambo, but still considerable. One pays to him yearly dues ((gifts) in corn, skin, cattle and wild game. To him alone one owes military allegiance (service) and treatment of foreign travelers depend upon his mood."
The chief has servants, the harpika, and special body guards, ngambera, to protect him against his enemies and foreign attacks.
Hambukushu has a role for a chief rain-maker. The great traditional rain-maker chief ushers in agricultural activities, officiated and performed by the leading dances of Rengo (Harvest festival).

Hambukushu have a keen belief in religion. In their traditional cosmology, they worship a Supreme being and a creator god, Nyembe. They believe that he is that God above every other gods. He punishes the evil doer and bless the good one.

Hathimo; Hambukushu believe in large group of spirits who are individual souls of the deceased ancestors. the Hambukushu offer practical sacrifices to these ancestral spirits. For more on this,click on this link:The-Hambukushu-Rainmakers-of-the-Okavango.

Hambukushu or the ‘rainmakers of Okavango’ (believed to perform rituals that make rainfall), whose language is called sembukushu,  are a tribe found in the Okavango, which is in north-western parts of Botswana.

They are said to believe in a God called Nyembe whom they worshiped and obviously because of the colonization of Botswana had to abandon that belief and adopt a new religion, Christianity, which led to abolishing most of the religious and cultural practices. There are, nevertheless some Hambukushu who still practice this worship of gods to date.

Death and Life After death

According to their belief a dead person is not really dead. Though a body upon death is laid to rest, the soul, the spirit (hathimo) departs the body and goes to the spirit world. Good peoples spirit ascend to heaven (Diwiru) to live with Nyembi (god). The evil spirit goes to live with Shadapinyi`s (Nyembi`s evil messenger of death`s) abode where they must work hard in the sun eat bad food and drink bad beer. The spirit Both evil and good return to earth to visit their relatives, to make demand upon them during muthimo (spirit`s) visitations and to maintain Hambukushu establishment values.

They are known also for their traditional music that they call seperu, a dance that was used initially in rituals as they are ancestral worshipers. This dance is performed by both men and women alike. Hambukushu also have a dance called njangura, which is performed to conduct a healing.