Mandé is a family of ethnic groups in Western Africa who speak any of the many related Mande languages of the region. Various Mandé groups are found in

The Mande are comprised of a number of different ethnic groups: 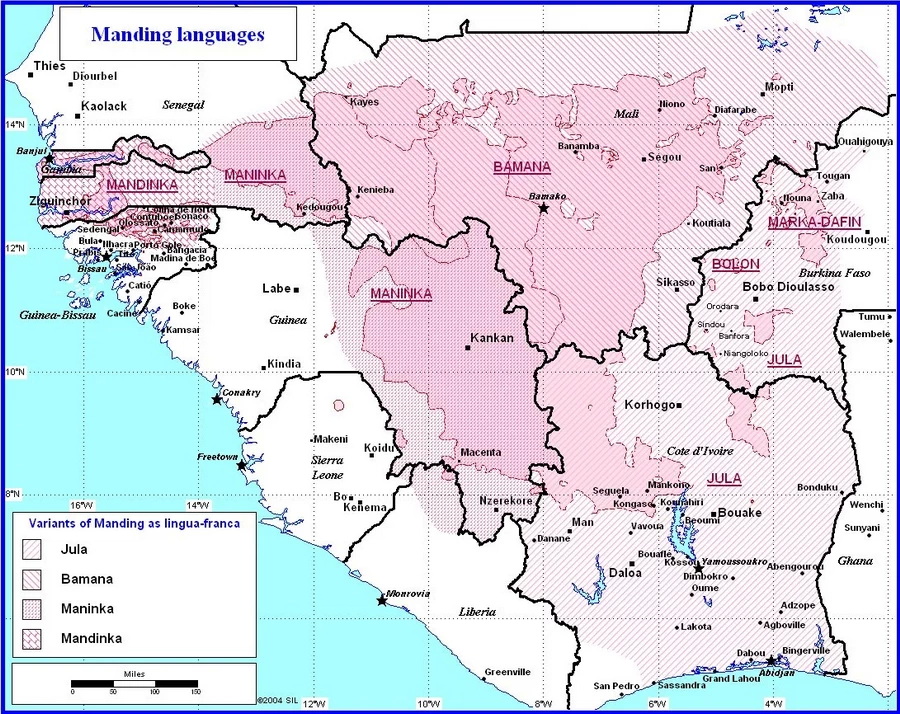 The largest group, numbering more than 1.6 million, is that of the Bamana. Some of the smaller groups, such as the Bozo and the Yalunka, have fewer than 50,000 members each.

Mandé people inhabit various environments, from coastal rainforests to the sparse Sahel. They have a wide range of cuisines, cultures, and beliefs, and are organized mainly by their language group. Today they are predominantly Muslim and follow a caste system.

Islam has played a central role in identifying the Mandé as a supranational ethnic group that transcended individual tribal affiliations. Mandé influence historically spread far beyond immediate areas to other neighboring Muslim West Africans groups who inhabited the sahel and savanna. The Mandé conducted increased trade down the River Niger or overland, and achieved military conquest with the expansion of the Ghana Empire, Mali Empire, and Kaabu and Wassoulou states.

There is tremendous regional variation among the Mande, both in dialect and in culture. There are many different dialects of Mande, and some, such as Maninka and Mandinko, are mutually unintelligible. Some aspects of culture, such as the practice of Islam, also vary greatly from area to area and even from community to community.

All Mande are primarily agriculturists, and most are full-time subsistence farmers. Many towns are surrounded by women's garden plots and by much larger family fields. Rice is an important staple crop. During planting and harvesting, much time is spent in the fields. During other seasons, there is time for other activities, and some farmers have part-time businesses to supplement their harvests.

All of the Mande groups have similar social systems. Until the advent of colonialism in the nineteenth century, the Mande were divided into three main groups: farmers and nobles, specialized professionals, and slaves. This social structure probably developed with the founding of the Mali Empire in the thirteenth century. The ways in which membership in and interaction among these groups were defined varied between ethnic groups and changed rapidly over time. After the turn of the twentieth century, European colonialists drastically changed the social structure of the Mande by outlawing slavery; however, the position of slave still persists within a castelike system in Mande society.

The Mande are a patrilineal group, with the oldest male acting as lineage head. A minor lineage is often defined territorially as the houses of a man and his immediate family. A major lineage includes the houses of genealogical brothers and their families. A hamlet is the next larger unit, containing the houses of men of the same clan name. The men of a hamlet attend ritual meetings together and are arranged roughly according to seniority based on age. The hamlet also defines an exogamous group, wherein the men of one hamlet give their daughters in marriage to the men of other hamlets.

Heavy farmwork is done by men; women have both farm and domestic duties. Women perform much of the time-consuming work, such as cooking, cleaning, and child rearing. Whereas men usually occupy the village-based leaderhip positions, such as headman and imam, or religious leader, the women of a village often have their own organization, with a leader who corresponds to the male religious leader. This "circumcision queen," as she is sometimes known, is responsible for the girls' circumcision ceremonies and is acknowledged as an expert on health, medicine, and the raising of children.

Predominantly Muslim, the Mandé have a patrilineal kinship system and patriarchal society. They usually observe ritual washing and daily prayers of Islam but few wear Arab dress. Their women wear veils. The most famous Mandé practices are the sanankuya or "joking relationship" among clans.

Their secret fraternal orders and sororities, known as Poro and Sande, or Bundu, respectively, are based on ancient traditions believed to have emerged about 1000 CE. These govern the internal order of their society, with important rites of passage and entry into the gender societies as boys and girls come of age in puberty.

Traditionally, Mandé society is hierarchical or "caste"-based, with nobility and vassals. There were also serfs (Jonw/Jong(o)), often prisoners or captives taken in warfare, and usually from competitors of their territory. The descendants of former kings and generals had a higher status than both their nomadic and more settled compatriots.

With time, that status difference has eroded, corresponding to the economic fortunes of the groups. Although the Mandé arrived in many of their present locations as raiders or traders, they gradually adapted to their regions. In the 21st century, most work either as settled agriculturalists or nomadic fishermen. Some are skilled as blacksmiths, cattle herders, and griots or bards.

Fadenya or “father-childness” is a word used by Mandé peoples, originally to describe the tensions between half-brothers with the same father and different mothers. The concept of fadenya has been stretched and is often used to describe the political and social dynamism of the Mandé world. Fadenya is often discussed in contrast to badenya, or mother-childness.

The Mandé culture is carried by oral histories, particularly the Epic of Sundiata. Teaching centers known as kumayoro teach the oral histories and techniques under keepers of tradition known as nyamankala. These nyamankala form an important part of Mandé culture due to their role in preserving oral tradition. Kela school, the most notable, is vital in perpetuating oral tradition. Because of their strong work, the versions of the Sundiata epic tend to be fairly similar. The Kela version is considered the official one, and the epic is performed every seven years. The Kela version includes a written document called a tariku. This intersection of written and oral history is unique to Mandé culture.

The epic is typically performed in two ways: one is intended for teaching or rehearsing, and the other is more official, intended to convey the important information to a large audience. Part of the teaching performance involves the presentation of gifts from clans involved in the epic. The official version can use a musical instrument; it does not allow audience interruptions. Different Mandé clans play different instruments in their performances of the epic.

The Kandasi also started a school for oral history.

Mandé literature includes the Epic of Sundiata, an epic poem recounting the rise of Sundiata Keita, the founder of the Mali Empire. Ethnomusicologist Eric Charry notes that these tales "for a vast body of oral and written literature" ranging from Ibn Khaldun's 14th-century Arabic-language account to French colonial anthologies collecting local oral histories to modern recordings, transcriptions, translations, and performance. Tarikh al-Fattash and Tarikh al-Sudan are two important Timbuktu chronicles. By the late 1990s, there were reportedly 64 published versions of the Epic of Sunjata. Although traditionally attributed to Mahmud Kati, Tarikh al-Fattash was written by at least three different authors. Among the Mandé, griots are a group, traditionally a specialized caste who are bards, storytellers, and oral historians.

Most of the Mandé groups in the westernmost part of West Africa have been predominantly Muslim since as early as the 13th century. Others, such as the Bambara, converted to Islam as late as the 19th century. Muslim Manden also hold traditional beliefs, such as in the rituals of initiation groups like Chiwara, and Dwo, and beliefs in the power of Juju. Many smaller Manden groups, such as the Bobo, retain pre-Islamic belief systems in their entirety.

According to oral histories, the Mandé, in particular the Soninke, contributed through trade and settlement to the Islamization of non-Mandé Gur groups at the edge of the Sahel in West Africa.

Much Mandé art is in the form of jewelry and carvings. The masks associated with the fraternal and sorority associations of the Marka and the Mendé are probably the best-known, and finely crafted in the region. The Mandé also produce beautifully woven fabrics which are popular throughout western Africa. They also create gold and silver necklaces, bracelets, armlets, and earrings.

The bells on the necklaces are of the type believed to be heard by spirits, ringing in both worlds, that of the ancestors and the living. Mandé hunters often wear a single bell, which can be easily silenced when stealth is necessary. Women, on the other hand, often wear multiple bells, representative of concepts of community, since the bells ring harmoniously together.

The best known traditional Mandé music is played on the kora, a stringed instrument with 21 or more strings. It is performed by families of musicians known as Jeliw (sing. Jeli), or in French as griots. The kora is a unique harp-lute with a notched wooden bridge. It is arguably the most complex chordophone of Africa.

The N'goni is the ancestor of the modern banjo, and is also played by jelis.

Griots are professional bards in northern West Africa, keepers of their great oral epic traditions and history. They are trusted and powerful advisors of Mandé leaders. Among the most celebrated of these today are Toumani Diabate, Mamadou Diabate, and Kandia Kouyaté.