The Mambilla or Mambila people of Nigeria live on the Mambilla plateau (in 'Sardauna' local government area of Taraba State in Nigeria). A small fraction of Mambilla migrants left the Mambilla Plateau for the Ndom Plain (also known as the Tikar Plain) on the Cameroon side of the international border as well as in a couple of small villages, such as New Namba, further north towards the towns of Gashaka and Banyo. The preferred ethnonym is spelt Mambila in Cameroon and Mambilla in Nigeria. "Norr" is also used (the word for person in Nigerian dialects of Mambilla) (Bami-Yuno, ms).

The Mambilla / Mambila people of Nigeria and Cameroon regard themselves as a group with a common identity. They are the denizens of the Mambilla Region, and have been in their homeland for upwards of 4,000 years (Zeitlyn & Connell, 2003). In Nigerian dialects they refer to themselves as 'Norr' (the people) while in Cameroon there is a collective noun 'Ba' that is used in the unmarked sense to refer to the Mambilla, and also to refer to Mambilla in Cameroon on the Ndom or northern Tikar plain (see below) contrastively with neighbouring Mambilla on the highlands of the Mambilla plateau who can be referred to as "Bo ba bo". The populations of different Mambilla villages speak different dialects of Mambilla or closely related Mambiloid languages. They also share a set of closely related cultural practices, in particular a conjunction of masquerade and oath-taking called "suu", "shua", "sua" or "shuaga". In the Somie (Ndiba) dialect this is phonetically written as [ʃwaɣa]. See discussion in "Sua in Somie" cited below. A locally written French language historical source for Somie history is Zeitlyn Mial & Mbe 2000.

The Mambila language is a congeries of dialects and related languages. The SIL Ethnologue database gives two codes MCU for the Cameroonian dialects and MZK for the Nigerian dialects. See the survey work of Bruce Connell on the VIMS website cited below, and the article on Mambiloid languages. The Common Mambilla or Tungbo Dialect is the most widely understood Mambila dialect in Nigeria. It is also the literary language of Mambilla for the vast majority who inhabit the Mambilla Plateau. The Mambila New Testament known as 'Li Fa' and several Mambilla Language study texts are written in the Common Mambilla dialect for Nigeria. A New Testament in Ju Ba is also available for speakers of Cameroonian dialects.

Most Mambilla live on the Mambilla plateau with their modern capital at Bommi (Gembu in "Sardauna" Local Government. ). 6.713833°N 11.25002°E in Taraba State of Nigeria [Note that the traditional and historical name of this local government area has been "Mambilla", and that the "Sardauna" misnomer is a modern imposition by external or non-indigenous peoples, particularly, in conjunction with the defunct Jega Government of 1984]. This is a highland plateau, the northerly continuation of the Bamenda grassfields. The plateau is dissected by many rivers (notably the River Donga) leaving a complex geography of steep valleys separated by highlands (all of similar altitude). The Gang Peak, located in the northeastern corner of the Mambilla Plateau, on the Mambilla-Gashaka-Cameroon tri-point boundary zone, is Nigeria's loftiest landform. Villages are found both on the hilltops and on valley bottoms, and are relatively isolated from one another particularly during the rainy seasons when river crossings can be difficult (and impossible for motorised transport). Agriculture is concentrated on the valley bottoms while the highlands have been extensively grazed since the 1940s, i.e. since the immigration of cattle graziers towards the end of British administration (it was part of British Cameroon until the referendum of 1959/61). There has been overgrazing and erosion has caused considerable problems from the late 1970s onwards.

A smaller number of Mambilla, migrants from Nyo or Mvor in southern Mambilla Plateau and other villages, are to be found on the edge of the Ndom (northern Tikar) plain in Cameroon at the foot of the escarpment of the Mambilla Plateau. The principal Cameroonian villages are Atta, Sonkolong and Somié. This is an area which, beginning from about A.D 1790, they, in a piece-meal fashion, progressively captured from the Twumwu, a pre-Tikar group that inhabited the Ndom Plain (Zeitlyn & Connell, 2003). At an altitude of some 700 m, these Ndom villages live in a different ecological zone from those of the Plateau: for example, oil palm plantations and gallery forest are found there.

Linguistic evidence indicates that Mambila ancestors were members of the original Bantu linguistic split that occurred approximately 2,000 years ago. It is also probable, given the close similarities between languages spoken in the immediate area of northern Cameroon and adjacent Nigeria, that the split occurred in this very region. Descendants of the Bantu have expanded across Africa to the eastern coast and south to the Cape in the years since that split occurred. The Mambila themselves moved slightly southwards as a result of Fulani pressure from the North in the 17th and 18th centuries.

The central location of the Mambila has allowed them to incorporate food stuffs from all over the world into their agricultural products. The primary cereal crops include sorghum, rice, and millet. They also grow bananas, yams, maize, manioc, peppers, peanuts, sweet potatoes, and tobacco. They acquired the practice of milking cattle from the Fulani and also use manure from the cattle as fertilizer. Goats, chickens, dogs, and sheep are raised for meat. Some hunting and fishing is done, but neither contribute significantly to the daily economy. Both men and women are involved in farming.

Political authority within individual communities is invested in a hereditary headman, who is assisted in his duties by a council of elders. The Bamilike are matrilineal to a higher degree than most of their neighbors. Children become the property of the woman's family and are often cared for and adopted by the mother's brother. There are also secret masking societies, which contribute to community social order through initiation and public education.

Most of the people in this region have been influenced to some degree by the Moslem Fulani, and the Mambila are no exception. They have not forgotten their practice of commemorating and remembering the ancestors through sculpture and prayer. Both Moslem and Mambila religions exist side by side, each one serving its own purpose.

The Mambila Plateau lies north of the grasslands. The inhabitants developed unique art styles of sculpture made of clay, terracotta, pith, and wood. Wood carving is done primarily by men, yet there is no one specific specialist. Tools are a creation of the carver themselves, creating tools as needed. Things like chisels, curved knives, straight knives are made by the sculptor. Using these handmade tools leaves room for error and never leaves and entirely smooth surface. Sculptures with heart shaped faces symbolize the earliest artistic endeavors, while current mask display stylizations of birds, beasts, and humans. A majority of Mambila figures in the Mambila Plateau were taken by art traders in the 1960s and 1970s, leaving very few figures and sculptures to be documented. The most documented figures of the Mambila culture are Tadep and Kike figures.

Tadep depict male and female pairs usually carved from low density wood. They can also depict singular figures of multiples of one sex. Kike are figures carved and made from the pith of raffia palm. and are larger statue type figures. These figures would often be placed inside of granaries, while other statues are displayed on the outside as well. These objects were sacra of associations related to illness and healing. Tadep and Kike were part of the Sauga association.

There are several eccentricities that set their art apart from other cultures. Mambila figures made of soft pith, and the attachment to shrines and sacred enclosures are something that only certain sexes are allowed to see. The pith figures were to act as embodiments of visiting ancestral spirits. Ancestral spirits guarded family treasures located within shrines by embodying these figurines. Another distinction is the annual application of their color scheme of red, white, and black to functioning objects. The male figure had a small opening in the abdomen as a receptacle for food particles, while the female figure had a blocked off abdomen opening.

During the biannual dance that takes place in June or July and November or December, the young unmarried people of the villages are allowed freedom of sexual experimentation. Typically after the dancing and pairing off of the unmarried, they celebrate the planting of crops with a celebration that happens only for men. Men travel from village to village for festivities which include dance, sports, and form friendships that promote intertribal relations. Masks are worn during this time and can only be seen by men. The "Suah Bvur" is a mask of the first rank, typically like a helmet and worn over the head, resting on the wearers shoulders. It is always accompanied by a number of second rank masks like the "Suah Dua", which rest on top of the head. Almost all masks and art figures are kept from women as they are not allowed to see them, or be any part of them. 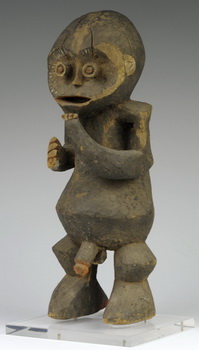 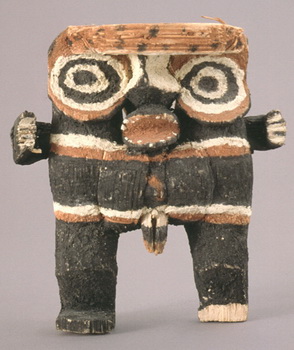 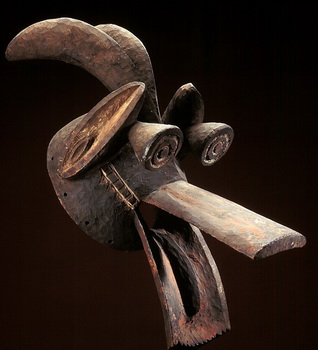