The upper Ulindi valley has a richly diverse fauna, including many monkey species, chimpanzees, leopards, buffaloes, elephants and antelopes. The valley is administratively divided into the Mwenga and Shabunda territories of South Kivu Province and the Pangi Territory of Maniema Province.

According to legend, the name Lega comes from a mythical ancestor who migrated to Kivu Province from the north. Neighbouring groups use other names to identify the Lega: the Songola, for example, call them Baki, while the Shi refer to them as Bembe.

The Lega speak a language called Kilega. Because of its resemblance to languages spoken by the Babila, Bembe, Bangubangu, Kanu, and Songola, many ethnologists and anthropologists believe that these groups share a common ancestry.

The Lega share two social institutions that play an important role in strengthening unity among them: family and a complex organizartion called the Bwami Society. These two traditions help determine the social status of individuals.

Within Lega families, descent and inheritance are passed through the father's line. Each lineage or clan chooses a leader from among the oldest, wisest, and most- respected heads of families. This leader, called nenekisi  has the primary responsibility of keeping the families in constant unity.

The Lega do not have any kind of centralized authority, but instead submit to the authority of a communal organization called the Bwami Society. This organization provides the political, social, and religious structure for Lega to govern themselves. Male and female members, called Bwami, voluntarily join the society at its lowest level; they all devote their lives to learning new skills, increasing their knowledge, and perfecting their character through a series of initiatory rites. The ultimate goal of all members in this lifelong educartion al process is to reach the Kindi, or the highest level of recognition and prestige. At this level, one becomes a moral authority and leader.

Initiations are performed by elders of clans. These initiations include proverbs, visual arts, music, dances, tests, and the telling of stories and myths.

The Lega people traditionally live in small village groups, with no central authority. Within a community, a chief inherits his position on a patrilineal basis, and his close relatives have highest rank. Counterbalancing this hereditary structure, the Bwami society also regulates social and political life. This society has seven levels for men and four for women and is open to all. An initiate advances through the ranks through a complex system of instruction, payment and initiation, achieving increasing status. A member of the highest level is recognized as a Kindi, a social leader with great moral authority.

The Lega people are polytheistic. Their gods include Kalaga, the promiser; Kenkunga, the reassembler; Ombe, the hidden; Kaginga, the incarnation of evil. Kaginga assists sorcerers, but Bwami membership can protect an individual against the evil doings of witches.

The Lega people originated in what is today Uganda and started to migrate from there to their present location in the 16th century. They were fierce warriors, conquering the people whose territory they entered and imposing many of their customs. By the mid-1800s the Lega were surrounded by Arab / Swahili slave posts. Although none of these posts was within the Lega territory, they were constantly threatened by slave raids. For most of the period of the Congo Free State, the Lega territory was within the area that Tippu Tip and his successors had reserved. For a period two Arab agents of the Free State, Munie Chabodu and Munie Mtoro ruled the Lega and collected tribute in the form of rubber and ivory. They established towns at Micici on the Elila, Shabunda on the Ulindi, and Mulungu in the mountains.

During the 1890s the Belgians fought a series of campaigns in which they drove away from the Arab slavers, and established government posts near Micici and Shabunda. They did not fully occupy the territory until the 1900s. They organized the Lega into chiefdoms, sectors, and territories, changes that were neither resisted nor welcomed by the Lega. Catholic missionaries arrived in the 1910s and the first Protestant mission was founded in 1922 in Shabunda. Mining began in eastern Legaland in 1923, with further mines opened in the 1930s, employing many young Lega. Often they took a job only for a short period to earn enough money for some purpose such as Bwami initiation or marriage.

In 1933 the Belgian authorities banned Bwami, and they prohibited the society again in 1948. The Bwami continued underground and was officially recognized again in 1958, but by then much of the tradition of art production had been lost. Zaire became independent in 1960. The regime of Mobutu Sese Seko was harsh and corrupt, and Mobutu was eventually ousted in the First Congo War (1996-1997). This was soon followed by the Second Congo War (1998-2003) in which rebels attempted to throw out his successor, Laurent-Désiré Kabila. The Lega territory was the scene of many violent conflicts during this period.

The Lega are not organized under one centralized authority. Instead, individual communities are stratified in accordance with lineage hierarchies. The leader of the lineage inherits his position along patrilineal lines. This system is balanced by the Bwami society, which is theoretically open to all Lega, and involves movement through numerous hierarchical stages. One's power in the community is often determined by one's power in Bwami. The demand for high payment that is made for movement through Bwami often acts to challenge the lineage power structure.

The main gods are Kalaga, the promiser; Kenkunga, the reassembler; and Ombe, the hidden. Kaginga is recognized as the incarnation of evil and assists sorcerers. By joining Bwami one can develop an immunity to the evil doings of most witches. The highest rank of Bwami is Kindi and is directly associated with the skulls of the ancestors, which are placed in a hut at the center of the village. Objects which contain powerful supernatural medicines are not exposed to public eye but are instead placed with the Kindi.

The Lega traditionally lived by hunting and gathering, exploiting the rich resources of the forest. When possible, they roast their food. The women are in charge of cooking. If it is not raining they will cook outside on a hearth formed from slow-burning logs that support a pot over the fire. In poor weather they cook in kitchens within the long houses. The men eat as a group in the men's house, and the women eat with the young children in or outside the kitchen.

The Lega villagers were forced by the colonial administration to produce manioc, bananas, and rice to feed the miners, causing considerable disruption to their lifestyle. In more recent years the Lega have taken to panning for gold in the rivers and working in the iron ore mines of the region.

Art is of crucial importance to the Lega, as it is primarily through works of art that wisdom is communicated to initiates. Today, the Lega are recognized internationally for their masks and sculptures. These objects are made to show the initiate’s rank and knowledge of Bwami secrets. They also are used to help elders share their life lessons with new generations.

Bwami masks and figures are symbols of the owner's rank within the Bwami society. The objects represent moral or social values, and are used during initiation rites. The Bwami works of art are often associated with proverbs, and these proverbs in conjunction with dance, poetry and song give wisdom to members of the society. Beauty, knowledge and power are intertwined.

Some artwork can only be seen, handled or owned by the highest grades of the society. The objects are typically small and simple in form, and have a striking patina that derives from being handled or worn on the body. Ivory objects usually have russet or yellow patinas. The masks are fairly standardized, although the most important masks with special ritual use or symbolic meaning may have distinctive design. A typical mask will have a concave heart-shaped face. The forehead protrudes slightly, the nose is narrow, eyes are slits and the mouth is slightly open. Every time a mask is used it is rubbed with white clay, over time acquiring a white patina. 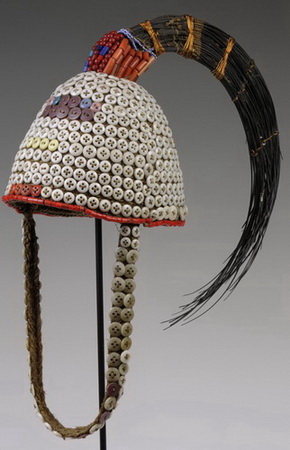