They traced to their matrilineal side , Kwere homeland streches from Bagamoyo to the wami river on the north and westward to Msata which connect to Dar es Salaam and Arusha. Kwere are one of Tanzania’s minority ethnic group , It is believed Kwere People settled Inland from the coast and maintained the trading ties with Zaramo , Zigua and Luguru People .

In 1987, the Kwere population was estimated to number 98,000. The government of Tanzania released data for the 2012 census, but it was not by ethnic group and such detail may not be published in the near future. In the country's 1967 population census, 48,132 people on the mainland identified themselves as belonging to the Ngh’wele ethnic group. The overwhelming majority of them lived in their traditional residential areas in Bagamoyo district (35,404 people), with another 3,857 people living in neighboring Kisarawe district. In addition, small groups of Ngh’wele people were said to be residents of the Morogoro Region (3,764) and Dar es Salaam (2,902). Reliable census data since 1967 are not available, as subsequent government demographic collections no longer record ethnicity.

The total population of the Pwani Region for 2012 was 1,098,668. In the past, the overwhelming majority of the Kwere lived in their traditional residential areas in Bagamoyo district on the coast.

Kwere are hoe cultivators, raising maize, rice, and millet as staples. Goats, sheep, chickens, and guinea fowl are also raised. Some cattle are now kept, although this was impossible earlier in their history, since the tsetse fly was once endemic. Some fishing is practiced, though for the most part Kwere farmers trade with Swahili fishermen. Near the coast the climate is tropical, and there are plenty of fruit trees and coconut trees which provide ample food sources. Tobacco, cotton, and sisal were raised for purposes of trade. At one time, Tanzania was the largest exporter of sisal, and this commodity, which is used to make ropes, was the greatest contributer to the Tanzanian economy. As synthetic alternatives have become less expensive, however, Tanzania has seen the bottom drop out of the sisal market.

Kwere did not have centralized political systems. Their social organization was based on small-scale, self-governing matrilineal kin groups. Lineage heads were chosen by community leaders. These leaders held the land rights of the lineage. Land ownership was determined by the original members who inhabited it. The leader was responsible for distributing the land and maintaining lineage rituals. Most of the leaders in Kwere communities were men, but on occasion they could be women. They settled disputes between family members and were often attributed with spiritual powers, such as the ability to make rain or to communicate with the spirit world.

Most Kwere believed in Mulungu (a supreme god), who was associated with rainfall. Most prayers were directed to familial spirits. Religion among the Kwere was a household affair. Every family was responsible for appeasing its ancestral spirits. Shrines were built to the spirits on the ancestral homeland, and members of the family were expected to journey to these sites to make the proper offerings. Kwere believed that major disasters and illnesses were sent by Mulungu, but appeals and prayers must be made to the ancestral spirits who served as a liaison between living men and the god. In order to determine the proper course of action necessary to appease an offended spirit, a mganga (spirit medium) would be consulted. Through various divination techniques the mganga would communicate with the spirits and then prescribe treatment for an illness or social imbalance.

The pervasive dominance of the Swahili language in coastal affairs throughout East Africa for many centuries have led to most peoples indigenous in the area to be at least bilingual, the Ngh'were are no different. This was confirmed in 2002 by Bagamoyo elders who attended a conference held in the city championing its nomination as a UNESCO World Heritage site. Recently, Bagamoyo was reported as the recipient of Tanzania’s seventh world heritage site. What impact this award will have on Ngh'were residency in the city is not yet known, but the tour handlers are advertising globally.

They celebrate festivals such as Arts festivals which include traditional dances, sculptures and music, Yam festival and other kinds of festivals .

In their Culture, members of the extended family are held responsible for the welfare of the younger siblings and oral folklores is part of their tradition , basket weaving , pottery, and musical instruments as well .

Kwere traditional beer is made up of sorghum , honey , yeast and water it plays a role during customary weddings, funerals and Initiations .

Many need it for physical thirst and spiritual thirst and stylised wood symbol carved by the Kwere People of Tanzania and It is has a striking traditional hairstyle , used in symbolic purpose and executed carving work on a small scale.

Mwana hiti Sculpture is carved from a three- legged chair with a high backrest and single piece . Both Antelope horns and Calabash medicine is used for storing medicines, sacred oils, mask larger sculptures and they are combined with feathers and carved heads that represent their ancient ancestral connections. Kweere Pole is a carved sculpture is used as Initiation ceremonial symbol for girls marking the transition from childhood to womanhood and Mwana hiti means a female child of the one who is enthroned undergoing Initiation. 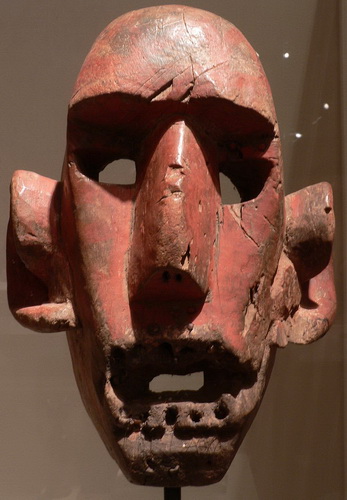