The Krahn are an ethnic group of Liberia and Ivory Coast. This group belongs to the Kru language family and its people are sometimes referred to as the Wee, Guéré, Sapo, or Wobe. It is likely that Western contact with the Kru language is the primary reason for the development of these different names

In Ivory Coast, the Krahn or Guere people lives in the coastal area sharing four major Rivers: the Cestos, Sanquine, Sino and Cavalla. The Krahn in Liberia were originally hunters, farmers, and fishermen, traditionally focusing on rice and cassava production.

The land in this region has faced developmental setbacks and as a result, many of the younger Krahn generations have migrated to areas such as Monrovia. The Wee in Côte d'Ivoire, also traditionally became hunters, farmers, and fishermen, but they tended to focus more heavily on crops such as “rice, yams, taro, manioc, maize, and bananas.” Like the Krahn in Liberia, the Wee traditions of hunting and farming have faced some difficulties, and in more recent years many have instead begun laboring in diamond camps and on rubber plantations. 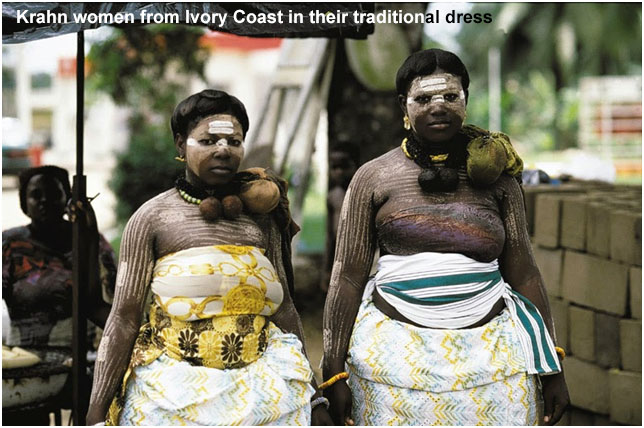 Krahn people speak Krahn or Guere; one of the Kru languages which belongs to the Niger–Congo language family. Although many Kru-speaking tribes have adopted English as their second language, recent studies have shown that Kru is still spoken by many Liberians. Within the Kru language there are several subcategories, with Eastern and Western Kru offering the first significant division of tribal language breakdowns. This Kru language chart clearly shows that Krahn falls under the Western Kru, Wee subgroup. Some scholars further denote a difference between Eastern and Western Krahn, with Eastern variations typically spoken in northeast Liberia and Western Krahn spoken throughout Grand Gedeh County and Côte d'Ivoire. As of 1993, there were approximately 47,000 Eastern Krahn speakers within Liberia, with an additional 47,800 Western Krahn speakers in Liberia and 12,200 in Côte d'Ivoire

The second is the northern Krahn of today and Wobe who live together in the town of Man in Ivory Coast and are considered hunters. The last group is the Eastern Krahn and Sapo who came from the East. All the Eastern Krahn tribes- Gbarzon, Gbargbo, Nyezon, Marbo, Borbo, Tchien, Niabo, Kenna, Glio and Twabo- once lived together in Nyaya, northeast of Sassandra River in Ivory Coast.

The first group to leave their home of origin was Sapo. They reached the Cavalla River between 1750 and 1760, and crossed the River around 1790. When the northern Krahn crossed the Cestos river they met Gio few miles west of Cestos.'

Krahn settlements consist of a small number of mud huts with cone-shaped roofs made of palm leaves or thatch. These huts are grouped irregularly around a center court that serves as a meeting place. In a particular locality, a clan composed of a local lineage dominates. Many settlements are actually an extended family acting as an economic unit.

Krahn are well-know agro-fishery people. They are assumed to be farmers who grow millet, sorghum, and other crops. Crop rotation and some irrigation are used, and small numbers of cattle and other animals are kept. Hunting, fishing, and gathering wild plants provide additional food.

Early Krahn political organization was traditionally decentralized in both Liberia and Côte d'Ivoire. The tribes often lacked a central governing power, instead turning to a village “headman” who rose to a position of social esteem through skill, hard work, and luck in hunting and farming. These individuals often formed councils consisting of young warriors for protection and village elders to serve as consultants in village affairs. This governing group would broker trades with neighboring tribes, as well as make important decisions for the tribe members. Within these tribal groups, it was not uncommon for ceremonial face masks to serve dual roles in rituals and politics. These masks were often modeled after fearsome animals and were utilized in community mediations. They may also have been a means of implementing social control in the years prior to adoption of Western laws during the colonial period.

Krahn men have more than one wife, and the levirate (compulsory marriage of a widow to her dead husband's brother) and the sororate (compulsory marriage of a woman to her dead or barren sister's husband) are practiced. Most girls are betrothed while they are quite young. Marriages are arranged by either the father or the extended family head. When a man marries, his bride may join him or remain in her father's home. If she remains with her father, her daughters stay with her, but her sons join their fathers at a young age.

Society is patrilineal, with lines of descent and inheritances traced through the males. Private property is passed to the eldest son, and household property, to the father's younger brother. Married sons live in the household of their fathers.

Although scholars are not certain of their origins and intended use, some sources believe that the Kru saw these objects as living entities typically found in small bodies of water such as rivers and creeks. Called ‘tien’,‘nitien’ or ‘Dwin,’ these artifacts would have been viewed as water spirits or ‘Gods of water.’ Additionally, it is believed that powers associated with these beings included healing, fertility, and the ability to end conflict and create new villages.

The Kru also thought that a town or village could gain protection from one of these water guardians if they were caught in the water and carried into town.

According to the Wee of Côte d'Ivoire, it is also believed that the natural world is made up of spirits, referred to as “bush spirits.” These spirits are part of the world untouched by man, and the Wee believe that keeping these spirits appeased is vital to the health of the tribe. Whenever new land requires cultivating for fields or expansion, or when tribesmen needed to venture outside the village, it becomes necessary to make offerings to the spirits, with such endeavors being surrounded by an air of danger. It is further believed that the bush spirits take corporeal form in order to interact with the villagers and participate in ceremonies.

During the late 1970s Liberia faced a heated civil war in which opposition to the Americo-Liberian and Tolbert government, led to a military coup, organized in part by indigenous tribal members. The culmination of this coup came on April 12, 1980 when Krahn leader, Master Sergeant Samuel Kanyon Doe seized control, becoming the new head of state. With a Krahn leader serving as a key political figure, the once disparaged and “uncivilized” Krahn were now given a place of honor within Liberia’s governing body. This rise in status led to many Krahn speakers moving from coastal and inland areas to the capital, Monrovia. In time, Doe began showing favoritism to the Krahn, particularly to those from his own tribal group. These measures included appointing members of the Krahn’s ethnic kin in Côte d'Ivoire, known more commonly as the Wee, to the Executive Mansion Guard, as well as taking steps to prevent non-Krahn individuals from reaching key government positions.

By 1985 Doe’s fierce response to his opposition created a large contingent of “anti-Doe” supporters. In December 1989, exiles and local recruits began organizing military groups, resulting in another civil war, this time against Doe and his Krahn supporters. As this war progressed, the National Patriotic Front of Liberia (NPFL) began attacking Krahn civilians in Nimba and Grand Gedeh Counties, destroying entire communities as they moved through the country. By mid-1990, the war had escalated, prompting foreign intervention. Unfortunately for Doe, this intervention was not to play in his favor, culminating in his kidnap and execution by opposition forces. Following the removal of the Samuel Doe regime, and the continuation of the civil war, Krahn refugees began fleeing from Liberia to Côte d'Ivoire, some taking the Krahn language with them.

Although Doe was removed from power in 1990, the civil war did not officially reach its end until 1996, at which time Charles Taylor ran for presidency, winning the 1997 general election amidst much controversy. This presidency was not well received by all groups however, and in 2003, members of the Krahn tribe founded a rebel group, the Movement for Democracy in Liberia (MODEL), as a means of fighting a war against Taylor. The group has since promised to disband as part of its initial peace agreement.

Today Liberia’s government is far more stable, which has in turn allowed the Krahn to resettle throughout the nation. Present day Krahn are typically found within Nimba, and the Grand Gedeh and Sinoe Counties, as well as Côte d'Ivoire.