The Kassena people are an ethnic group located along the northern Ghana and Burkina Faso border. They speak the Kasem language. Their chief lives in the town of Tiébélé. The kasenna are closely related to the people of Nankanni and were brought together to form the Kassena-Nankana administrative district in 1936. As of 2008 the (Kassena-Nankana) area comprises two districts: Kassena Nankana West and Kassena Nankana East.

The Kassena people are part of the greater Gurunsi group and were separated from the Gurunsi ethnic group at the beginning of the 20th century, as a consequence of colonialism and more specifically of the partitioning of the Burkina Faso-Ghana area between France and United Kingdom. As most of the Gurunsi people live in Burkina, the Kassena were isolated and gradually developed an independent cultural identity. Kassena mostly live on agriculture, growing millet, sorghum, yam and, to a lesser extent, maize, rice, groundnuts, beans. During the dry season they also hunt and fish.

Traditional Kassena society is grouped into chiefdoms, five of whom are predominant:Navrongo, Paga, Chiana, Kayoro, Katiu and Nakon.

Kassena are primarily sedentary farmers, growing millet, sorghum, and yams. Maize, rice, peanuts, and beans are grown in addition to these staples. Farmers throughout the region practice slash and burn farming, using keri (fields) for approximately seven or eight years before they are allowed to lie fallow for at least a decade. In the family fields close to the villages, women grow cash crops, including sesame and tobacco, which are sold in local markets. Men participate in hunting during the long dry season. This is important for ritual reasons, since it is during this time that men may interact with the spirits that inhabit the bush. During the dry season, when food supplies are running low, some fishing is practiced in local swamps.

Kassena societies are comprised mainly of farmers without social or political stratification. They are not divided among occupational castes or groups since most of them simply till the land and engage in occasional hunting. They had no internal system of chiefs, and all important decisions were made by a council of elders consisting of the oldest members of each of the village lineages. Religious leaders maintain some political authority, determining the agricultural cycle and parceling out land for cultivation.

Belief in a supreme creator being is central to Kassena beliefs. A shrine to this god occupies the center of every village. An element of this creator god is Su, the mask spirit which is enshrined in the oldest and most sacred mask in the community. The spirit of Su can be harnessed to benefit the community or to cause harm to their enemies. When Su is properly appeased communal harmony is achieved. He is responsible for human fertility and is recognized for his role in the continuity of life. Each extended family maintains its own hut, in which the lineage magical objects are kept. The objects allow the family to maintain contact with the vital forces of nature. These objects are the communal property of the lineage, providing protection and social cohesion among all members of the family.

The most recognized of the Kassena art forms are magnificent wooden masks. In addition anthropomorphic figures sculpted from clay and wood and various personal objects, ranging from jewelry to wooden stools, are created to honor the spirits. Kassena build spectacular adobe homes.

Traditional African architecture is generally associated with round mud huts and thatched roofs. In reality, African vernacular architecture is very diverse with each ethnic group having their own construction methods and designs. One of the most beautiful examples of African vernacular architecture is that of the Kassena ethnic group of southern Burkina Faso. Ever since the 16th century, the Kassena have been decorating the walls of their houses with elaborately painted murals. The painting is done exclusively by the women who pass on the skill to their daughters. The Kassena are part of the larger Gurunsi tribe who also paint houses in northern Ghana. 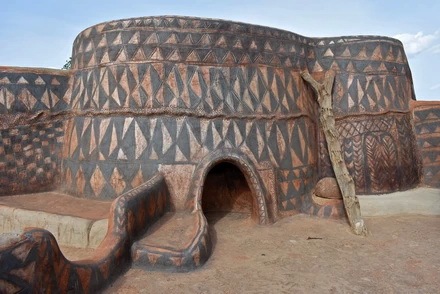 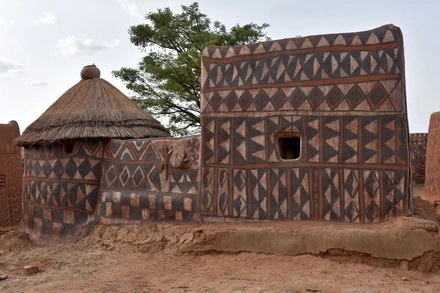 Defensive earth compounds of the Kassena

Defense against enemies is a central feature guiding the design of Kassena dwellings. Houses are clustered into walled compounds with each compound housing an extended family. The most famous is the Royal Cour de Tiébélé, the home of the community chief. Compounds are built far away from each other so that there is somewhere safe to escape if one falls in the hands of enemies.

Even inside the compound houses are built with defense in mind. Doors are small, especially those in the houses of elders, which prevents enemies from seeing or charging inside. Small doors and near lack of windows also help keep the houses cool in the hot climate.

Kassena houses come in different shapes and the shape reflects the social status of the occupants. Square houses are for families, circular ones for bachelors and figure-eight shaped houses for grandparents. Each compound also has grain stores and altars dedicated to the ancestors, while some of the houses in the compound are actually mausoleums for the dead. Cooking is generally done outside and so kitchens are small and simple.

The buildings are made completely from locally available natural materials. The main construction material is clay, and straw and cow dung are mixed in to make the clay stronger. The walls were traditionally shaped by hand but today molded adobe bricks are common. The walls are thick and their thermal mass helps keep the houses cool during the hot days and warm during cold nights. Modern Kassena houses often have a stone foundation. Even the furniture (shelves, chairs, beds) is often made of clay.

Roofs are flat and built with wood and earth. Mud is laid on top of a wooden structure and then a layer of dry laterite is applied on top. The laterite and mud are compacted with a stick and after this another layer of mud mixed with cow dung is added. This method makes the roofs resistant to rain, although the roofs need to be replastered every five years or so. Roofs are used for drying grains and for sleeping in hot weather. 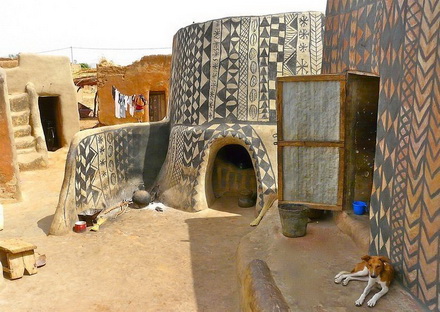 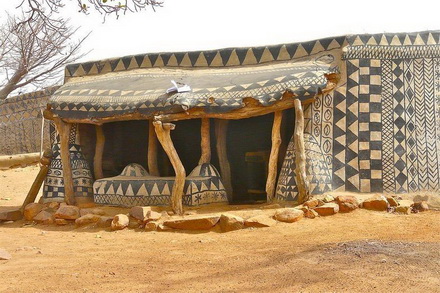 The Kassena are skilled potters and this skill is reflected in their sculptural buildings. The most spectacular feature of Kassena architecture is the elaborate murals that decorate each house. While construction is considered to be the men’s work, the decoration is done solely by the Kassena women, who do the work in groups. Women pass on the skill to their daughters and the tradition dates back all the way to the 16th century.

The paints are made from locally found minerals: white from chalk, black from basalt and red from laterite. The minerals are mixed with water and clay to make the paint. After painting, the wall is polished with small stones and varnished with a natural varnish made from the local néré fruit. This finish protects both the paint and the house, but every few years the painting needs to be redone, usually after harvesting and before the rainy season.

Each house is uniquely decorated with a mix of geometrical patterns, illustrative drawings and bas-reliefs, all full of symbolism. Some of the murals tell stories of Kassena folklore and beliefs while others are drawn from everyday life. Common motifs include triangular shreds of pottery, fishing nets and animals such as sacred crocodiles and protective snakes. The paintings turn each house into a canvas that tells a story of the life of the Kassena people.