Kapsiki (Ka-Tsepkye) is a people living on both sides of the border between North Cameroon and Northeast Nieria. They are called Kapsiki in Cameroon, and Kamwe (Higi) in Nigeria. Together they amount to about 132,000 people. Their language, Psekiye or Kamwe, consists of eleven dialects including Nkafa, Sina, Ghye, Humsi, Dakwa and Tilli and belongs to the Chadic language family.

The mountain region has a kaleidoscope of local cultures. The Kapsiki live in villages of 2000-6000 people, and subsist on livestock farming, agriculture and - in the village of Rumsiki in particular - on tourism.

Their primary language is Psikye. The primary religion practiced by the Kapsiki is Islam, a monotheistic religion built around the teachings of the Qur'an and of the prophet Muhammad. 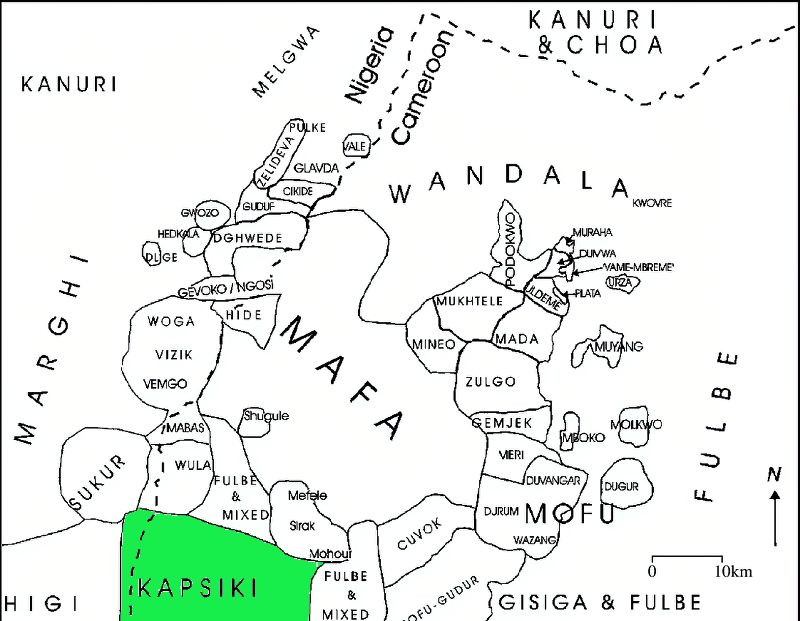 According to van Beek(1981:111) the Kapsiki and Higi need to be seen as one ethnic group, which is called Kapsiki in Cameroon and Higi in Nigeria, whereas he prefers to refer to the Kapsiki/Higi only as Kapsiki. Van Beek (1987:11) informs us that “the name Kapsiki means ‘to sprout’ the sorghum grains for beer making. Barreteau (1984:170) says that the prefix ‘ka’ serves as plural in order to form an ethnonym for the psikyei speakers: Ka-psiki. Wente-Lukas (1985:157) explains that “Higi’ is a Margi word meaning ‘aboriginals’ (Meek 1931:262) or ‘locust’ (Mohrlang 1972:6). Wente-Lukas (ibid) claims that the autonyms are ‘Kamun’ (Meek, ibid) or ‘Kamwe’ (Hoffmann 1976:189), and that ‘Kapsuku’ (Smith 1969:1) is a Fulbe expression meaning ‘those who make beer’, whereas ‘Kapsiki’ is a europeanized version of ‘Kapseke’ (Mohrlang, ibid), which is the name of the major Higi dialect group in Cameroon.

The Kapsiki of Cameroon live on the central plateau about 900m high south of Mokolo, connecting the Northern Mandaras and the Southern Mandaras. A prominent feature of the geography of this area of the plateau are the picturesque volcanic remains visible from far. Main settlements of the Kapsiki of Cameroon are Mogode and the mountain Kamale. Other important settlements are Roumsiki, Sir, Roumzou, Ourya and Amas. The Kapsiki live mainly in the canton Mogode, arrondissement Mokolo. The Higi of Nigeria live mainly in the Michika area (Adamawa State). Main mountain settlements are Bazza and Mukulu.

Van Beek (1981:113 ) is of the opinion that the Kapsiki and Higi form one ethnic group, and adds (1987:vii) that they are usually considered as two separate ethnic units. Van Beek (1985:4) explains that autonomous villages make up the backbone of Kapsiki territorial organisation. Van Beek (1981:133ff) points out that according to their traditions of origin Kapsiki villages are divided into two groups. One group of 16 villages claims to originate from the west, while a group of 18 villages claims to originate from the east. While the group of villages of western origin cannot say from which place they came, the group of eastern origin say that they came from Gudur (see Mofu-Gudur). Some of the villages of Gudur tradition have close links with Sukur and Wula. Van Beek (1987:10f) writes that the Kapsiki have no sense of ethnic unity or ethnic loyalty. They are culturally closely related to the Bana and Hina, but are quite different from the Margi in the west, the Sukur in the north, and the Mafa and Mofu in the northeast (ibid). The Kapsiki-Higi are the most southern ethnic group of the area which is referred to in this website by Muller- Kosack as the Northern Mandaras.

Strumpell (1922:56) mentions the ‘Hidji’ (Higi) and refers to the Gudur tradition of the Kapsiki. Most important literature is van Beek who published extensively on all aspects of Kapsiki ethnography since 1975. Early articles dealing with the Kapsiki are by Grall (1936) and Jest (1956). Also Lembezat (1950) deals already with the Kapsiki. Otterbein ((1969) wrote ethnographic articles on the Higi. Smith (1969) wrote a PhD on the Kapsiki language. Hoffmann (1966) publish ed an article on the Kapsiki language, and Mohrlang (1972) published on Higi phonology. Guiscafre (1961) published about river erosion on the Kapsiki plateau. Dineur and Thus (1986) and Ducos (1998) wrote zoological articles on Kapsiki taurine races.