30.000 Kachipo live in the Boma plateau of south-eastern Upper Nile bordering the Murle, the Jiye and the Anyuak (South Sudan). They extend into Ethiopia, where their tribal headquarters is at Koma. The Kachipo country is hilly with deep valleys. The climate is mild with heavy rainfall. 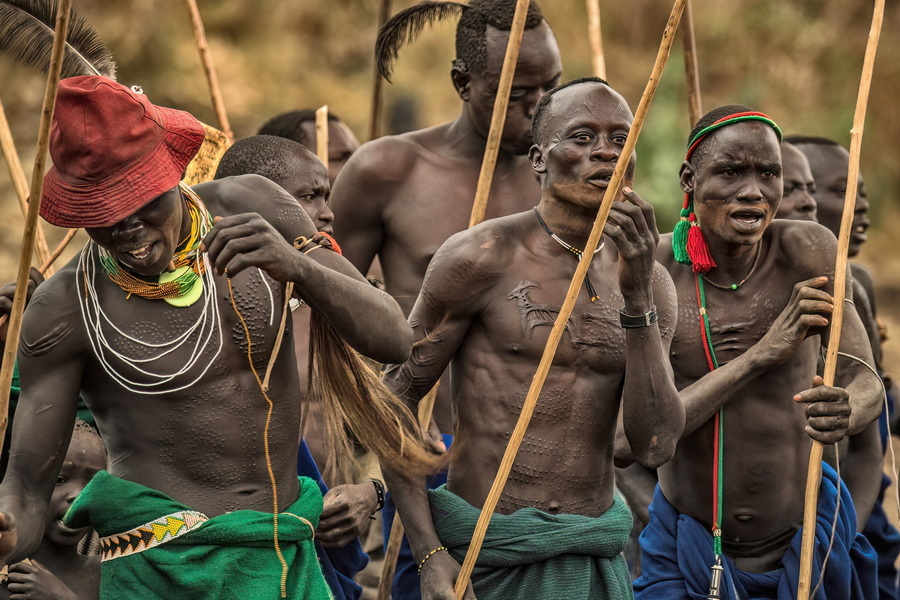 Administratively, they occupy Meoun Payam of Pibor County. The Suri relate linguistically, culturally and in appearance to the Tirma (Ethiopia). They however acknowledge no blood affinity with any other tribe in the area. 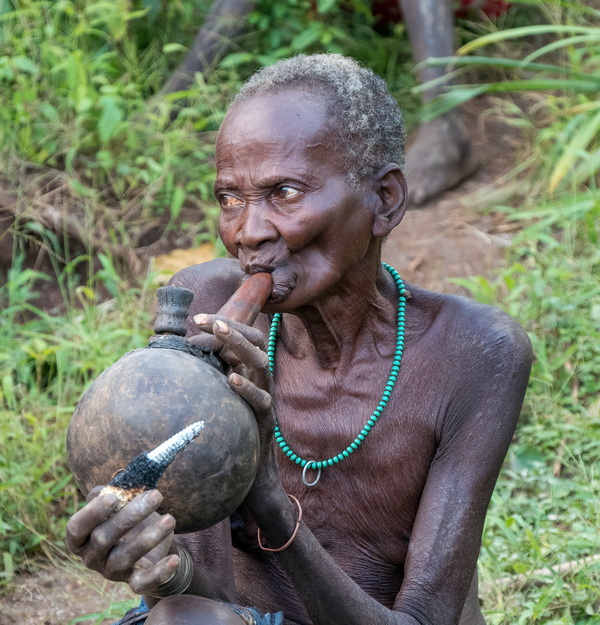 The Suri country is hilly with deep valleys. The climate is mild with heavy rainfall. The Suri are predominantly sedentary, agrarian community with the economy built on agriculture. The rich fertile soil results in a remarkable size and quantity of crops. Crops planted are millet, maize, cabbage, marrow, beans, yams, tobacco and coffee. They keep goats and sheep. They also hunt large game and collect honey during the dry season. They pan gold in the streams and make pots. They engage in trade with the Jiye, the Murle and the Ethiopian highlanders in tobacco and pots (Jiye and Murle), lion and leopard skins, giraffe tails, honey and ivory, rifles and ammunitions (Amhara and Shangalla)

The Suri believe that they originally lived on the banks of the Nile, in the country now inhabited by the Bor Dinka. It is said that they then migrated eastwards towards the Akobo. From here, the Meyun clan broke off from the main body of the tribe, coming south to Boma, and subsequently taking up their abode at Meyun. The rest of the tribe crossed the border, making their way southwards, and finally settling at Koma. The Suri have been continually harassed at Koma by the Amhara, Ghimira, Tirma, and other tribes. This forced large numbers of Suri to join the Meoun clan at Meyun in about 1890. They were shortly afterwards settled on Boma plateau in about 1925. 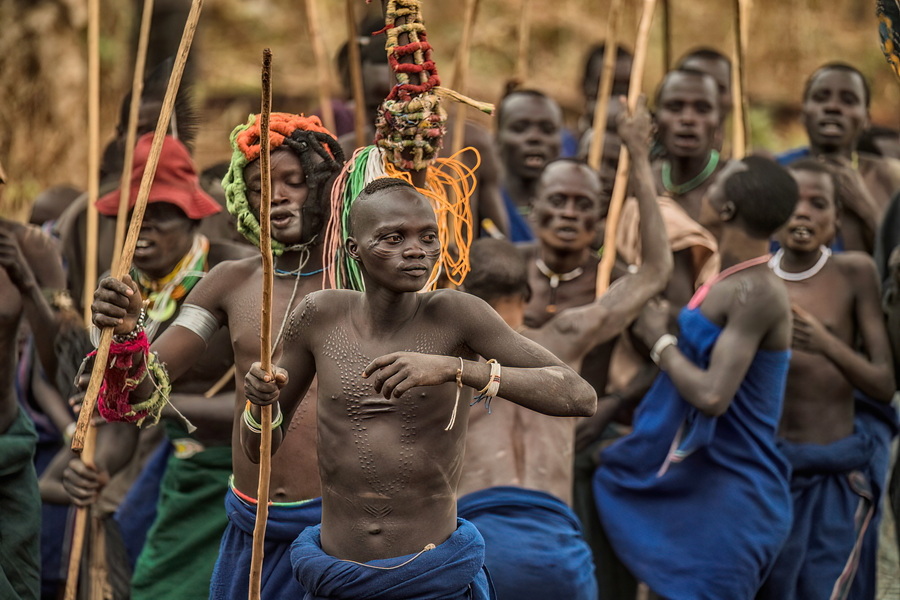 The Suri speak a language that is close to Tirma in Ethiopia.

The Suri society is made up of six exogamous clans namely: Jufa; Meyun; Beela; Kembo; Durugan and Baale, with the Jufa being most dominant. 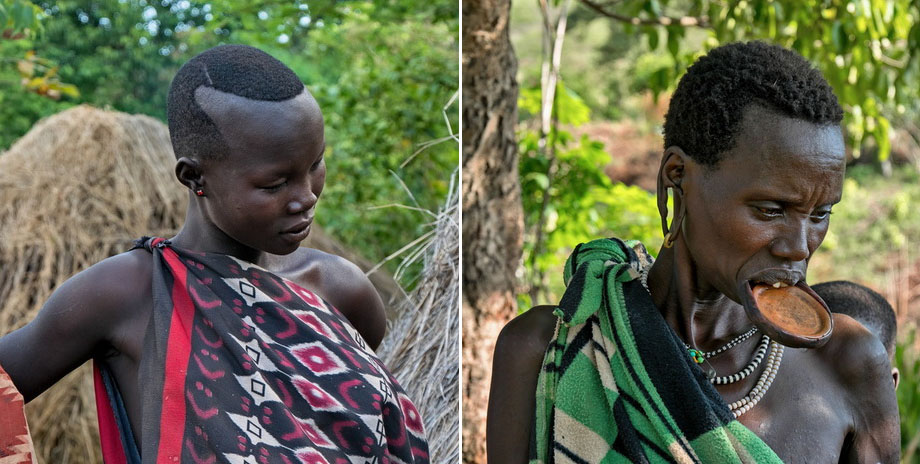 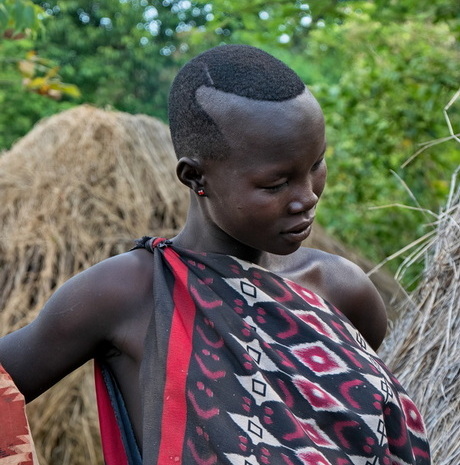 Marriage among the Suri is performed, like in many other groups, among people who have no blood relations. The bridegroom collects and pays dowry in form of gold dusts and nuggets, tobacco, goats and sheep. Divorce among the Suri is said to be difficult.

Cicatrisation is common but is not universal. It is performed according to taste, but is usually not extensive. The deliberate creation of keloids is not practised. Both sexes practise the boring and stretching of the ear-lobes. The result does not usually exceed three inches in length.

The practice of piercing and stretching the lower lip is universal amongst the women, and is performed at puberty or a little before or after. It is considered a sign of beauty, and the bride price payable is proportionately greater. The practice is said to have been learned from the south – may be from the Kikuyu – or the Maasai.

The Suri practice age-set system, which are fighting sets. Each of the fighting sets is held in considerable respect by those junior to it. If this is not shown, the offending set is severely beaten by their seniors. Initiation ceremonies are held at intervals of about 10 years. They are held on village basis but all ceremonies take place on one day. In each village a sheep is suffocated to death, and its dung is smeared on the bodies of the initiates.

The ‘Gonarabi’, the spiritual head of the Jufa clan and recognized as temporal head of the Suri, lives at Koma. The clans have sub-chiefs whose realm is not administrative but spiritual. The clan chiefs are recognised through symbols or emblems namely an ivory horn, blown in times of sickness; a drum beaten to announce death; and a set of fire-sticks for producing fire on certain occasions e.g. beginning of the hunting season. The duties of the temporal chiefs consist of leading their villages in times of war and peace, judging cases, etc.

The Suri believe in the existence of a supreme being – God. They also believe in the existence of spirits and undertake prayers and sacrifices to God and spirits either directly through a medium in times of personal and community calamity. The Suri have only one rainmaker, and the office is hereditary. Should his services be required, chips from a certain tree are masticated, and the resulting juice is mixed with clay and smeared over a man’s body. Rain may be expected to fall. The same effect may be obtained locally by dipping a stick of the same tree in water and throwing the latter upwards.

The Suri dance is performed by separately by each sex ,with the other forming a ring round the dancers. The men dance to the tune of the drums. The women on the other hand, dance to their own singing and the sound made by their hand slapping their skin ‘skirts’ with the palms of their hands.

The Suri neighbour Murle to the west; the Anyuak to the north; the Toposa and Jiye to the south; the Amhara, Ghimira, Tirma and other Ethiopian groups to the east. The Suri have had bad relations with their neighbours who continuously harassed and raided them until 1936 when the Boma plateau was militarily occupied. The Suri, however, have had good relations with the Jiye and the Shangalla.

The Suri have been completely neglected and marginalised. Their participation in the social, economic and political life in South Sudan has been nil. The war could have been a blessing in disguise, as the Suri got connected to the rest of South Sudan and their children now go to a school run by the Diocese of Torit in upper Boma. Many of them have also converted to Christianity and modernity is slowly influencing the Suri.