The word 'Jola' is the Mandinka name for this ethnic group and means 'payback', since Jolas are renowned for doing back what's been done to them, be it a good or a bad deed. The name of the Jola tribe in their own language is Ajamat (singular) or Ajamataw (plural). 'Diola' is the traditional transliteration in French, which is also very common in English sources.

The Jola speak the Jola language, which is divided into a variety of dialects which may not, at times, be mutually intelligible. These dialects correspond to the different Jola tribes:

Most Jolas continue to follow their traditional religion and rituals in spite of the influence of Islam and Christianity in recent times. Even though some accepted Islam after the Soninke-Marabout war, they honour the traditional use of palm wine in their rituals. They have one God that they associate with the natural phenomena like sky, rain, and the year, Emit or Ata Emit, literally, "To Whom Belongs The Universe" or "The Master-Owner Of The Universe". They have charms and sacred precincts that they honour and with which they communicate (but do not worship). The Jola people believe that spirits called Bakin or Eneerti (Mandinka Jalang) can protect their families, their villages, and their rice fields; and can even protect them from conversion to Islam and Christianity.

Before the influence of Islam and Christianity in their ways of beliefs, all Jolas placed great respect in the proper observation of funeral ceremony, and still today some do, for they are of the belief that it enables the dead person's soul to go to its final destination to join his or her ancestors. It was and still is strongly accepted by those Jolas who still practice their ancestral religion that without performing these funeral sacred rites, the soul is prevented from entering the presence of the creator (Ata Amit), and the ancestors. Jolas believed strongly in living a good humanistic life in this world. They believe that if one lives a bad life in this world, when the person dies the soul of the dead person is punished to become an exile spirit with no bed to lie on. In the Jola Cassa subgroup this exile spirit is called a Holowa. This exile spirit becomes a roaming spirit with no respect from the other spirits.

Some Jola religious festivals include the Samay, Kumpo and Niasse.

Unlike most ethnic groups of the Senegambian region, the Jola do not have caste system of Jewels griots, slaves, nobility, leather workers, etc. Their communities are based on extended clan settlements normally large enough to be given independent names, including the: 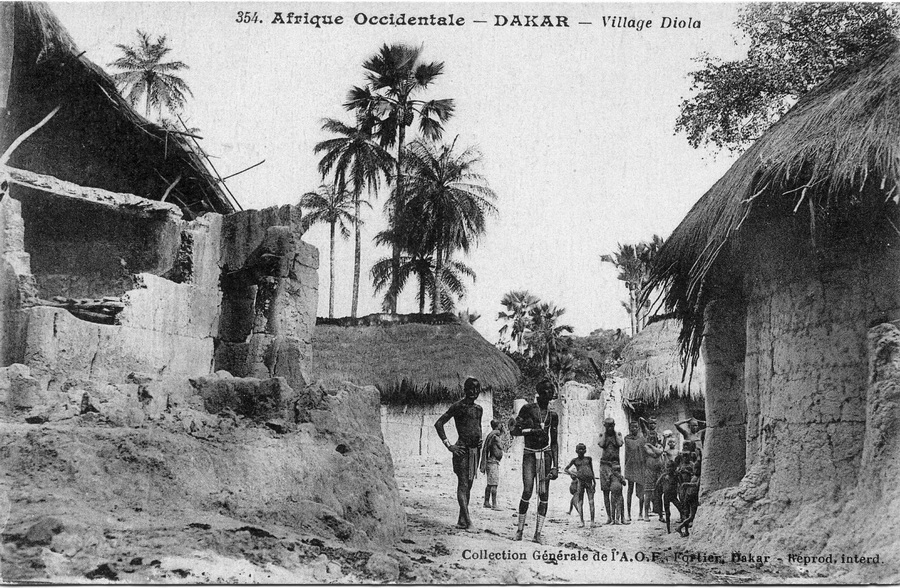 Like some of the other the indigenous ethnic groups of the Senegambian region—the Baga, the Balanta, the Konyagi, etc.—, the Jola ethnic group did not develop a political scale that expanded beyond village level compared to ethnic groups that migrated to the region like the Sonike and the Mandinka. But this does not mean they did not develop a sophisticated political system. The egalitarian nature of their societies (rare in most societies), structured around the limited village environment gave them the possibilities to develop a political system based on collective consciousness, which they worked through their initiation rites. In a sense the Jolas' political achievement in the village was socialism. It was totally tied to their religious belief in the Bakin. This political achievement is not easy to reach if the society that runs it does not have well-defined rules of administration and penalties. Jolas have many traditional economic activities like fishing, farming groundnuts, tapping palm wine, and processing palm oil: their most intensive economic activity is rice cultivation, which is tied closely to their religion and social organization. Jolas are also palm oil manufacturers and palm wine tappers in the Senegambian region. They farm cows, pigs, goats, chickens, sheep and ducks. Jola crafts include basket weaving, pottery, and building.

Elders are considered very important in Jola society and are believed to possess occult powers and guard societal traditions. In villages, a council of elders make many of the daily decisions for the community and exert much influence. Despite the patriarchal nature of Jola society, many women played major roles in the community and were often members in village councils, religious leaders, and landowners. Women are also important as cultivators of wet rice fields in which they predominated. Polygamy and genital mutilation are not practiced by the Jola although outside influence has made these more common in certain villages.

The galire is a one-string instrument of the Jola of Thionck-Essyl, with its strings stretched across a single 1 meter curve made of fine mangrove wood. At first sight, it looks like a hunter's bow

It's played with one hand holding a flexible fine string (made of palm leaves) beating on the arc's string, while the other hand holds one end of the arc and adjusts the tune with the thumb. The other end of the arc rests in the mouth of the player, who sings. The vibration from the player's song on the string of the arc and the beating with the fine flexible string leads to the pleasant and characteristic sound of the galire.

The exile of young people to cities has led to the stark decline in usage of this traditional instrument among the Jola people of Casamance and the Gambia.

Below is a list of few Jola instruments. Note: The Jola language of Thionck Essyl is used to name them. Their names may differ somewhat in other villages' languages.

These megaliths were built by the ancestors of the Serer people or of the Jola.

The Serer and Jola people believe in a common ancestry and have joking relationship with each other which they assign to their ancient shared cultural heritage. According to the legend of Jambooñ and Againe (an ancient Serer and Jola legend), two sisters boarded a pirogue with their parties. Due to act of nature, the pirogue broke into half at the Point of Sangomar. Those who headed south became the ancestors of the Jola (descendants of Agaire) and those who headed north became the ancestors of the Serer people (descendants of Jambooñ). The Point of Sangomar is one of the sacred Serer sites.

n the mid-1440s the diverse folk population of the Senegambian region faced violent disintegration of its people, and their rich diverse cultures, by the Portuguese, the first Europeans who set out to seek slaves in Africa to sell to the New World. These Europeans came by medium size boats that they used to navigate both the Gambian river and the Casamance rivers, since there were no infrastructures at this time to travel by land, invaded and took them to work in Spain and in Portugal. Later in the sixteenth century, when these European realized that they could make enormous profit by using the labour of the Africans to exploit the wealth of the Americas they started selling the African slaves to North America, Central America, South America, and the Caribbean countries to provide slave labour in the gold and silver mines and on the agricultural plantations, growing crops such as sugar, cotton, rice, and tobacco.

From 1445 to 1600 about one million Africans were taken from the West African region, particularly from the Senegambian region. The ethnic groups that suffered most during this slave aggression were those living along the coastal areas of the river Gambia and the river Cassamance, and these are the Manjagos, the Balantas, the Papels and the Jolas. There is still a very old saying among the elderly Jolas that the music of the Akonting in its initial stage was so sweet to the devils that the most outstanding Jola Akonting players who played late at night in the rice fields when work was suspended for the day and it was time to play the Akonting and dance and drink their palm wine until they got tired and then came home, that most of these Akonting players did not come home. On the following day when the people went out to search for them they saw prints of shoes on the ground which they associated with feet of devils because in those days Jolas didn't use shoes or know what shoes looked like. This is how the Jola Ekonting came to the Americas.