The Twas live in symbiosis with these Bahutus in the immense basin located on left bank of the Congo River, in the area between the Maïndombe and Tumba lakes.

Lokonda, the language of the Ekonda people, does not have a terminology that explicitly distinguishes them, as is also the case for almost all sub Saharan languages. Besides, it may be passing that this question of classification relates more directly to local conceptions of life and of cosmology rather than being a mere linguistic identification.

Society and culture of Mongo

Given the equatorial forests they live in, like neighboring ethnic groups, the Mongo people cultivate cassava, yam and banana as staple foods. This is supplemented with wild-plant and edible-insects gathering, seasonal vegetables and beans, fishing, and hunting. The society is patrilineal, and traditionally based on a joint family household called Etuka with twenty to forty members, derived from an ancestor lineage. The male elder of the Etuka is called Tata (meaning father). A cluster of Etuka form a village of the Mongo people. Disputes and covenants between lineages were typically resolved through goods or inter-marriages. Some sub-ethnic groups found in the southern parts of Congo have had a chief, instead of being a collection of lineages, with the chief known as Bokulaka.

Traditional religion of the Mongo people is largely one of ancestor worship, belief in nature spirits, fertility rites, with shamanic practices such as magic, sorcery, and witchcraft. Mongo artistic achievements, songs, musical instruments and carvings show richness and high sophistication. Like many ancient cultures, the Mongo people have used the oral tradition to preserve and transmit knowledge to the next. Polygamy has been a part of the Mongo culture into the modern age, though missionaries have attempted to curb this part after their conversion to Christianity.

The Ekonde, are known mostly for their elegant copper anklet-form currency, though so little is actually known about them that it is possible that they could also have been worn for special occasions, like weddings. Their infrequent use was most-likely restricted to "bride price" transactions, serving not only as gifts between families but also to settle disputes which might arise surrounding the subject of marriage. They essentially are "prestige" objects.

This people’s culture (Mongo) offers an artistic variety that is of great value, with all kinds of vocal and choreographic forms. Among those forms, the Ekonda ethnic group practises one of the last ancestral rites still in existence called Bobongo.

It is a particularly remarkable show for it brings together singular vocal lines as well as spectacular dances which require especially trained and skilled singers and dancers. Indeed, they actually perform a series of songs and dances, punctuated with various acrobatics that are carried out with perfect order and rigour. Bobongo, through dance and music, echoes an aesthetic idealism, which perpetuates traditional and ancestral knowledge that conveys, at the same time, cultural values and sacred forms of worship.

In the present period though, Bobongo is performed by mixed groups (including men, women, boys and girls). All of them perform music and dance with great vitality, expressing both individual and collective creativity and talent, often with rather singular humour. It can be added that the Bobongo performed by Twas is famous for its very energetic style which distinguishes it from the much more hieratic one of Bahutus.

Bobongowas a double ritual: either it marked the passing of a late patriarch or the mourning of a member of the community. As a funerary ritual, it obeyed the same basic rules as for the majority of the rites of the same kind that car be observed amongst various ethnic groups in southern Saharan Africa. It was a spectacular festive ceremony where various choreographies rhymed with multiple vocal forms often performed in combination with au instrumental accompaniment. However, in recent decades, Bobongo is no longer only related to communication with the metaphysical universe, but also to communication with the living.

Consequently, having ancestral rots, it has become a major artistic benchmark characterising the Ekondas’ cultural identity, and also that of Mongos more widely. As far as music is concerned, and from a general point of view, it can be said that Bobongo is a polyphonic musical genre in which out of phase exchanges and repetitions are very typical. 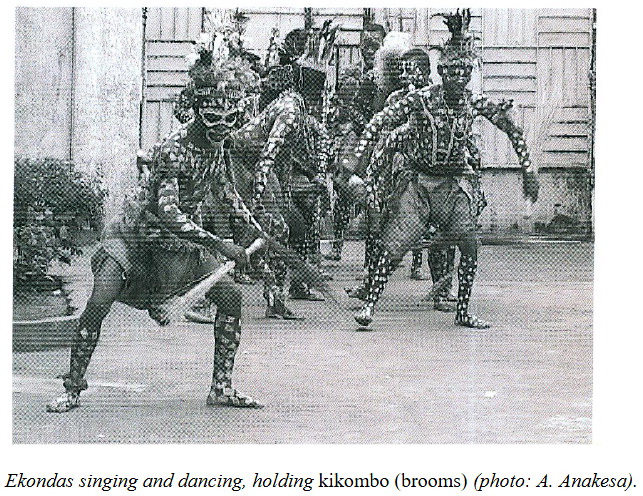 1st phase: Baasa and Wamba
Baasa deals with the invocation of geniuses and provides a link to Wamba during which, initially, the group arises, boasts its merits and defends its honour, and then it proceeds to narrate various tales, such as historical proverbs, stories, quotations, metaphors and poems.

2nd phase: Bobongo (songs and poetry)
The second part, which is the central part and the musical core of Bobongo performance, grants importance to songs and poetical declamations; it corresponds to the development of Bobongo.

3rd phase: Iyaya (choreographic part)
This phase primarily deals with lifting dances—dancers lifted up by each other supported by rhythmic songs with instrumental accompaniment. During this phase, one or more solo dancers emerge from the stage. They alternatively leave the group, before joining it again, with performances that are at the same time displays of virtuosity and of very great buffoonery.

4th phase: Ibuleyo (conclusion)
The name of this segment is that of a kind of wooden scaffolding, equipped with moving parts that are in fact wooden nacelles of various forms, with panels which are able to slip along die beams. By this means, acrobats’ car be horizontally swivelled or rocked, or vertically thrown up in the air by the others, to be caught just before they reach ground level. The mechanism of the ibuleyo is always kept secret until die very last moment, exactly when the scaffolding builder cuts the liana which maintains the balance and stability of its construction. The public awaits this moment with much interest. The final moments of the Bobongo spectacle offer a singular and kaleidoscopic lifting event: some dancers are either perched at die top of a human pyramid that they hastily form or are installed in a kind of gondola at the top of that scaffolding structure which car be as high as ten. Acrobats, at the top of this human pyramid, find themselves indeed thrown in the air, and then suddenly caught while they fall at approximately one metre above the ground level and then horizontally rocked to and fro.

The Bobongo show may last for some hours according to its situation and circumstances. The Bobongo ritual for mourning, for example, begins in the evening before 10 p.m. and does rot end until 6 or 7 a.m. the following day. At an artistic level, the situation of arduous and deep rooted competition, or rivalry, between various Bobongo groups maintains a constant zeal among performers, which contributes to the development of a musical language with a renewed form and style. From this viewpoint, the nyangiobongo reconsiders, for each show, the components of its performance to best adapt it to die particular circumstances. This perpetual artistic enrichment relates to the textual content of narrations, die polyphonic topics and structures of songs, the various choreographic aspects as well as the final mechanism of the ibuleyo. 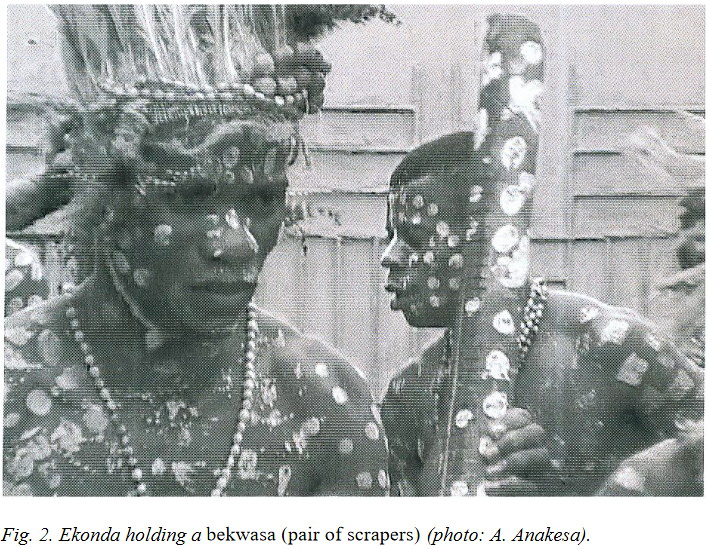