Bushoong are part of the larger Kuba ethnic group and as such have a shared history. While their ancestors migrated into their current location from opposite directions, they have together carved out a unified kingdom that recognizes as the rulers of the land those descended from the 16th century Bushoong leader, King Shyaam.

Bushoong migrated from the north and are closely related to the southern Mongo peoples. Upon arrival in their current location they found Twa and Kete peoples, both of whom have been absorbed into the larger Kuba Kingdom.

The rivers which bound the Kuba territory provide fish, which is normally consumed in the region where it is caught. They also farm maize and cassava, both of which were imported from the new world. The Kuba weave beautiful raffia cloth which is embroidered by the women and traded to surrounding areas.

The leader of the Kuba peoples is always Bushoong and rules from the Kuba capital, Nsheng. The Nyim (king) is assisted in his duties by over a hundred advisors who are representative of the people of the kingdom. Individual villages each have a leader who must answer to the Nyim and is responsible for instituting his rulings. The king's position of power is considered supreme, as he is a direct descendant of the mythical unifier of the Kuba, King Shyaam. There have been twenty-one successive rulers since Shyaam, and the kingdom has been relatively stable throughout the 400 years of its history.

The Kuba oral history tells of the creation of the world by Bumba, who dictated that the Bushoong would always be the ruling class. This creator god is not formally worshiped. At one time the Kuba had a religion based on ancestor worship, but this seems to have died out, although divination is still practiced in order to discover causes of evil. Success during hunting is recognized as a gift from the gods. It is not incidental that diviners often employ carved wooden hunting dogs as rubbing oracles in order to arrive at their knowledge. Dogs are seen throughout the region as responsible for delivering the will of the god, whether through hunting or through the diviner.

As might be expected, art that can be directly attributed to the Bushoong is almost always used to validate rule. Ndop (portraits of rulers) are perhaps the best known of the Bushoong royal arts and are used as mnemonic devices to remember Kuba history and to transfer power from one king to the next. Other royal regalia includes exquisitely carved drums, drinking horns, stools, knives, staffs, and fly whisks, among other things. 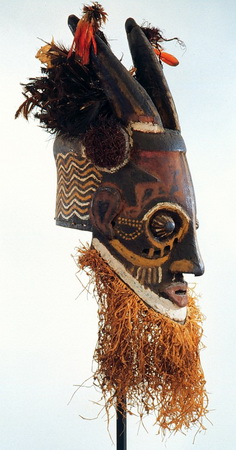 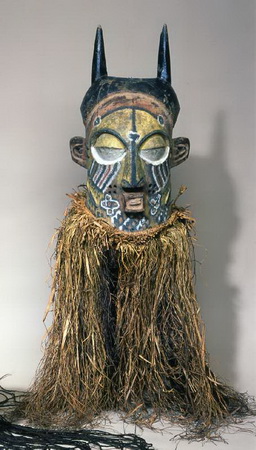