[Go to extended information from other sources]

The Baka people, known in the Congo as Bayaka (Bebayaka, Bebayaga, Bibaya), are an ethnic group inhabiting the southeastern rain forests of:

They are sometimes called a subgroup of the Twa, but the two peoples are not closely related.

Although the Baka people are located throughout the Central African rain forest, they are mainly concentrated in Cameroon as the Baka community of Cameroon represents roughly 30 000 individuals.

The Baka people are the principal hunter-gatherers of the tropical rainforest of Northern Gabon. Groups establish temporary camps of huts constructed of bowed branches covered in large leaves (though today more and more homes are constructed following Bantu methods).

The Baka hunt and gather their own food. The men hunt and trap in the surrounding forest, using poisoned arrows and spears to great effect. The men also welcome the help of dogs when going on hunting excursions. 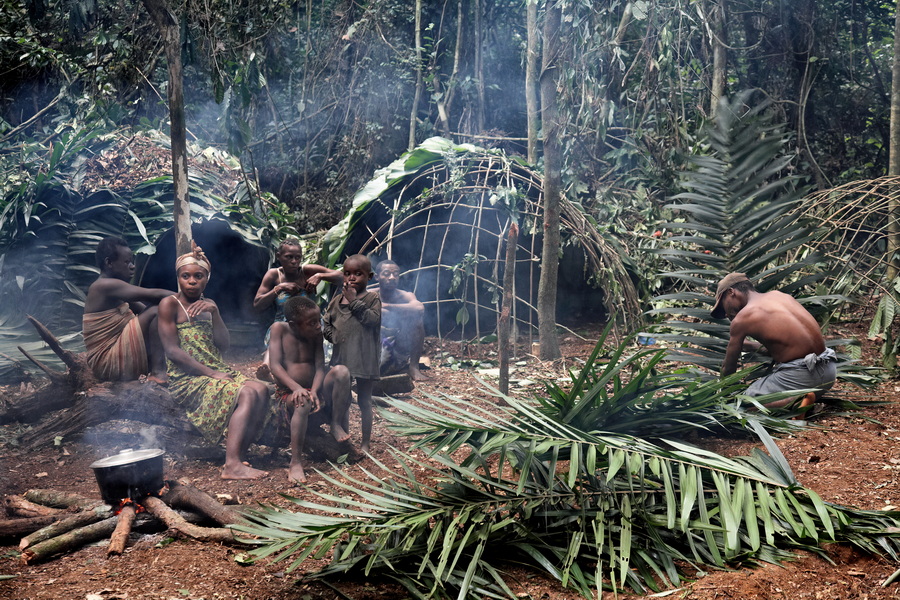 Fishing is very important in Baka culture as young boys are taught to use fishing rods at a young age. The men fish using chemicals obtained from crushed plant material. Using fast-moving river water, they disperse the chemical downstream. This non-toxic chemical deprives fish of oxygen, making them float to the surface and easily collected by Baka men. Another method of fishing, performed generally only by women, is dam fishing, in which water is removed from a dammed area and fish are taken from the exposed ground. Children and adolescent-girls often accompany the women when they go fish-bailing in nearby streams. More than only fishing with adults, their job is also to help the women by watching over the infants while they fish. Women cultivate plants, such as plantains, cassavas and bananas, and practice beekeeping. The group remains in one area until it is hunted out. It then abandons the camp and settles down in a different portion of the forest. The group is communal and makes decisions by consensus.

Baka Pygmy music consists of up to four parts and can be described as an "ostinato with variations" similar to a passacaglia in that it is cyclical. It is based on repetition of periods of equal length that each singer divides using different rhythmic figures specific to different repertoires and songs. This creates a detailed surface and endless variations not only of the same period repeated but of various performances of the same piece of music. As in some Balinese gamelan music these patterns are based on a super-pattern which is never heard. The Baka themselves do not learn or think of their music in this theoretical framework, but learn the music growing up.

Polyphonic music is only characteristic of the Baka Pygmies.

Liquindi is water drumming, typically practiced by Baka Pygmy women and girls. The sound is produced by persons standing in water, and hitting the surface of the water with their hands, such as to trap air in the hands and produce a percussive effect that arises by sudden change in air pressure of the trapped air. The sound cannot exist entirely in water, since it requires the air-water boundary as a surface to be struck, so the sound is not hydraulophonic.

The Baka worship the forest spirit called Jengi (also known as Djengui or Ejengi). The spirit plays the role of the mediator between the Supreme Being, Komba, and the Baka people. The Baka thus compare Jengi to a protecting father or guardian. They strongly believe and revere Jengi as they believe that he is the only way to Komba. The Baka people believe Jengi to be omnipresent within the forest allowing him to punish transgressors within the confines of the forest. Ultimately, the Baka worship nature as it is Komba, not Jengi that resides in it.

After hunting successfully, the Baka worship Jengi with songs of thanksgiving and dancing in a ritual called Luma. These rituals are necessary for Jengi to appear before the Baka, as they believe that he only shows himself when harmony reigns among the villagers. Jengi also appears during the important ceremony, Jengi, where a young man goes from being a boy to a man. During these ceremonies, young Baka men volunteer to be initiated by Jengi. Once they are initiated, they have the right to live and walk freely within the sacred forest.

Death is considered to be a misfortune for the Baka. They deem the death of one of their own to be a representation of spiritual discord. Each tribe, having witnessed the death of one of their own, is required to pray to Jengi and dance around the debris covered corpse for an entire night. The dance performed during the death rituals is called the Mbouamboua. After a long night of dancing, the villagers depart from where they were stationed, leaving the corpse behind, and set out to move somewhere else in order to flee the curse.