The wealthy, gold-rich Asante people developed the large and influential Ashanti Empire, along the Lake Volta and Gulf of Guinea. The empire was founded in 1670, and the Asante capital Kumasi was founded in 1680 by Asantehene (emperor) Osei Kofi Tutu I on the advice of Ɔkͻmfoͻ Anͻkye, his premier. Sited at the crossroads of the Trans-Saharan trade, the Kumasi megacity's strategic location contributed significantly to its growing wealth. Over the duration of the Kumasi metropolis' existence, a number of peculiar factors have combined to transform the Kumasi metropolis into a financial centre and political capital. The main causal factors included the unquestioning loyalty to the Asante rulers and the Kumasi metropolis' growing wealth, derived in part from the capital's lucrative domestic-trade in items such as gold, slaves, and bullion.

In the Asante dialect of Twi, Asantefo; singular masculine: Asantenibarima, singular feminine: Asantenibaa. The name Asante "warlike" is traditionally asserted by scholars to derive from the 1670s as the Asante went from being a tributary state to a centralized hierarchical kingdom. Asantehene Osei Tutu I, military leader and head of the Asante adwinehene clan, founded the Asante Empire. Osei Tutu I obtained the support of other clan chiefs and, using Kumasi as the central base, subdued surrounding Akan states. Osei Tutu challenged and eventually defeated Denkyira in 1701, and this is the asserted modern origin of the name.

The Ashanti Region has a variable terrain, coasts and mountains, wildlife sanctuary and strict nature reserve and national parks, forests and grasslands, lush agricultural areas, and near savannas, enriched with vast deposits of industrial minerals, most notably vast deposits of gold.

The territory Ashanti people settled is home to a volcanic crater lake, Lake Bosumtwi, and Ashanti is bordered westerly to Lake Volta within the central part of present-day Ghana. The Ashanti (Kingdom of Ashanti) territory is densely forested, mostly fertile and to some extent mountainous. There are two seasons—the rainy season (April to November) and the dry season (December to March). The land has several streams; the dry season, however is extremely desiccated. Asante region is hot year round.

Today Ashanti people number close to 3 million. Asante Twi, the majority language, is a member of the Central Tano languages within the Kwa languages. Ashanti political power combines Asantehene Otumfuo Nana Osei Tutu II as the absolute ruler and political head of the Ashantis and the Ashanti Region, with Ashanti semi-one-party state representative New Patriotic Party, and since the Ashanti Region (and the Kingdom of Ashanti) state political union with Ghana, the Ashanti remain largely influential.

Ashantis reside in Ashanti and Brong Ahafo Regions in Ghana. Kumasi metropolis, the capital of Ashanti (Kingdom of Ashanti), has also been the historic capital of the Ashanti Kingdom. Ashanti region currently has a population of 11 million (11,000,000).

Today, as in the past, the Ashanti Region continues to make significant contributions to Ghana's economy. Ashanti is richly endowed with industrial minerals and agricultural implements, Ashanti is responsible for much of Ghana's domestic food production and for the foreign exchange Ghana earns from cocoa, agricultural implements, gold, bauxite, manganese, various other industrial minerals, and timber. Kumasi metropolis and Ashanti region produces 96% of Ghana's exports.

Ashanti culture celebrates Adae, Adae Kese, Akwasidae, Awukudae and Ashanti Yam festival. The Seperewa, a 10-14 stringed harp-lute, as well as the Fontomfrom drums, are two of the typifying instruments associated with the Ashanti as well as the Ashanti Kente clothing.

Ashanti are a matrilineal society where line of descent is traced through the female. Historically, this mother progeny relationship determined land rights, inheritance of property, offices and titles. It is also true that the Ashanti inherit property from the paternal side of the family

Though not considered as important as the mother, the male interaction continues in the place of birth after marriage.

Historically, an Ashanti girl was betrothed with a golden ring called "petia" (I love you), if not in childhood, immediately after the puberty ceremony. They did not regard marriage "awade" as an important ritual event, but as a state that follows soon and normally after the puberty ritual. The puberty rite was and is important as it signifies passage from childhood to adulthood in that chastity is encouraged before marriage. The Ashanti required that various goods be given by the boy's family to that of the girl, not as a 'bride price', but to signify an agreement between the two families.

In the cataloguing of Ashanti familial and legal systems in R.S. Rattray's Ashanti Law and Constitution Ashanti law specifies that sexual relations between a man and certain women are forbidden, even though not related by blood. The punishment for offense is death, although it does not carry quite the same stigma to an Ashanti clan as incest. Sexual relations between a man and any one of the following women is forbidden:

The Ashanti language and Ashanti Twi have some unique linguistic features like tone, vowel harmony and nasalization.

The Ashanti follow Akan religion and the Ashanti religion (a traditional religion which seems to be dying slowly but is revived only on major special occasions - yet is undergoing a global revival across the diaspora), followed by Christianity (Roman Catholicism, Anglicanism and Protestantism) and Islam.

The Akwasidae ceremony is usually held at the beginning of each Ashanti month (which lasts about 40 days) to pay tribute to ancestors and to the king, and takes place at the royal palace of Kumasi with the participation of thousands of people. The celebration begins with the arrival of the various delegations, accompanied by colored umbrellas, representing the tribes in the Ashanti region. 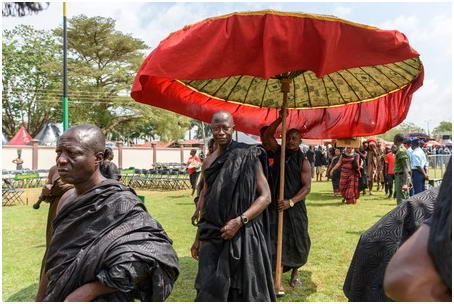 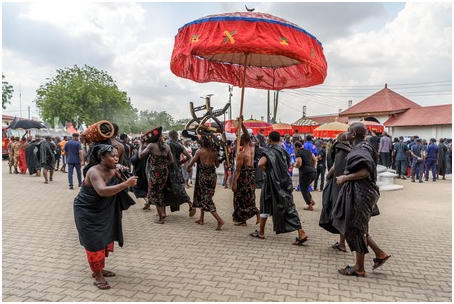 The rites on this day relate to honouring personal and community ancestors. A gathering called Akom occurs in which drumming, dancing and singing are a normal celebration to honour Abosom (lesser gods in the Akan tradition) and Nsamanfo (spiritually cultivated ancestors) Food offerings include special items such as eto (mashed African yam), garnished with hard-boiled eggs. Every Ashanti celebrates this festival. For those Ashanti who do not observe the festival of Odwira, the Akwasidae is very important to commemorate their ancestors.

On this day, the Asantehene (King of Ashante) meets his subjects and subordinate chiefs in the courtyard of the Manhyia Palace. The Golden Stool (throne) is displayed at the palace grounds in the presence of the king, and people visit in large numbers, singing and dancing. The king holds his durbar on the occasion of the festival, and people have the liberty to shake hands with him. Before holding the durbar, the king goes in a procession in a palanquin decorated with gold jewelry. He also witnesses a colourful parade, from his palace grounds at Kumasi. Participants of the parade include drum beaters, folk dancers, horn-blowers and singers. As it is festival of paying respect to ancestors, the king visits the Bantama Mausoleum and offers worship not only to his ancestors' chairs (stools), but also to the skeletal remains of his ancestors. It is argued that, the king do not worship the stools and the ancestors, however to pay them homage.

The royal family with the king, queen and guards in their traditional clothes. The king and queen usually wear sumptuous jewelery made with gold, of which the region is rich, each with precise meanings related to their culture and traditions. 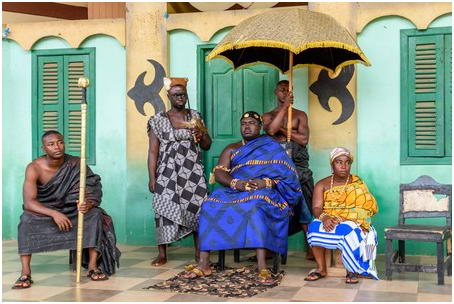 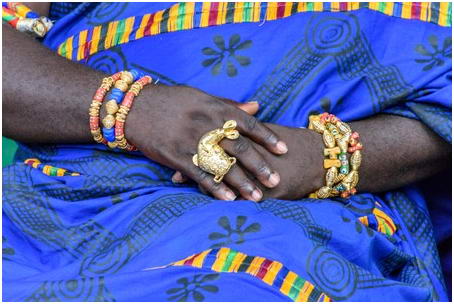 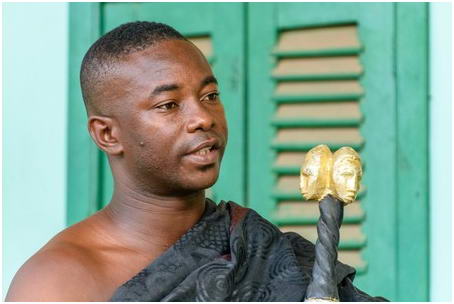 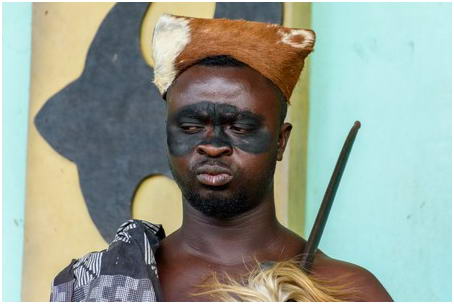 The various Ashanti delegations, representatives of the tribes, who come from all over Ghana (and sometimes also from other neighboring countries). 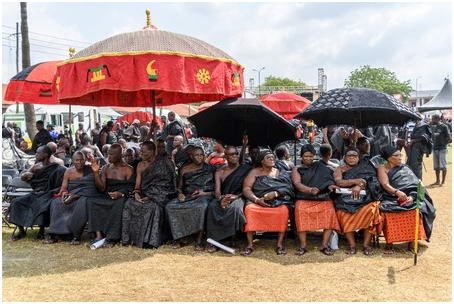 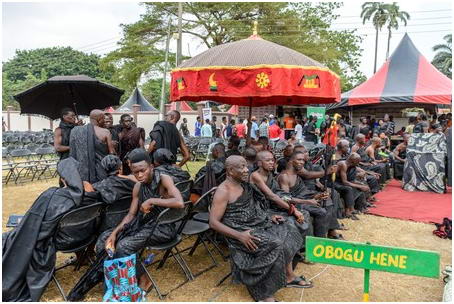 The dances with the drum roll and the sound of the ivory trumpets. 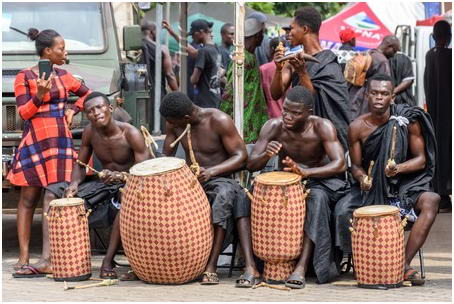 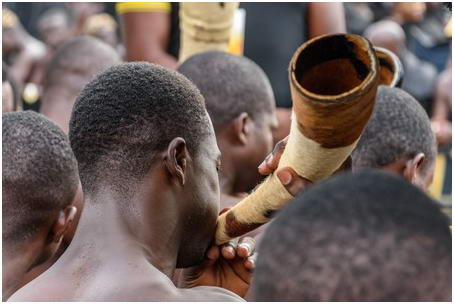 The black umbrella as a sign of mourning for the Ashanti Queen passed away the year before. 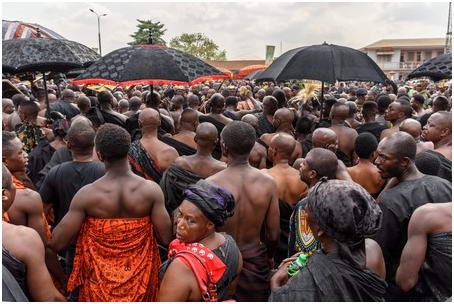 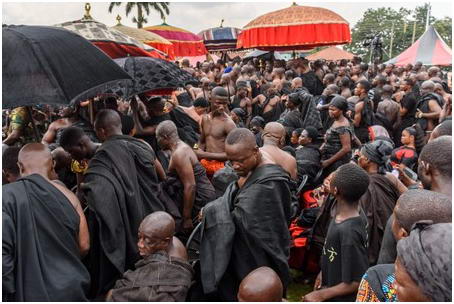 Around the Ashanti King the participants to Akwasidae festival and the delegations of the various tribes, which can be identified according to the patterns on the clothes, on the hat and on the cane. 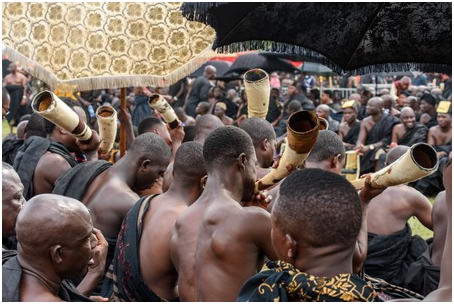 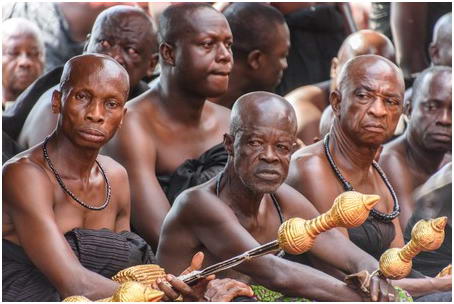 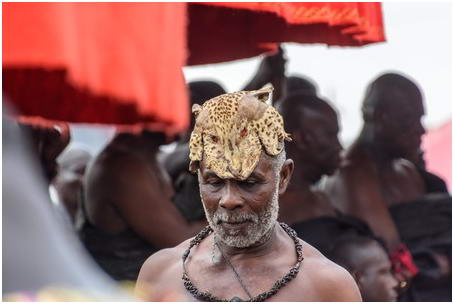 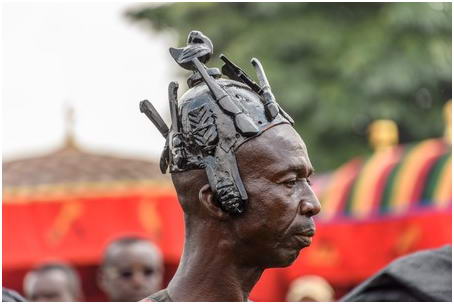 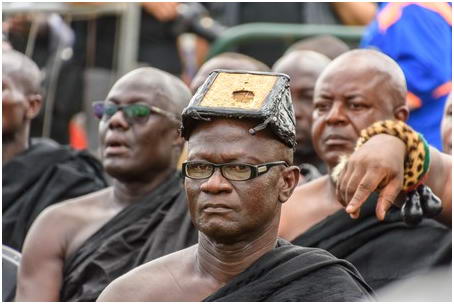 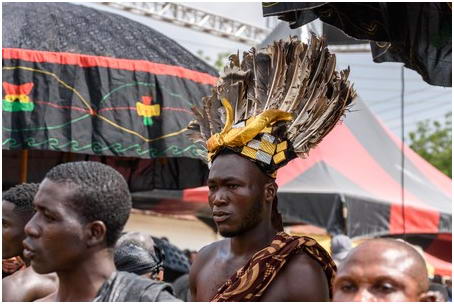